Photos From Wendy’s Family Trip to the Silk Road 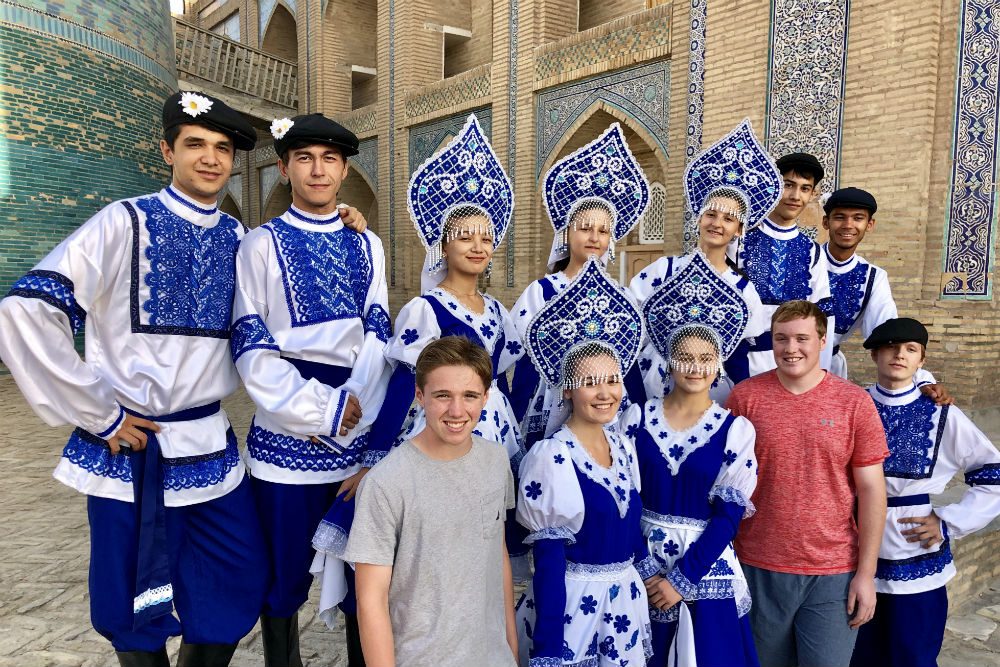 We met this teen dance troupe in Khiva, where they were competing with young performers from other parts of Uzbekistan as part of the annual Melon Festival.

I’m just back from a trip to Central Asia that was packed with UNESCO World Heritage Sites that we had almost to ourselves and neighborhoods so unchanged for centuries—so relatively undeveloped for tourists—that it felt like we had traveled back in time.  The highlights of our Silk Road adventure were Khiva, Bukhara, and Samarkand—legendary cities that have been a crossroads of cultures for 2,500 years and today belong to the 28-year-old country of Uzbekistan.

The Uzbek people have a strong innate tradition of hospitality toward guests and see so few foreign visitors that, we found, travelers are a curiosity who are welcomed enthusiastically. Most of the tourists in Uzbekistan are from France, Italy, Germany, Spain, Japan, and South Korea, and the few visiting Americans tend to be on group tours, so the locals were especially thrilled to meet Americans (us) who were not in a group and on whom they could practice their English.  We were able to enjoy a variety of spontaneous surprises and fascinating encounters, simply because we were American.

I shot this video with my iPhone at a dress rehearsal for the International Music Festival that is taking place in the magnificent Registan Square in Samarkand, August 25 – 30, 2019.

As an example, one evening when we were people-watching outside the Registan in Samarkand, we and other foreigners standing there were suddenly invited into a special seating area inside the Registan to watch a dress rehearsal for this week’s International Music Festival (see video above).   On another evening, also in Samarkand, we were walking home from dinner and passed by a reception hall with a party going on; some partygoers spotted us and invited us inside, where we were wined and dined and treated as honored guests, just because we were Americans in their country.  Below you’ll find photos and videos of these highlights and more, taken from my Instagram feed.  Be sure to click on the audio icon in the videos, so that you hear the music we did!

Anyone who thinks Uzbekistan might not be safe for travelers or friendly toward Americans simply hasn’t been there and experienced it for themselves.  Our trip was arranged by the Silk Road travel specialist on my WOW List, Zulya Rajabova. Zulya grew up in Uzbekistan and worked as an interpreter and guide there for visiting heads of state before starting her U.S.-based travel company.  If you would like a trip like mine, I recommend reaching out to her via this questionnaire, so that she knows I sent you and you’re recognized as a VIP  traveler, and so that I can follow your trip-planning process and advise you along the way.

UNESCO named the entire historic center of Bukhara a World Heritage Site, saying that “Bukhara is the most complete and unspoiled example of a medieval Central Asian town which has preserved its urban fabric to the present day.” In a world where so many historic cities are suffering the effects of overtourism, it is a delight to be in a place where the sights are blissfully uncrowded; there are no lines anywhere; and there is not one shlocky souvenir stall with junk made in China. Instead, the souvenirs on sale are from artisans (painters, calligraphers, woodworkers, embroiderers) whom you can watch practicing their craft (see video), then request something custom-made and they’ll make it on the spot for you. And it will be gorgeous, ready within minutes, and cost one-tenth what you would have imagined. 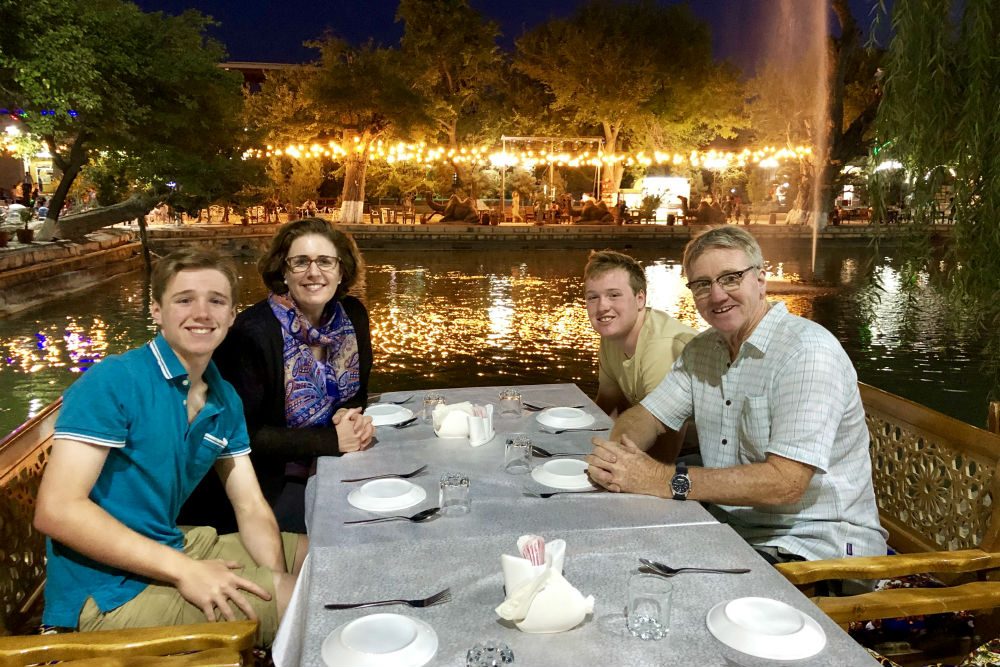 This is our favorite spot in the ancient Silk Road city of Bukhara. Lyabi Hauz is the Old Town’s main square, built in 1620 around a pond lined with mulberry trees. It’s such a lively, peaceful, joyful, thoroughly local scene.

Sights and sounds from today’s Friday prayers at the Bolo Hauz Mosque. Bukhara was the largest center for Muslim theology between the 9th and 16th centuries, according to UNESCO, which has named the entire historic center of Bukhara a World Heritage Site. This was the emir’s official place of worship in the 1700s.

The littlest girls in @silkroadtours’ family welcomed us to their home in Bukhara with this dance.

This is our caravanserai-turned-inn in the heart of Bukhara’s UNESCO-protected old town. Finally, an historic-center hotel in Uzbekistan with halfway-decent Wi-Fi (if only in the courtyard) and enough electrical outlets! @minzifa_hotel @silkroadtours

The downside of caravanserai living. (Actually, Bukhara has my favorite doors since Aleppo. Swipe to see two of them.)

The 2,500-year-old Silk Road City of Khiva is a feast for the eyes.

Khiva’s Old City at night. Three of these photos I shot at the entrance to our hotel (the Orient Star), two on the terrace of La Terrassa restaurant. Thank you, @silkroadtours, for recommending both!

Today in Khiva is the annual Melon Festival. All the different districts in Uzbekistan’s Khorezm province compete in it. The dance and song competitions are boisterous, the melons are the sweetest and juiciest I’ve ever tasted, the hospitality extended toward Americans is extraordinary (we were invited into many districts’ tents to taste their melons and other treats), and the whole scene is a blast. Enjoy these photos and videos from the Festival.

Lunch in Khiva. What you see below the burek platter are yellow figs, unbelievably juicy and sweet. #uzbekistan

Today, at the Registan in Samarkand—one of the architectural masterpieces on the Silk Road—we stumbled upon a rehearsal for next week’s International Music Festival happening there. (You can hear part of the concert rehearsal in the video.)

So we’re walking down the street in Samarkand when we pass a grandiose reception hall with a party going on. Because we’re foreigners and they love foreigners here (esp. Americans), they urge us to come in. So we walk in, thinking we’d take a few pictures, and the next thing we know, Doug is at a table being offered cognac and vodka. They seat us at the honored grandfather’s table, place huge amounts of food in front of us and, as always, invite us to dance. Even Tim hit the dance floor, after being handed a microphone to address the entire room. It turned out to be a circumcision party for three little boys—an event in the Muslim tradition that’s celebrated along the lines of a bar mitzvah or wedding.

So last night we’re people-watching outside Registan Square here in Samarkand (because it’s the same crossroads of cultures it’s always been) when Charlie suddenly notices a guard letting a few visitors—foreigners only—through a gate and into a special viewing section with seats. Charlie snakes his way through, then motions to the rest of us to hurry and get inside. We made it through the gate … and got to watch a magnificent dress rehearsal for next week’s International Music Festival. Here’s a tiny taste of it. The Registan was illuminated in Silk Road colors—purple, red, blue, green, gold, pink—to match the colors of the costumes onstage at the time. I’ve never seen so many costumes in one place in my life.

Uzbekistan Railways from Samarkand to Tashkent

Check out all the festive treats being sold today at the Chorsu Bazaar for the Eid al-Adha holiday tomorrow. #Uzbekistan

Bread fresh out of the oven at Chorsu Bazaar in Tashkent. #Uzbekistan

Here’s the oven the bread was baked in. They stick the bread on the sides and ceiling of the oven!

Enjoy the sounds of Uzbekistan!

“Central Asia’s Got Talent” is coming to Uzbekistan in September. (No, we won’t be competing.)

Transparency disclosure:  While my family paid for our airfare to Uzbekistan, most of our travel arrangements on the ground once we arrived were complimentary, thanks to Zulya Rajabova’s connections there.  In keeping with WendyPerrin.com standard practice, there was no request for or expectation of coverage on her part, nor was anything promised on mine. Zulya had been trying to show me her homeland for seven years, and I finally said yes!   Read your fellow paying travelers’ reviews of Zulya’s trips here. 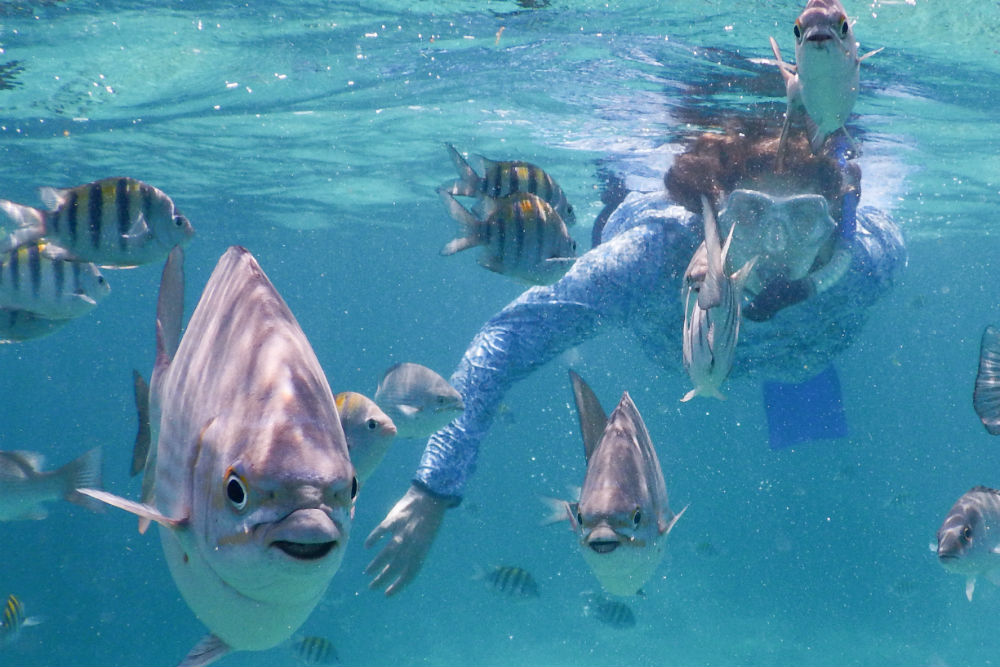 I chose Belize for a recent family trip because the best vacations are those where you try something new you’ve never done before. 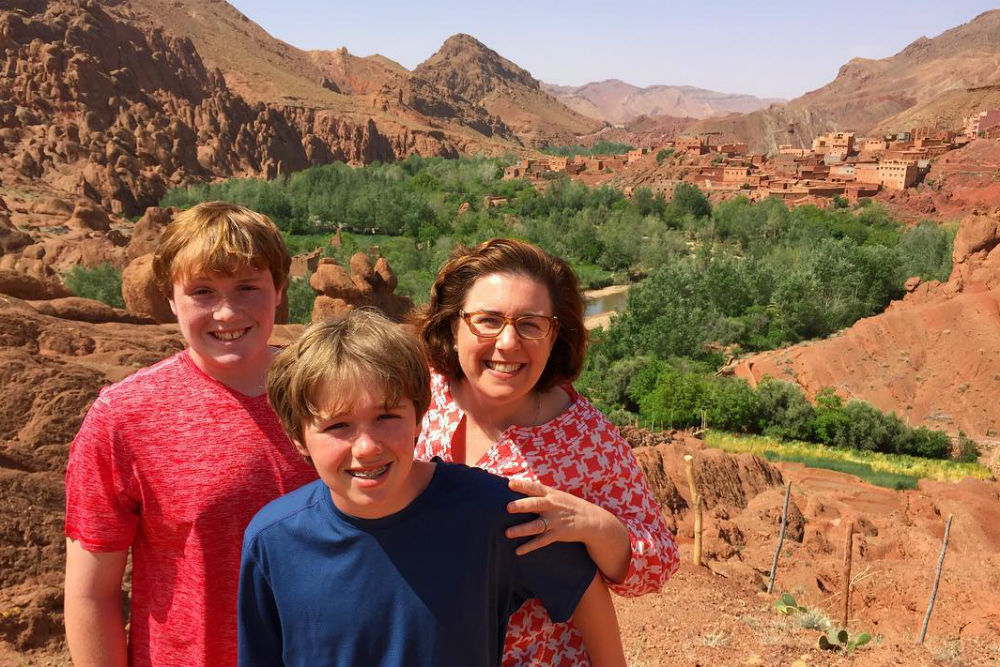 You’ll see a familiar country through new eyes when you show it to kids. I took Tim and the boys to Morocco for spring break this year.

Unusual Ways To See the World by Water

How to Do Europe Travel Now: Q&As with WOW Listers

Authentic Food Markets Worth Traveling the World For