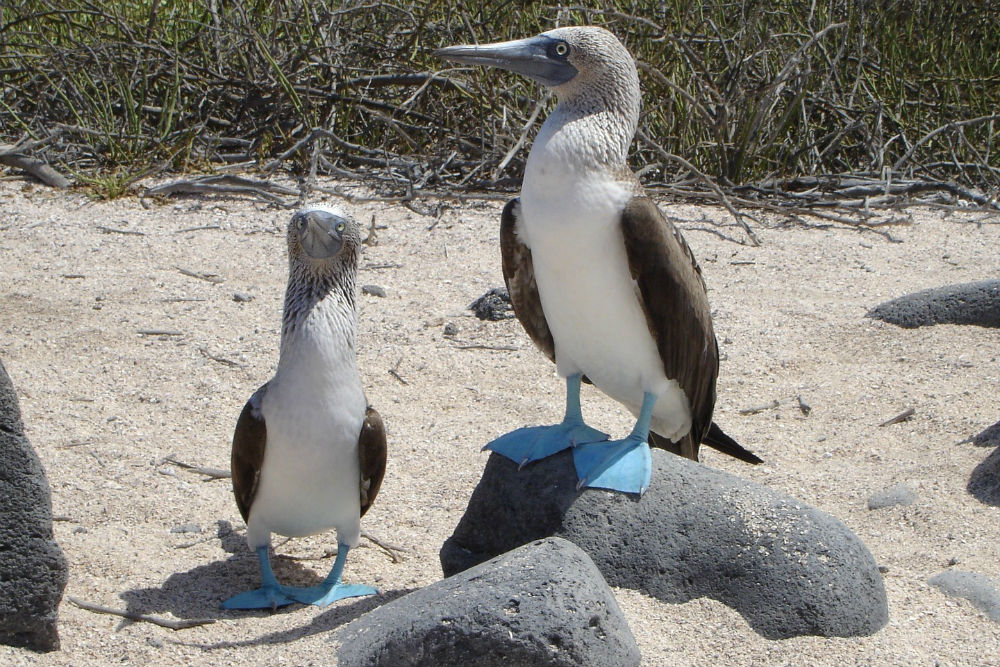 There was one small box left under the Christmas tree, addressed to my husband, my son, and me. Inside was a tiny globe from the dollar store—a symbol, my mother explained, of the trip that she and my father would take us on together. The destination: TBD.

It’s part of my job here at WendyPerrin.com to read every trip review that we receive, so I knew immediately that the Galapagos Islands were a multigenerational crowd-pleaser: The low-effort/high-payoff wildlife sightings were sure to appeal to both my 7-year-old son and my 82-year-father, who bracket our small family, as would the unpack-once ease of a cruise.

The tougher decision was which of the 77 licensed vessels to book for our voyage. Hotels are becoming more and more common on the Galapagos’ four inhabited islands, but we knew that we wanted to visit a wider range of islands than we could see on day trips from land. After all, it’s how species change from island to island that steered Darwin to his theory of evolution, and that has attracted awe-struck visitors ever since—those finches and their multitude of beaks, if you remember a little of biology class. And I’m so glad we went by sea: The moments when we, our shipmates, and a colony of bold sea lions shared an empty beach, with not a single other ship on the horizon, were my favorites of the trip by far, and the time we spent in a handful of towns I found the least enjoyable.

To aid us in narrowing down the options, I reached out to Ashton Palmer, an expedition cruise specialist on our WOW List of Trusted Travel Experts who has spent time in the Galapagos, both with and without his own family of four kids. As Ashton helped us sort through the possibilities, here are the main factors that I learned you need to weigh when picking the right Galapagos experience for your group. Many of these factors, it’s important to note, are drastically different from the considerations you want to weigh when picking an ocean cruise: 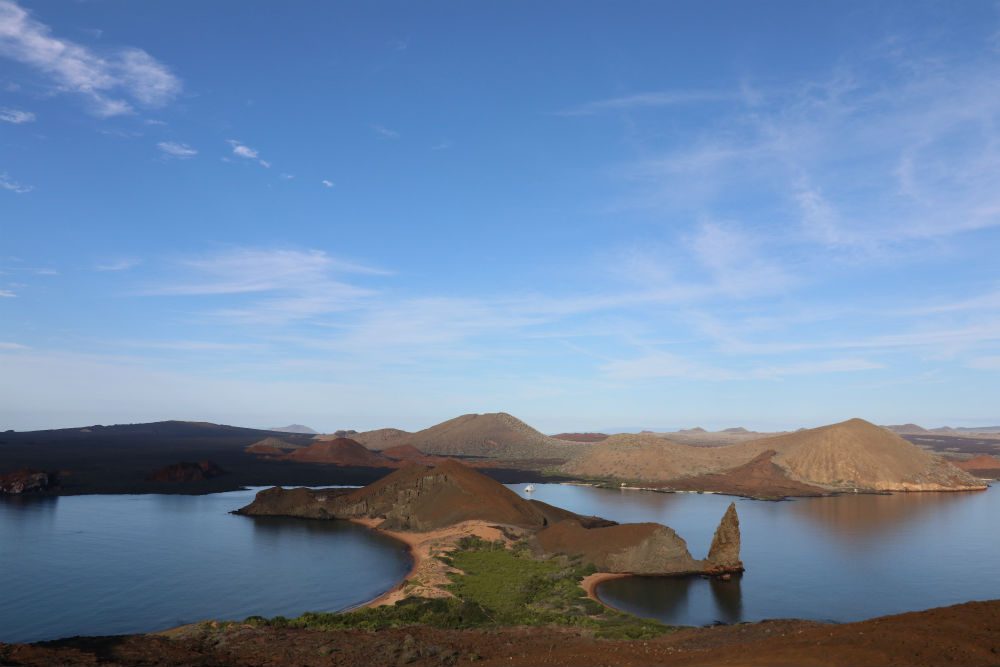 Bartolome Islet and Santiago Island: This is the iconic postcard view of the Galapagos.

Most Galapagos cruises are, for all intents and purposes, almost two days shorter than advertised; that’s because you arrive from mainland Ecuador on the first day and have only the afternoon to explore, and most itineraries don’t include any activities before returning to the airport on the final morning. Anything shorter than a five-day cruise—which includes three full days of excursions—doesn’t give you enough time to properly explore the archipelago. On the other hand, you needn’t look for anything longer than a week: Our cruise lasted six full days, and we saw every major species but one (the flightless cormorant, which is found on only two islands). 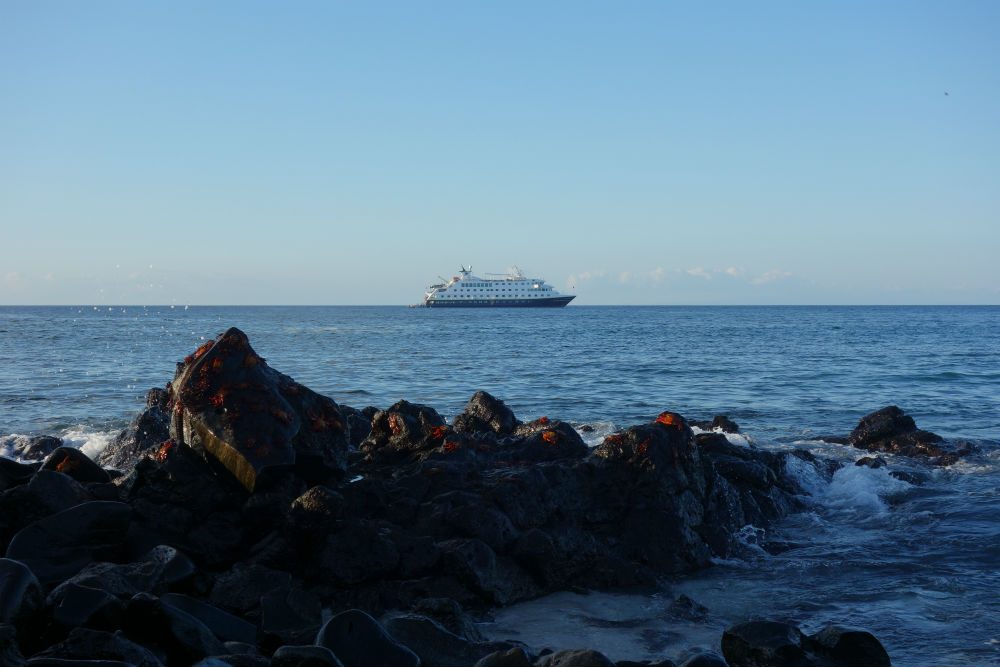 The National Geographic Endeavour II at anchor off Espanola Island. This 96-passenger ship is the biggest allowed in the Galapagos, but tiny by cruise-ship standards—and perfect for our multigenerational group, which ranged in age from 7 to 82.

In many parts of the world, the size of your cruise ship determines which ports you can visit; forget navigating Alaska’s Inside Passage or the hidden gems of the Caribbean on a 5,000-passenger megaship. But in the Galapagos, every vessel can access all the locations where Ecuador’s national park service allows visitors, by anchoring off the island and carrying travelers to land via pangas (small inflatable boats). 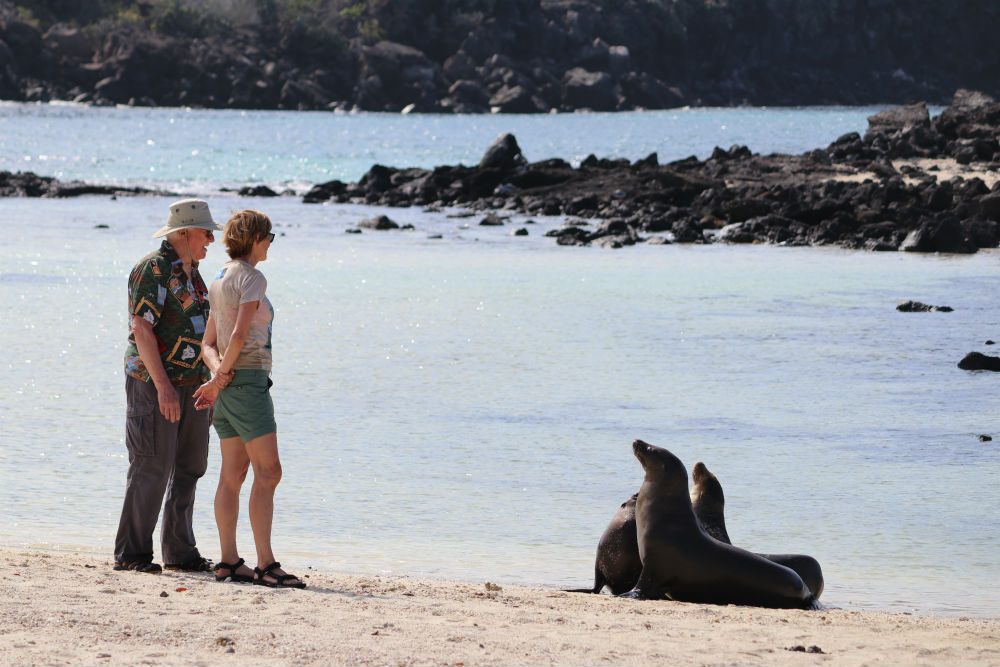 Genovesa Island: Up close and personal with sea lions. 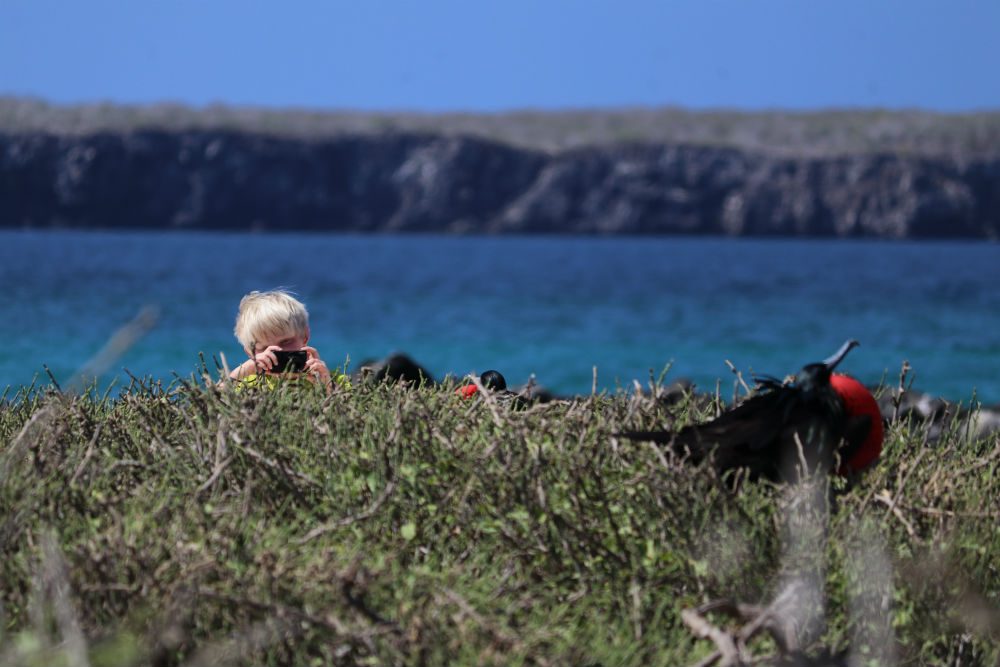 Furthermore, the park service dictates the itinerary of each vessel, and it does so with the marquee attractions in mind. So don’t worry that you’re going to end up on a week-long cruise and miss the giant tortoises or blue-footed boobies. Generally speaking, the longer the cruise, the greater the assortment of wildlife and landscapes you’ll see. Some islands are dusty and have only scrubby vegetation; others are covered by abrasive lava rock and bits of pioneer cactus; still others are cloaked in rain-soaked foliage. But beyond length (or the requirements of a serious birder), there’s not much to make one itinerary superior to another.

3. Size and features of the ship 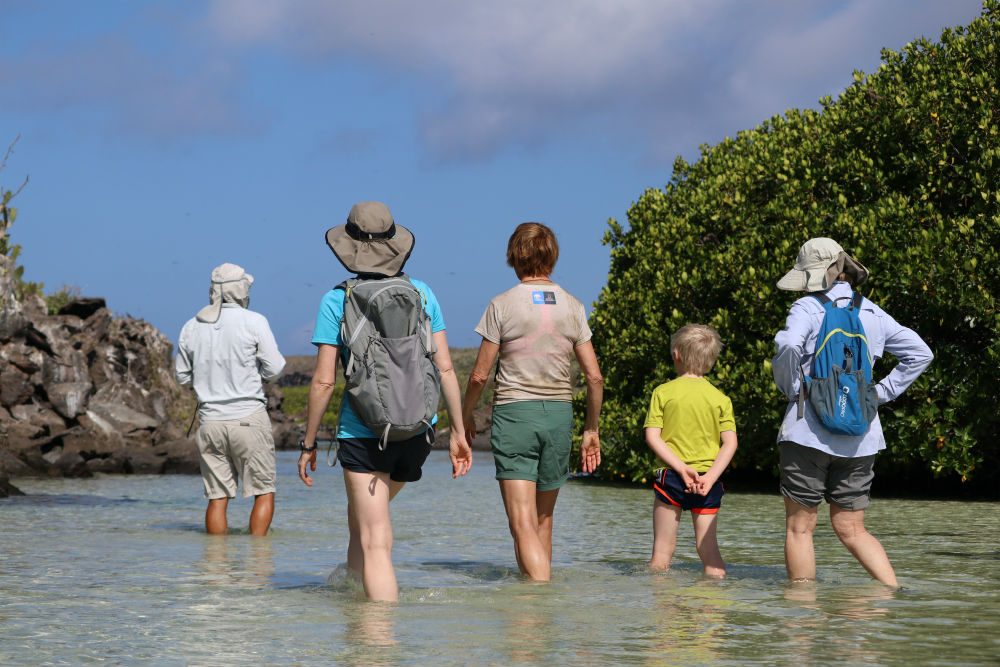 Tourist vessels in the Galapagos range from small yachts that carry just a dozen passengers to expedition ships holding 100. That capacity dictates the number of guides on board, as visitors must be accompanied by a naturalist on every excursion, divided in groups of up to 16. So a 16-passenger catamaran will likely have just one guide and one option of activity per outing (typically hiking, snorkeling, or kayaking). The 96-passenger ship that we settled on, Lindblad Expeditions’ National Geographic Endeavour II, had seven naturalists on board, and every day offered a range of activities to suit different abilities: beach strolls, longer walks, shallow or deep-water snorkeling, and even a glass-bottom boat, which I was surprised to find nearly as rewarding as snorkeling (and with the added benefit of a guide naming each species as it wriggled below you). This proved essential for a family such as ours with varying levels of stamina. Keep in mind, though, that none of the hikes allowed by the park service are more than two to three miles in length; my young son wilted at times in the thick and steamy air, but his little legs never once gave out. 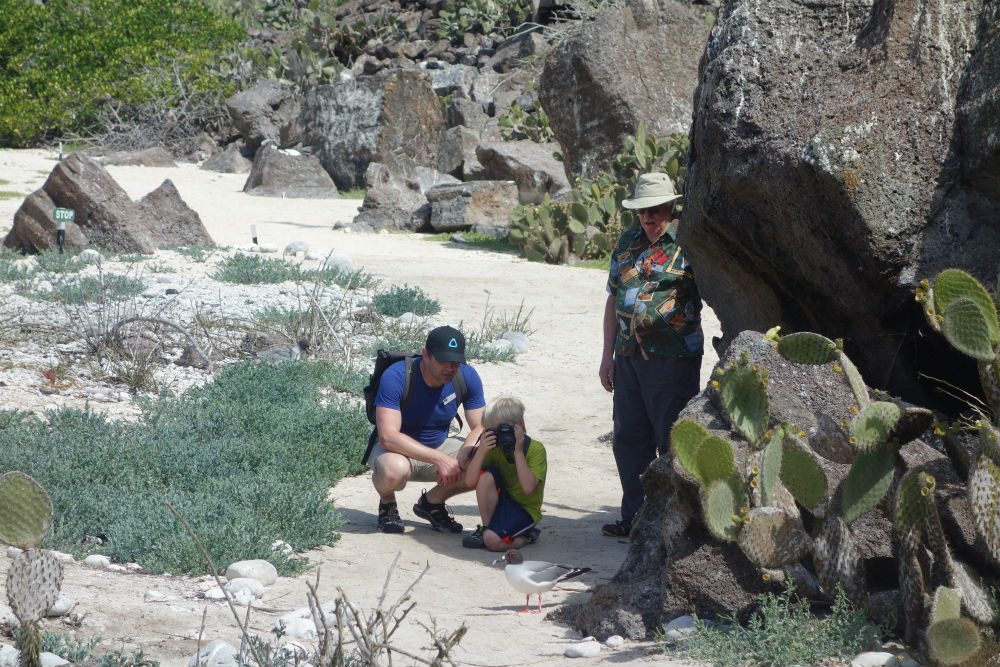 Genovesa Island: Framing a swallow-tailed gull. Some Galapagos walking trails, such as this one, are quite flat, while others require that you boulder-hop among volcanic rocks.

The larger ships also tend to have more creature comforts; our rooms had gorgeous floor-to-ceiling windows, for instance, and the kitchen staff catered to finicky eaters with ease (when the captain dined with us one evening and saw my son receive a special order of pesto pasta, he even requested a bowl for himself). Consider what you’ll actually use, though: A hot tub may sound appealing, but you’ll seldom want to jump in given the year-round humidity; and with two or even three active excursions every day, only die-hards will use a gym. Room to roam onboard can be a boon for families with young kids who might feel cooped up on a small yacht; a larger ships also brings more potential buddies for your children. By day two, my son had blown us off to eat at a kids’ table with a group of new friends.

On a smaller ship, the days unfold a bit more efficiently: You won’t have to wait in line for pangas to start each excursion, and the mandatory park and safety talks are shorter (it’s easier to succinctly convey a message—and answer questions—with a group of a dozen rather than 100). There’s also a bit more flexibility to each day’s schedule, with the opportunity to linger a few minutes longer at a fabulous snorkeling spot or on a deserted beach.

4. Quality of the naturalists 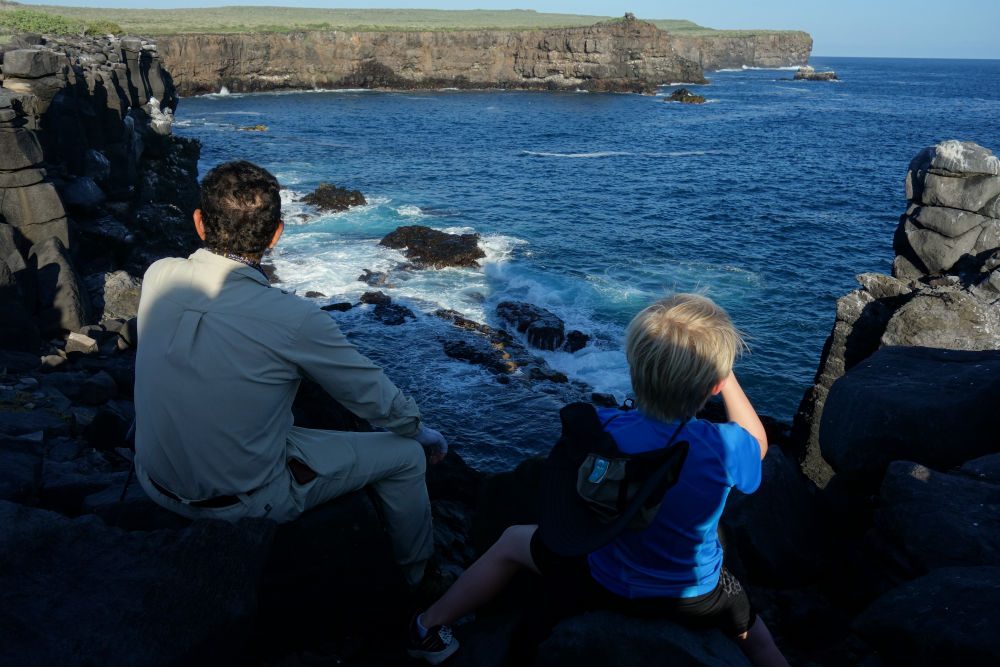 Some cruise operators prioritize the expertise and experience of their guides more than others; this was a factor that attracted us—and just about every other passenger I chatted with on the ship—to Lindblad. The naturalists leading our expeditions had published studies and photographs in scientific journals; started nonprofits to introduce island kids to the Galapagos’ natural wonders (which even locals can only visit with a guide); and consulted on ecotourism projects throughout Ecuador. A knowledgeable Galapagos trip-planning specialist will have cruised on most or all of the vessels they recommend and will know which attract the best-qualified naturalists (almost all of whom are from Ecuador). 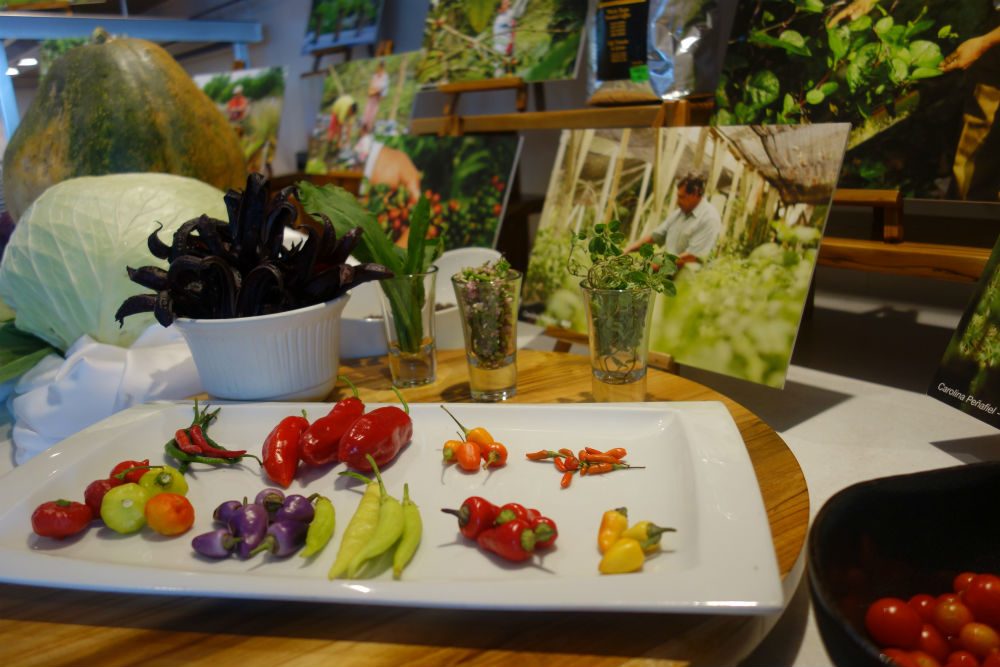 Lindblad Expeditions sources much of the produce served on the ship—including these hot peppers, hibiscus flowers, and herbs—from Galapagos farms. It’s an economic win for locals, and also good practice environmentally: Invasive pests sometimes catch a ride on food shipped in from the mainland.

Tourist vessels in the Galapagos are strictly regulated by the park service, but some cruise operators go above and beyond to be good stewards of this unique environment. Lindblad, for example, has partnered with farmers on the islands to grow much of the produce used on the ships. This not only creates employment opportunities for locals but also avoids introducing invasive pests to the islands (insects can hitch a ride with food shipped over from the mainland). Lindblad will also only serve beer and soft drinks that come in reusable glass bottles (their Ecuadorian craft beer selection is particularly impressive); they stock their gift shops with jewelry, chocolates, and hand-painted t-shirts that are handmade in the Galapagos; and traveler donations to a fund that the company has set up support island conservation and local education. Ask your cruise company what it’s doing to ensure that the Galapagos are preserved for the next generation.

There’s no off-season in the Galapagos: Since the islands are sprinkled around the equator, you don’t get seasonal variations in weather. The ocean currents are a different story, though, and the normally tepid water gets downright chilly—and choppy—in September and October. If it’s animal behavior you’re after, fear not: Something is nesting, mating, and birthing just about every month of the year. While our April departure was dictated by my son’s school schedule, it meant that we saw the waved albatross returning to land on Española Island and great flocks of frigatebirds flouting their bright red neck pouches on Genovesa. Had we visited in December, we would have seen sea lion pups and bottlenose dolphins frolicking in the water. If you’d rather not deal with the chatter of kids on your cruise, avoid spring-break weeks and the summer months. (Of course, if you want playmates for your own children, those weeks are ideal.)

7. Your preference for privacy—or camaraderie 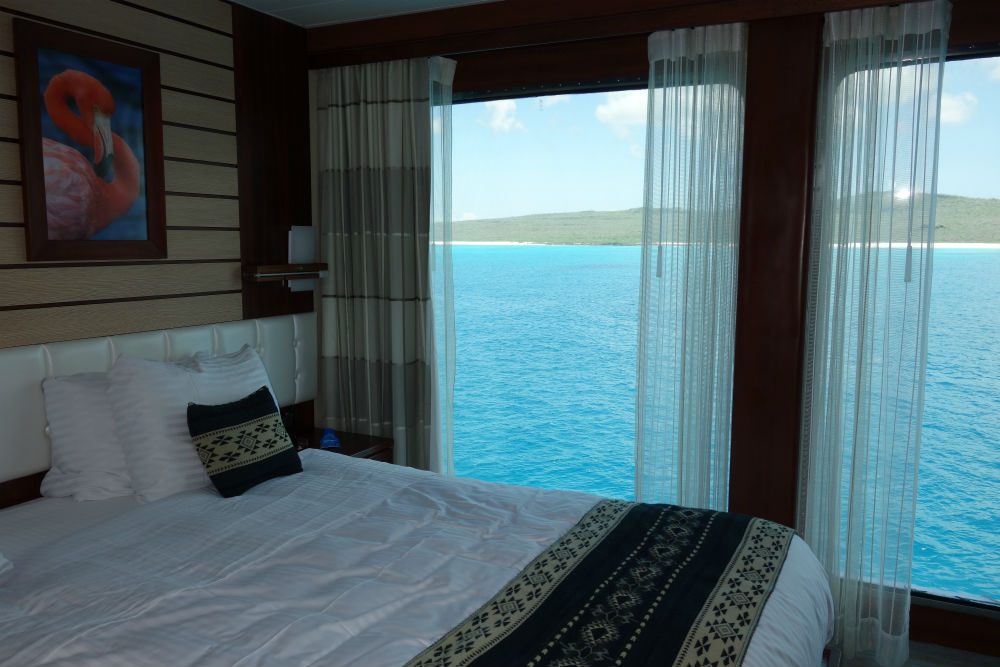 Cabin Tip: The two Suite B cabins are the only ones on the National Geographic Endeavour II with these large windows.

A smaller vessel feels more intimate, and you’ll likely be trading email addresses with your fellow passengers by the end of the trip. If you’d rather keep to yourself, you might actually prefer a larger ship—or, for the ultimate in privacy, a chartered vessel for your exclusive use. Chartering is best done with groups of ten to 20 family members or friends.

When I called Ashton for advice, he asked about our family dynamics and trip goals, and then presented three options: The Origin, a 20-passenger vessel that carries two guides for some of the smallest excursion groups available; La Pinta, a mid-sized, 40-passenger ship; and the National Geographic Endeavour II. We chose the Endeavour II for its extra onboard amenities and wider range of outings. And it was such a terrific fit for us that, within three weeks of leaving the Galapagos, we booked an Alaska cruise on a similarly sized Lindblad ship (this from a family that had never taken a cruise vacation before). Had my parents not been along, I might have preferred the more intimate feel of a smaller vessel, with less time spent waiting in line to board pangas or attending mandatory lectures. But for a multigenerational group such as ours, a larger ship was just the ticket.

There are several travel specialists on The WOW List who know the ins and outs of Galapagos cruising. To be matched with the right one for your needs, write to Ask Wendy. 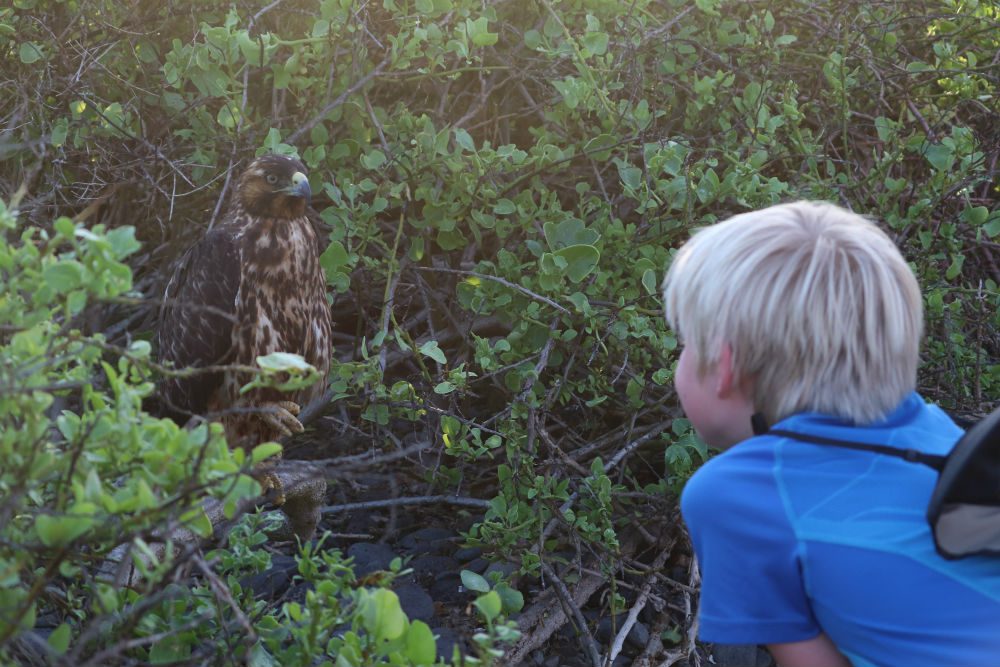 Full Disclosure: Lindblad Expeditions provided this reporter with a reduced rate for her cruise cabin.  In keeping with WendyPerrin.com standard practice, there was no request for or expectation of editorial coverage on Lindblad Expeditions’ part, nor was anything promised on ours.