How to Island-Hop Your Way Around French Polynesia 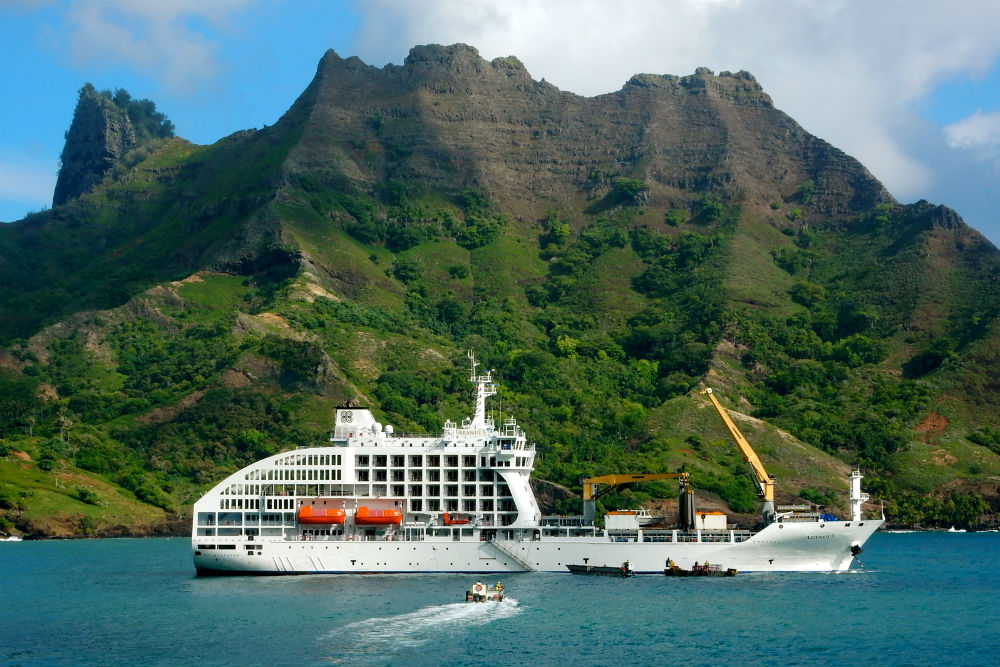 The Aranui 5's route through French Polyneisa's Marquesas Islands includes a stop at Hiva Oa, where you can walk a black-sand beach and see the most impressive collection of tika sculptures outside Easter Island.

So I’m watching a hula competition on YouTube and dreaming about blue lagoons when my husband says, “What about the Marquesas?” The IRS has just sent us a modest refund and we are trying to decide where to spend it.

The Marquesas, Patrick informs me, are a group of volcanic islands northeast of Tahiti in French Polynesia. “They’re remote. Few tourists are going there, so the culture is more genuine. And they’re mountainous, not flat. You can hunt wild pigs.”

A marketing website for Tahiti tourism describes the Marquesas, which are a thousand miles northeast of Pape´ete, as “seemingly lost at the end of the earth.” Patrick’s idea is to fly to Pape´ete and hire a boat—any kind of boat, whatever’s available. Then we will simply island-hop our way around French Polynesia—which encompasses an area roughly the size of Europe—until it’s time to come home.

I should probably mention here that my husband, who is a native Parisian, once hitchhiked down the Amazon from Iquitos to Manaus, a journey of approximately 1,000 miles for which he allowed two weeks. It took him three months. At one point, he was forced to build a raft.

The next morning, after a fitful sleep, I call Kleon Howe, who is not a marriage counselor but a travel specialist with connections in French Polynesia. Most of his clients stick to the resorts in Tahiti, Bora Bora, and Moorea, but when your husband wants to go pig hunting in a “seemingly lost” part of the Pacific, Kleon is the person you call.

Note: Kleon first visited the Marquesas in the 1980s on an around-the-world sail that lasted 11 years.

The vessel Kleon recommends for a trip to the Marquesas is the new Aranui 5, a supply boat that doubles as a passenger ship. Classified as a small vessel, the custom-built Aranui 5 has 103 cabins and can hold up to 254 passengers. The 14-day cruise starts in Tahiti and takes you to three of French Polynesia’s five archipelagoes: the Society Islands, the Tuamotus, and the Marquesas.

I gotta say, the boat sounds cool. It has eight guest decks, an outdoor pool, a Sky Bar (panoramic views of little atolls streaming by), a massage room (yes please), and a gym (no thanks). The food, Kleon assures me, is “excellent.” There are 21 Premium staterooms with private balconies and seven other categories of cabins. At the budget end of the spectrum is a dormitory-style cabin that sleeps eight.

The Aranui is registered in France but Polynesian-owned, and the entire crew is either Tahitian or Marquesan (the Tahitians tend to work on the passenger side while the Marquesans handle the freight). “The other ships in French Polynesia all have non-local crews,” says Kleon, “so it’s unique that way.” My fellow travelers will likely include French, Germans, Italians, Aussies and Kiwis. The cruise is a good option not just for a retired French safari guide and his American wife who isn’t a hunter and doesn’t speak French but also for families with kids and almost anyone, in fact, who has at least 16 days to spare and wants to get beyond the resorts. “It’s a cruise for someone who wants to experience another culture and be active,” Kleon says. “My focus is to give people the deepest experience they’re willing to have.”

The Aranui is the only ship visiting some of these islands, many of which have no airport, and its arrival is an event. Schools close. Men, women, and children line the shore. Passengers wave from the ship’s balconies. Refrigerators, trucks, and livestock roll off the ship. The freighter crew performs feats of strength. Bundles of fresh fruit and tapa cloth fly through the air.

Sometimes there’s a gangplank, and sometimes the transfer from ship to shore is via small boat. “The guys who work the freighter part of the ship are the ones who take you ashore and bring you back,” says Kleon, “and these guys are huge. They literally lift everyone up and gently put them in the boats, and they take such overwhelming care of you, you feel like family. It’s a tremendously unique experience.”

There are no tour buses on the islands. The Marquesans drive you around in their personal cars and trucks, which they decorate for the occasion. Their children take you by the hand and guide you through the village, stopping at woodcarvers’ ateliers and tapa workshops, where women turn mulberry bark into cloth the traditional way, by soaking it and then beating it with sticks. You can also hike into the hills along forest trails that lead to rock needles, thousand-foot waterfalls, and ancient sacred sites marked by giant stone sculptures.

The Marquesas are known for their tattoo art (Kleon can arrange for me to get a tattoo if I really want) and, sure enough, their pig-hunting safaris. The hunters are armed with spears and there’s a ceremonial feast at the end. Between you and me, I would rather beat mulberry bark with a stick until it becomes cloth. That said, I’m willing to include a few wild pigs (Kleon calls them boars) in my tropical island fantasy if it will get my husband, who doesn’t do beach vacations, to agree to this trip. I’m hopeful that, at 71, he is more interested in seeing where the pigs live than in actually stalking one with a spear.

My notes of this conversation include the word “life-expanding” and the information that Kleon can also find us the perfect overwater bungalow on Bora Bora or guide us to the best spot in French Polynesia for kite surfing. He can even arrange a custom cruise aboard a private yacht, allowing us to go wherever we want and stay for as long as we want—information that will be carefully edited, along with the eight-bunk dormitory, from the briefing I give my husband.

Travel News and Trends From Our 2020 Global Travel Summit

Italy’s Reopening: What Travelers Can Expect