Hi. I’m Charlie. I’m 12 years old, and I’ve taken nine cruises on five different cruise lines. You might think cruise ships are pretty much the same, but they’re not. If you want your kids and yourself to enjoy a family cruise as much as possible, here’s my advice.

1. Get a cabin that’s on a higher deck toward the stern.

Everything that’s interesting for kids and families is always at the back of the ship. So get a cabin that’s very close to the aft staircase and no more than three or four decks below the pool, buffet, and kids’ club. If your room is at the front of the ship, you’ll spend most of the day walking back and forth across the ship, and if your room is on a low deck, you’ll have to wait for the elevator. 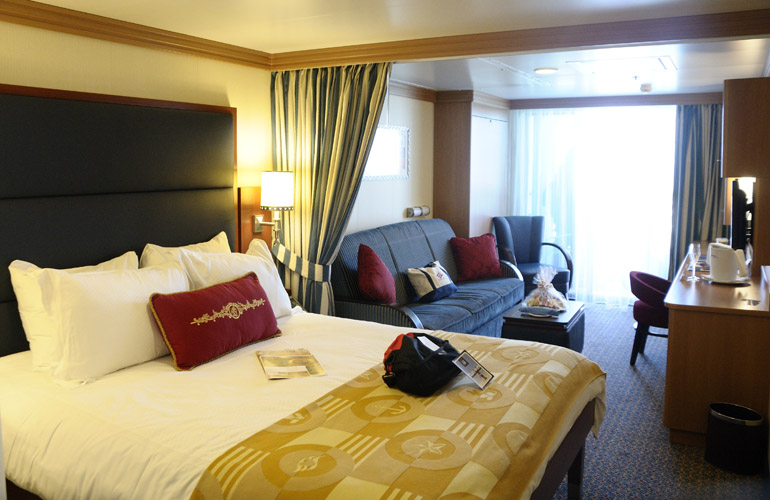 This was a good cabin because it had a sofa bed.

2. Get a sofa bed rather than high-up beds that fold out of the wall.

A sofa that turns into a double bed, even if you have to share it with your brother, is better than two single upper berths. It’s easy to fall out of an upper berth, especially kids like my brother Doug who move around a lot when they’re sleeping. 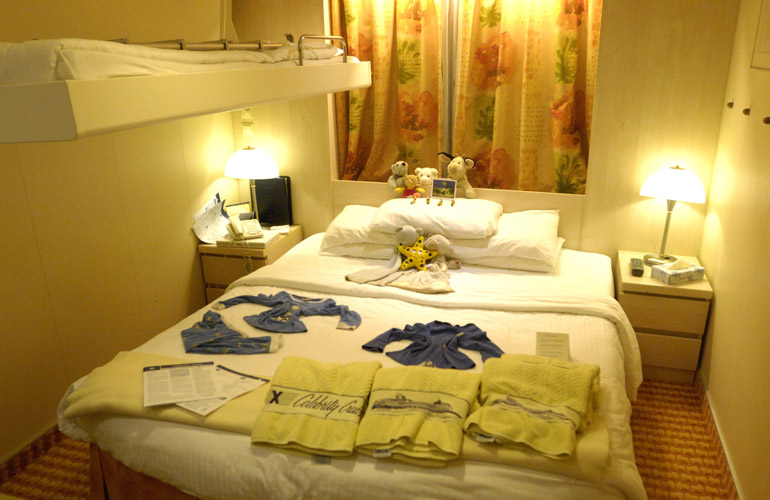 Dad ended up sleeping in this upper berth.

3. Always get a balcony.

Without a balcony, rooms are crowded with four people in them. And you need a balcony so you can always see the sunrise and sunset and have nice light in your cabin, and so you can go out and get fresh air and enjoy the smell, and so you can see the place you’re visiting when you come into port. 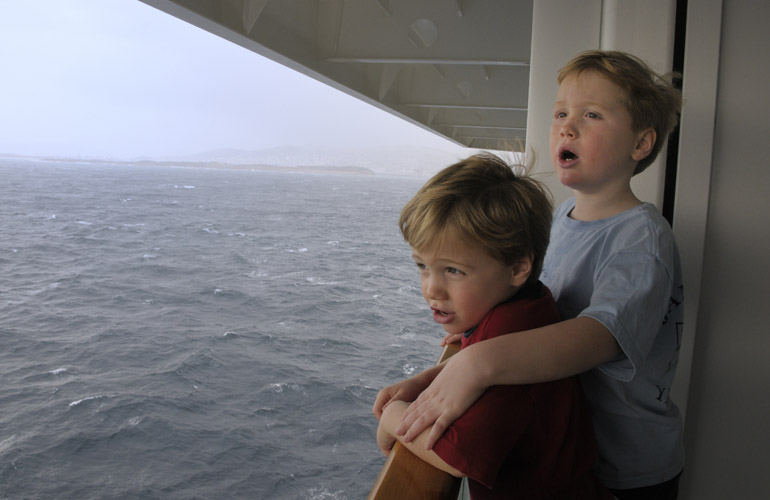 Everyone who doesn’t have a balcony always wishes they had one.

4. Get a large pool with a water slide.

Some cruise ship pools are salty, so bring swim goggles.  If the pool has a water slide, check the height limit because your kid might be disappointed if he’s too short. 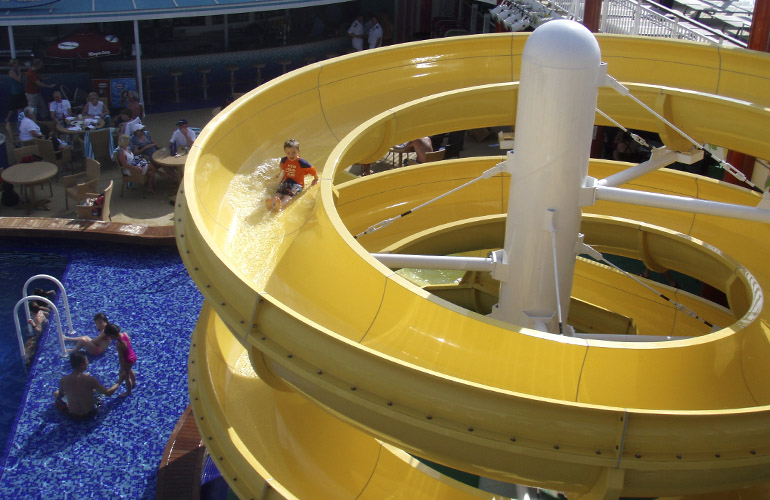 We waited till Doug was tall enough for the water slide before we went on the Norwegian Gem.

5. Do not sign up for the early dinner seating.

A lot of parents make this mistake. The early seating means your kids will have to leave the pool at 5:00 so you can get to dinner by 5:30, and your kids will be stuck eating in the restaurant, which is boring and takes forever. Every kid would rather eat in the buffet because they can get food they know they like. (A possible exception to the rule is Disney ships because the restaurants are awesome.) Always sign up for the late seating because you can take your kids to the buffet at 6:30 and take them back to the kids’ club at 7:00, and then eat on your own at the late seating. 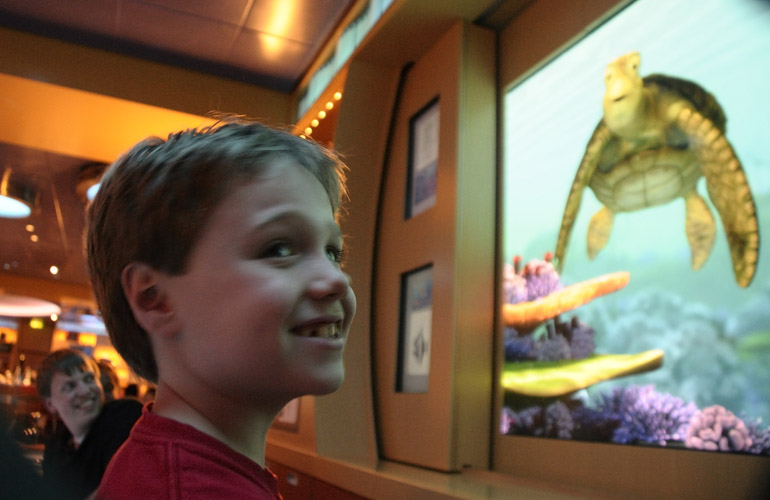 Doug in Animator’s Palate, which is the best restaurant on Disney ships because Nemo characters come to life and talk to you.

6. Make sure there’s food by the pool.

Sometimes you don’t even need to go to the buffet for dinner because you can get food by the pool at dinnertime. On Holland America we could eat hot dogs, hamburgers, and ice cream for dinner by the pool. But Disney was great because they had themed food stands with different types of food, like Flo’s V8 Cafe or Pinocchio’s Pizzeria, where we could eat in a beach chair in our swimsuits.

Some kids’ clubs close for two hours at lunchtime and dinnertime, even though your children don’t need two hours to eat lunch or dinner. 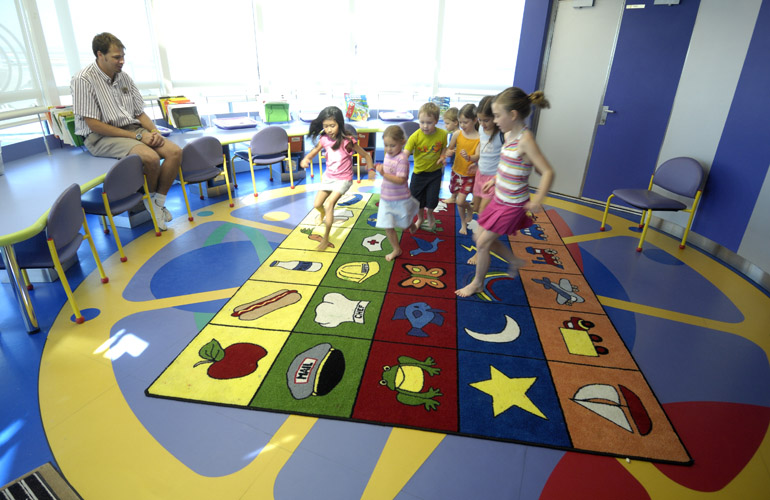 My first kids’ club on my first cruise, which was on Celebrity Cruises.

A kids’ club is always better when your kid can check himself in and out of the club. This makes life easier for both of you:  Your child doesn’t have to be stuck doing something in the kids’ club that he doesn’t want to do or missing something he’d rather be doing somewhere else on the ship, and you don’t have to interrupt what you’re doing to pick him up at a certain time. 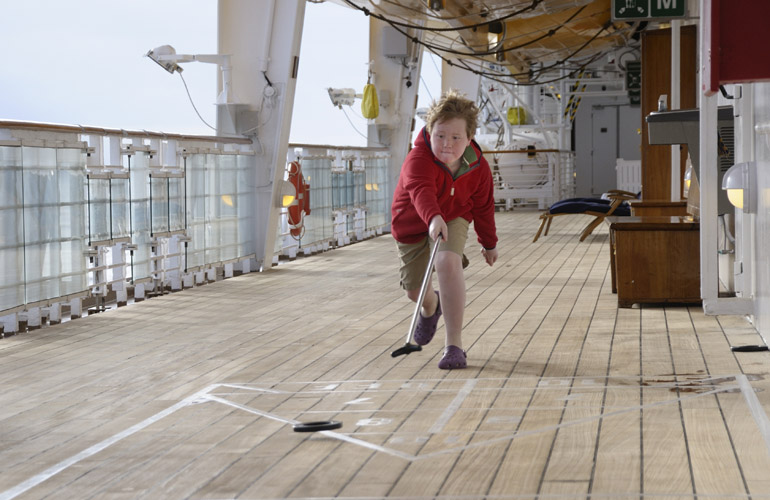 If you can check yourself out of the kids’ club, you can always go play shuffleboard.

Also, get a kids’ club where your kid isn’t the oldest in his age group.  If your child is in the 6-to-8 group and he’s turning 9 soon, he might be bored with the little kids.

8. Choose a ship that has scheduled activities for parents and kids to do together.

On Norwegian Cruise Line there’s at least one family activity on the program every day that parents and kids do together—like a scavenger hunt or “Family Challenge.” It was great because our family competed against my cruise-ship friends’ families. On Royal Caribbean there was only one family competition the entire cruise. There were things like 3-on-3 basketball tournaments and mini-golf contests, but for adults only, even though kids would enjoy those things much more than adults. 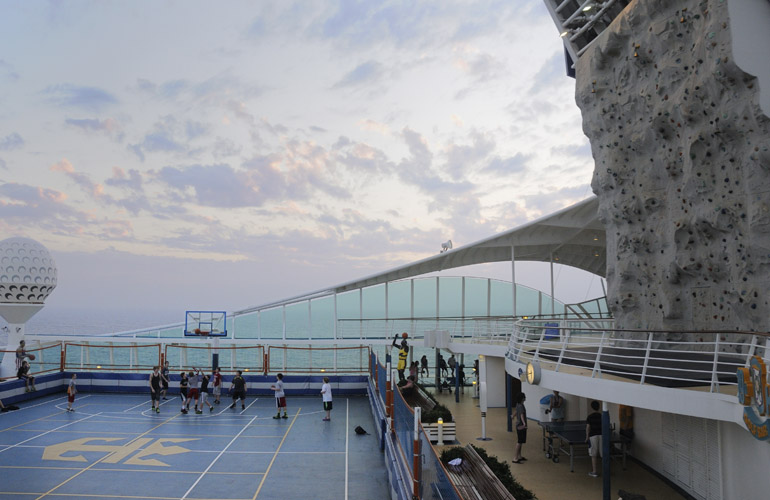 Royal Caribbean has the most elaborate sports deck.

9. Don’t worry about what sports are onboard.

If you want a giant sports deck, choose Royal Caribbean, but you don’t really need one because every big ship has some good sports to choose from. They all have basketball, shuffleboard, and Ping-Pong, and most have mini golf. 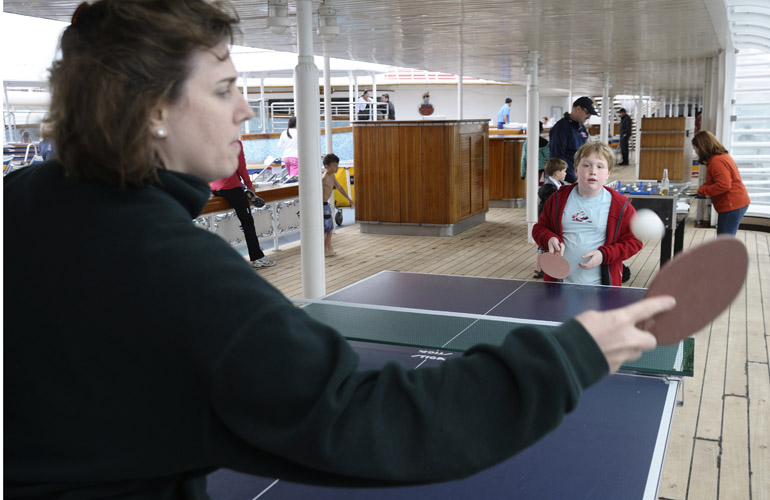 Schooling my mom in Ping-Pong on the Disney Wonder

Embarkation day sucks because the kids’ club isn’t open till nighttime, and there are no activities on the ship. Embarkation day is a good time to explore the ship with your kids and find all the places they’ll be at a lot, so your kids learn where they’ll want to go later and how to get there. Also, it can take a few hours for your suitcases to be delivered to your cabin, so make sure your kids pack their swimsuits in their carry-on luggage so they’ll have them for the pool. 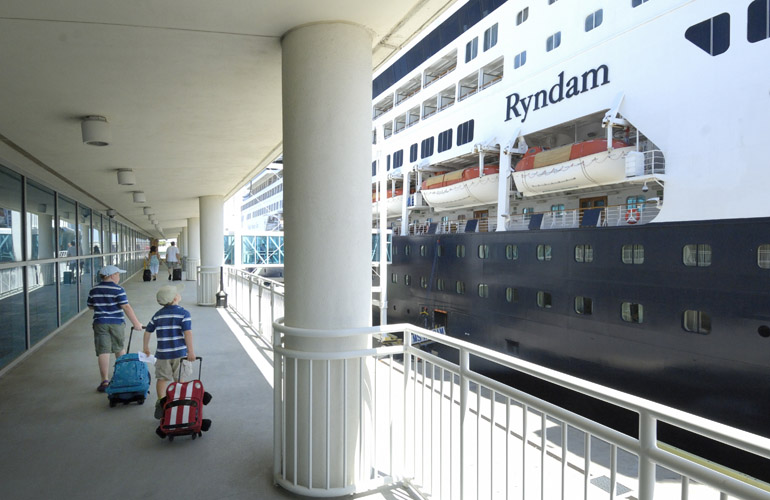 On embarkation day, have a swim suit in your carry-on.

11. Collect a souvenir from each port.

When you’re back home, whenever your kid sees each souvenir, he’ll remember the place where he got it. But don’t buy something like a teddy bear that says “Mexico” on in it. Instead buy something that was handcrafted by locals or is unique and you can find only in that place. For instance, in Honduras I got a metal fish made from an oil drum and an old ship’s hull. And in Belize I got a marble turtle that you wouldn’t find anywhere in America. 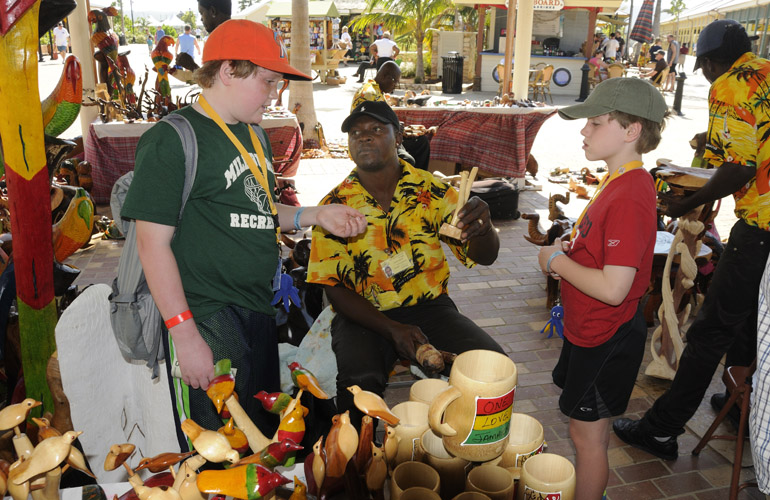 In Jamaica we watched this man carve my name into the wooden bird statue I bought from him.

If you’d like my advice about which cruise line is best for your family, you can ask me below.  Also here’s my advice for the Disney Wonder from my own travel blog.

Charlie Baker is Wendy’s 12-year-old son. He has traveled to 23 countries and has kept his own blog, NotAnotherTrip.com, since he was eight.