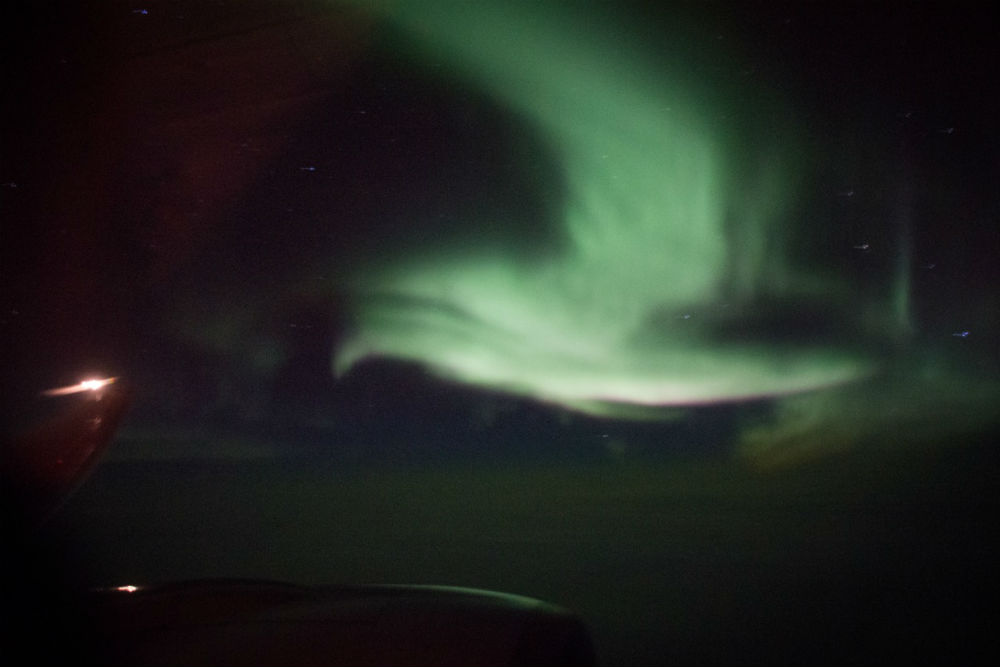 I can’t take pictures like this out the airplane window anymore, and I couldn’t have captured this—the aurora borealis over Siberia—with a cell phone. Photo: Tim Baker

Travel bans of any kind never come at a good time. But this latest one is coming at a particularly bad time for me. As a photojournalist, it’s my very job description to carry my cameras with me. Sure, iPhone cameras are fine for snapshots, but I make my living using professional-grade cameras that I am now forced to place in checked luggage if I’m flying to the U.S. or U.K. from certain airports. So this ban is going to hurt. I have an assignment in Morocco next week and another in Dubai this summer, and I’ll be flying through and from airports that are on the new watch list.

I always arrive at the security gate well before scheduled departure so that my gear can be scrutinized. In fact, I fly with so much gear, electronics, and cords that I get very suspicious if the security agency doesn’t check my bag with a fine-tooth comb. But this ban will seriously change how I work.

My biggest complaint with the ban is the vagaries of it. Okay, I understand laptops won’t be allowed, or iPads, or my kids’ DS. But what about battery chargers or the cell-phone-sized hard drives I use to back up all the photos I shoot on assignment? What are you supposed to do with a key piece of equipment you thought was okay to carry onboard when a security guard says you can’t take that onboard because…well…he says so. Your checked bags are already down the chute. Now what?

My other concern is theft. You might as well put a “Steal Me” sticker on the outside of a bag with your camera in it. Security staff and luggage handlers X-ray bags well out of sight from the public, so the theft rate could increase exponentially. I remember going through Heathrow years ago when a similar ban was in effect. I had placed my underwater video camera in a checked bag (because my carry-on was already maxed out with other— more important—equipment), and they brought it to the gate where I was waiting, and I had to show the security agents what it was and prove that it was operational. That was the last time I saw it. Those little TSA-approved travel locks? Sure. Why not? But they and your ballistic-material luggage can be breached in mere seconds. Or just stolen completely, little locks and all.

So what am I going to do about it?

I live in fear of a camera getting lost or stolen on a trip, but now I will be changing how I work.

•For starters, I will leave my top-of-the-line camera bodies (the part of the camera minus the lens) at home. Instead, I will use cameras that are a few years or models old. Though not the latest and greatest, they are still usable and more expendable than my best—which I will need back at home.

•I will never put more than one camera body into each piece of checked luggage. That will give me a better chance of arriving at my destination with at least one of them.

•I will carry more media cards on which to store the photos I shoot. Let me explain: Until now I’ve always carried my laptop on my trips, downloaded each day’s photos to it each night, and backed them up on a portable hard drive (if not two). This is so as not to lose the images I’ve shot during the trip. The system allowed me to reuse media cards once I’d transferred the images to my laptop. Since I’ll now be leaving the laptop at home (since I won’t entrust my laptop to checked baggage), I’ll buy more media cards on which to store my photos. I’ll simply save the photos on the cards and wait till I’m home to download them to my laptop. SD cards are actually cheap enough now to do this, but keep in mind that they are small, notoriously slippery, and easy to lose!

•On some trips I might bring an older laptop (from which I’ve erased my personal data) to use as storage and for transferring photos to a portable, cell-phone-size hard drive. Will I be allowed to carry the hard drive into airline cabins? I don’t know.

•I will probably invest in a product such as Western Digital’s My Passport Wireless Pro. You can plug your SD cards right into it (its USB slot handles other format card readers) and copy photos or data right to a 2 or 3 TB drive.

•If you place your cameras in checked baggage, make sure to remove the media cards from the cameras. My video camera was stolen at Heathrow, but at least I had the sense to take the tape out and hand-carry it.

You will also have to remove the batteries from your camera, as most cameras use lithium batteries. However, the FAA specifically says that lithium batteries can’t be in checked bags, so we’ll just have to wait and see how that catch-22 gets solved.

•So what about chargers? I’m going to have to carry extra spare batteries in addition to what I carry now, in case my battery chargers are banned from carry-on luggage and get stolen. I’ll get a second charger too—so I can put each into two separate checked bags, again hoping that both of my bags won’t be taken or violated.

•With the camera bodies in the belly of the plane, that will leave more room in my carry-on for lenses. But this worries me too. A security agent once probed his finger into my telephoto lens and not only made it unusable but did several hundred dollars’ worth of damage to it.

On a personal level, one of my favorite things to do is to take photos while I’m flying. That’s gone now. I will miss shooting sights from a 33,000+-foot vantage point.

I’ve lived with previous bans and increases in airport security since the days of D.B. Cooper and almost daily hijackings to Cuba. And I’ve dealt with higher-speed films being ruined by third-world x-ray machines. So this ban is nothing new. I just wish it weren’t so vague. I’m looking forward to hard-and-fast rules. 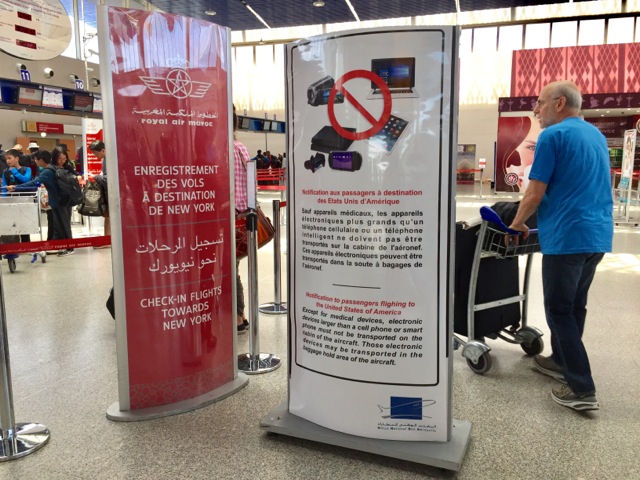 Answers, solutions, and work-arounds to the laptop travel ban, which affects countless fliers who rely on their tech devices in various ways. 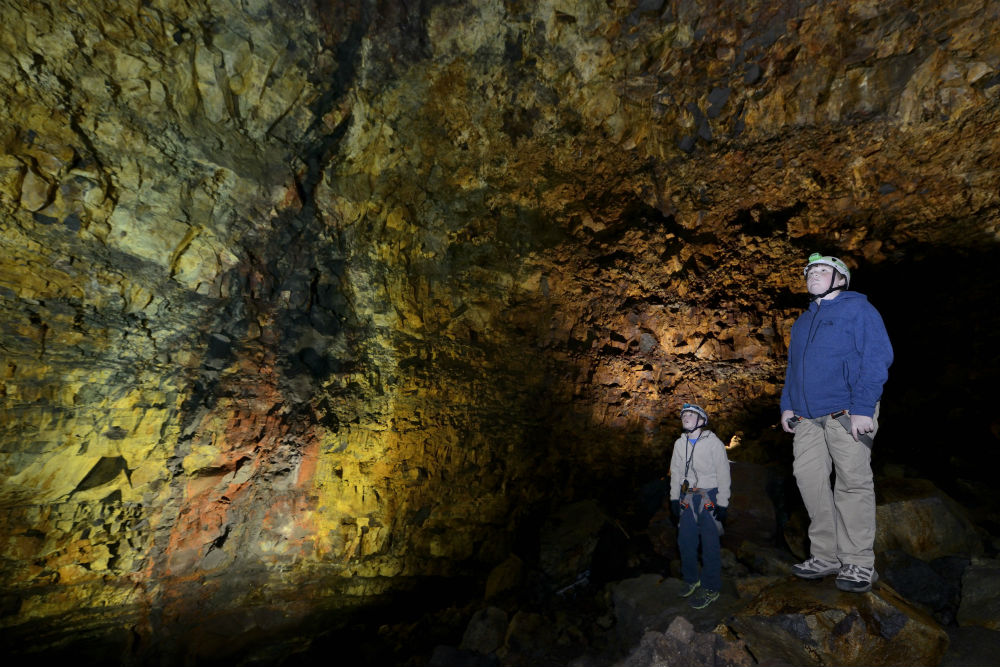 Like adventure? How about being lowered the equivalent of 40 floors—in a window washer’s scaffold—into a volcano in Iceland?

Airport and Airline Covid Testing: What You Need to Know

How I Choose Hotels for Road Trips During Covid