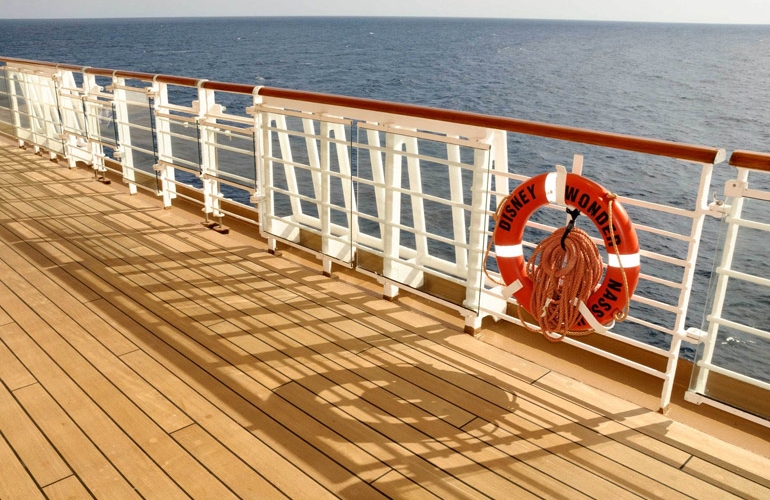 A rare moment of peace

I needed a vacation. A real one where I didn’t spend the entire trip checking email or racing around with a giant sightseeing to-do list.  I needed to relax. Clear my mind. Soothe my soul. Do nothing but stare at the sea and read novels for a week.

When your occupation is travel journalist, there’s really no such thing as vacation unless you stay home. So the fact that I managed to achieve my goal of relaxation surprises everyone who knows me. Even more surprising is where I achieved it: on a Disney cruise. Yes, I admit it: I chose a 2,700-passenger floating Romper Room plying a pedestrian itinerary from Los Angeles to Mexico as the setting for the restoration of my soul. And I chose it precisely because I had zero interest in any of the ports or anything Disney. This ensured nothing would tempt me from my cabin balcony. Nothing. I could hide from the world for a week with an endless expanse of ocean and sky and a stack of books by my side.

Our cabin for four

The view from my balcony

Key to the attainment of my goal was the fact that my travel companions were obsessed with everything Disney. This guaranteed me plenty of alone time on my balcony with no pangs of parental remorse: My kids (then seven and nine) would be kept occupied by the supervised children’s programs all day long. Disney counselors would even feed them lunch and dinner in the kids’ club. I wouldn’t even have to leave my balcony for my own meals; I could order room service. The only thing that might pry me from my veranda? The opportunity for moonlit deck strolls with my husband. We could have seven “date nights” if we wanted—one for every night of the cruise. All for $3,335 for my family of four (including the aforementioned room service and supervised kids’ club).

For the first few days of the cruise, all went according to plan. I sank into my deck chair, allowing the vast emptiness of the landscape to seep into the thicket of my mind and start clearing a path toward that hard-to-reach place called Relaxation. It helps that the ocean as viewed from a moving ship tends to mesmerize. The sea stretching to the horizon line is always the same yet always changing: You never know where the next white cap, leaping dolphin, or passing ship is going to pop up. The continual forward movement through the water aids the flow and fruitfulness of my internal reflections. Whatever work-related anxieties I’ve brought with me on vacation, the sheer overpowering force of the ocean makes them seem small by comparison. Yes, the ocean tends to push my worries away. Okay, the ocean and the kids’ club.

I managed to read four books on my balcony and achieve more serenity than I had in years. But then on Day 5 something happened that I hadn’t planned on: My kids, jazzed from all the excitement whipped up by the giant floating Disney infomercial outside our cabin door, wanted to share their favorite finds with me. How could I say no? And that’s how I was suddenly yanked off my balcony and sucked into the shipboard vortex of at least one hundred daily activities—from Ratatouille Cooking School to Glitter Mania to Marshmallow Olympics—that, to my mind, negated the entire purpose of being on the ocean but, for my kids, constituted Nirvana. I was dragged to a “character breakfast” where we posed for photos with Mickey, Minnie, et al. I was pulled into Goofy’s Pool for outdoor movies like Swiss Family Robinson shown on a jumbotron the size of our house. Pretty soon I found myself succumbing to the Disney spell in spite of myself. Once I’d seen one of the technologically astonishing stage shows—namely, “The Golden Mickeys,” perhaps best described as an Oscars ceremony for six-year-olds—it became impossible to skip the rest. By the end of the cruise, I was cheering on my older son in the “Who Wants To Be A Mouseketeer?” game show and scouring the ship on a mission to snag Daisy Duck’s autograph for my youngest.

Kids get to play shuffleboard.

Kids get to be in performances.

Kids get to be in game shows.

The “Pirates in the Caribbean Night” was a deafening pool-deck dance party.

Pandemonium in the atrium

It was like New Year’s Eve in Times Square—for six-year-olds.

The insanity culminated in “Pirates in the Caribbean Night,” a deafening pool-deck dance party—this time it was New Year’s Eve in Times Square for six-year-olds—where the emcee whipped the crowd into a frenzy with shouts of “Make some noise!” and “Let’s go crazy!” The multitude attempted to boogie with giant chipmunks Chip and Dale while Mickey zip-lined from one smokestack to another to rescue the ship from the clutches of Captain Hook. A colossal fireworks display (leave it to Disney to land permission to launch fireworks from a ship) was then followed by a buffet featuring 27 different types of dessert. At 10:30 pm. For a thousand kids under age 12. Insanity.

Any time I needed to escape the vortex, though, all I had to do was return to my cabin balcony for instant serenity and solitude. In the end, my vacation was more high-energy than I had planned but, given my need to balance the conflicting desires of a family of four, it was about as therapeutic as I could have hoped for. I might just do it again.

Other cruise ships that I have road-tested with my family include:

Royal Caribbean’s Navigator of the Seas