Overseas Credit Card Purchases: Which Currency Should I Pay With?

Keeping track of currency exchange rates is a necessity when traveling. Thankfully, there are many apps for that task, so we don’t have to spend too much of our time doing the research (I like Easy Currency Converter; leave your favorite in the comments below). But while it’s helpful to know the rough exchange for your home currency, the actual conversion rate varies from bank to bank, credit card to credit card, and even local merchant to local merchant.

As a result, when you’re overseas and you use a credit card, you’ll often see that the payment machine asks whether you want to pay with U.S. dollars or the local currency. Which one should you choose, and why? 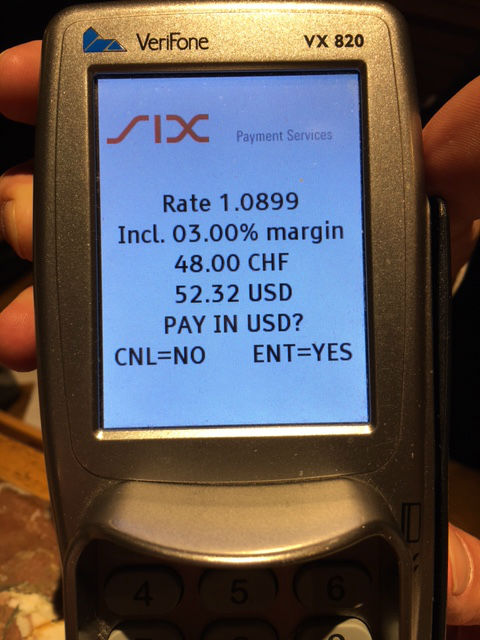 First: Use the right credit card.

Having a credit card that’s ideal for travelers is your first line of defense against currency pitfalls: The good ones waive all foreign-purchase fees. “When you make purchases abroad, you should be using a card that doesn’t add foreign transaction fees to your bill (which can be as much as 3%),” says credit card expert Gary Leff, of View From the Wing. “All cards are going to convert foreign currency to your home currency, and you’ll get the prevailing rate. Some cards, though, will charge you a fee on top of the conversion rate to do it.”

“When a merchant outside the U.S. asks whether you want to be charged in U.S. dollars or your local currency, always say local currency,” advises Gary. “That’s because [the merchant is] going to hit you with their own conversion rate (likely unfavorable, but certainly not as good as the one you will get from your card company). And then, if your credit card hits you with foreign transaction fees, they’re going to charge those fees anyway, even if you paid in U.S. dollars, because it’s a foreign-made transaction.”

“There is almost never any benefit to being charged by a merchant in your home currency,” Gary says. “You are best off having your credit-card-issuing bank do it at their rate. And you want to make sure you’re paying with a card that doesn’t charge you for the privilege of making purchases abroad.”

Inside the Mind of a Hotel Expert: Jetsetter’s Sean Murphy

Live Answers to Your Travel Questions: Join Us on Zoom for WOW Week 2022 May 2–6 at 6pm EDT

Is This the Best New Cruise Perk at Sea?