7 New York City Hotels That are Convenient and Affordable 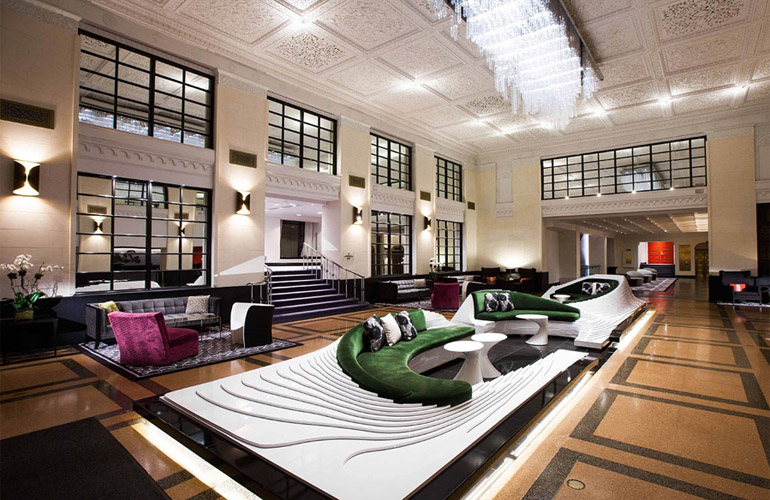 Lobby of The Affinia Manhattan

A friend and his wife are going to New York City for their 25th anniversary. They want to see all the attractions, which will take them from the Statue of Liberty to the new Freedom Tower, and up to Central Park. What conveniently located Manhattan hotels do you recommend for someone with a budget of about $300 per night?

Jack, as someone who grew up in midtown Manhattan and still spends most days of the week there, zipping uptown and down on the subway, I do have a few picks for hotels that are well-located for sightseeing, convenient to public transportation, and budget-friendly (for NYC, that is).  Given the tourist crowds that are expected to hit Manhattan over the next few months—New York City is, after all, the #3 U.S. destination for TripAdvisor travelers this summer—these options should come in handy.

This new 230-room hotel is the first stateside outpost of the Amsterdam-based hotel chain, whose motto is “affordable luxury.”  The lobby, referred to as “the living room,” features oversized art and is filled with books and magazines. Efficiency is the theme, with self-service check-in and check-out, a 24-hour canteen, and rooms that make the most of their limited space with oversized beds and smart storage (218 West 50th Street, between 7th and 8th Avenues).

The 240-room Viceroy aims to bring a downtown vibe to its chic uptown location just a three-minute walk from Fifth Avenue’s most elegant shops and restaurants and the prettiest corner of Central Park.  The lobby has an Art Deco vibe; the restaurant and bar, Kingside, is a destination unto itself; the rooms are done in brown leathers, wood paneling, and brass accents. Doubles start at $305 if you prepay (120 West 57th St).

This trendy 260-room hotel a few blocks from Madison Square Park is a magnet for locals, thanks to its Stumptown-Coffee-serving lobby bar and Michelin-starred gastro pub, The John Dory Oyster Bar. In a building dating from 1904, the hotel has an eclectic aesthetic that combines the historic mosaic tile floor and stained glass ceilings with oddities such as a graffiti sticker mural wall in the lobby. Room sizes vary drastically, from Bunk Bed to Loft Suite  (20 W. 29th St., near Broadway).

Just five blocks from Lincoln Center, this Philippe Starck-designed hotel is still reasonably hip, even 14 years after it opened. Rooms are small; the focus is on the public spaces, such as the Sky Terrace rooftop bar, which is very popular in summer, and the Hudson Common, a beer hall and burger joint with nightly live music (365 W. 58th St., between 8th and 9th Avenues).

Near Pennsylvania Station: The Affinia Manhattan

This hotel is not in a pretty neighborhood, but it’s close to the transit hubs at Penn Station and Herald Square, yet still a few blocks removed from the noise and chaos of Times Square (and just a short walk to Macy’s and the Empire State Building). The hotel has an Old New York ambiance—with velvet couches and gold-plated elevators—and 618 modern, comfortable rooms (371 Seventh Ave. at 31st St).

It’s hardly a charmer, what with 1,306 rooms and a busy lobby, but it’s attached to Grand Central Terminal, making it one of the most convenient places to sleep in Manhattan. It’s got all the comforts of a large hotel: a 24-hour market downstairs, a fitness center, and just about any service you could need within easy reach (109 East 42nd St).

Near Soho shopping and galleries: The Nolitan

NoLita is a fun downtown neighborhood whose abbreviation stands for “North of Little Italy.” This hotel’s cozy lobby has a library, and its modern-industrial rooms have unfinished ceilings and wood-plank floors. Some even have floor-to-ceiling windows or balconies (30 Kenmare St.).

Things You Can Do to Help Others During the Coronavirus Outbreak