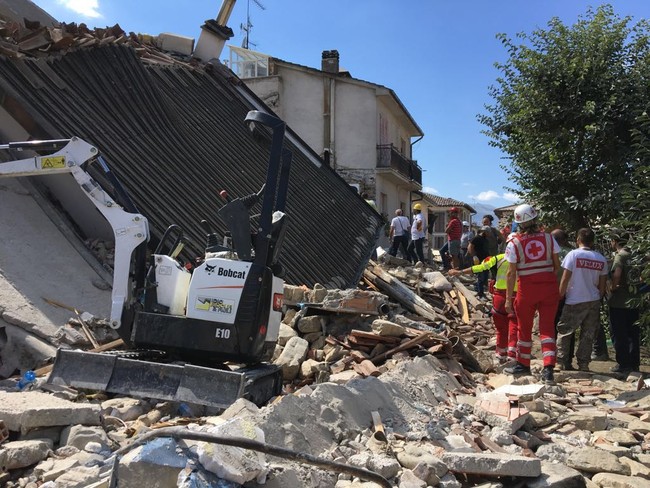 Update 10/30/16: Yet another earthquake has hit Italy today—the strongest in 36 years. The epicenter is near the town of Norcia, where the medieval basilica of St Benedict is among the historic buildings demolished by the disaster. Norcia is close the epicenter of the August 24 quake near Amatrice, which killed nearly 300 people. Thankfully, this one has only caused injuries, about 20, and no deaths.

Updated 10/27/16: A 6.2-magnitude earthquake hit central Italy on August 24, centered about 65 miles northeast of Rome, in the town of Amatrice. Sadly, nearly 300 people were killed, according to officials, and the mayor of Amatrice told CNN,“The town is no more.”

The Italian Red Cross has set up an information page for those who want to donate funds to the rescue effort. The organization is also asking those who are in the area to donate blood (if they’re eligible) and to unlock their personal Wi-Fi systems (ie., make it so that passwords are not required to log on) so that rescue workers and victims can freely use their Internet access to stay connected to each other and other emergency service workers.

For the longer relief effort, one of our own Trusted Travel Experts, Andrea Grisdale, has a few plans in action. In addition to promoting a donation appeal on her IC Bellagio website and raising funds through her nonprofit association Prolezzeno, she says: “We are working with the Lake Como town of Menaggio to organize fund-raising event on September 9.  We are also working with towns in central lake area of lake Como to get all our restaurants and trattorias to put Spaghetti Alla Amatriciana on their menus and for every plate sold they donate two euro to earthquake appeal.” She adds that all funds collected will be managed by Associazione Italiano Alpini (Gruppo Di Menaggio), “as they have earthquake support experience and they are local and this gives folks confidence that monies will reach the right destination.”

During the immediate aftermath of the quake, Facebook activated its Safety Check feature so that those in the area could alert friends and family that they were okay, and so that those at home could search for travelers and confirm their status. Google also has a Public Alerts page, where you can see a map of affected areas and track information on earthquakes, floods, and other emergency situations, sometimes with forecasts before they happen.

Sadly, the disaster in Italy was not the only one that day: Myanmar also suffered a 6.8 magnitude earthquake, which damaged at least 66 stupas in the ancient city of Bagan. The shake was felt as far away as Bangkok, Thailand; Calcutta, India, and Dhaka, Bangladesh. Only three people have been reported killed so far, including two children.

A smaller quake hit Indonesia on August 24 too, off the coast in the Flores sea. Luckily no one has been injured and a tsunami warning was not issued. That’s a relief for the country, which sustained a 6.5 magnitude quake in June that damaged buildings in western Sumatra.

Japan suffered a double quake this past spring: a 6.2 on April 14, followed by a 7.0 two days later. And in the western hemisphere that same week, Ecuador was rocked by a huge 7.8 earthquake on April 16 and then hit again in May; more than 1,300 people were killed in both, and tens of thousands were injured.

We’re not ticking off all these tragedies to scare anyone, nor are we suggesting that you stop traveling, or attempting to capitalize on such devastation. Rather, our goal (as always at WendyPerrin.com) is to keep you informed and to help you be as prepared for your travels as possible—and that includes being prepared for the unlikely event that you’ll be caught in an earthquake. To that end, we’re putting together a guide on how to be prepared for an emergency when you’re traveling overseas. Stay tuned.

This Is How You Get that Dream Cooking Vacation in Italy

The Countries That Are Open to U.S. Travelers and What You’ll Find There