How to Spend a Romantic Weekend in Paris: A Gentleman’s Guide 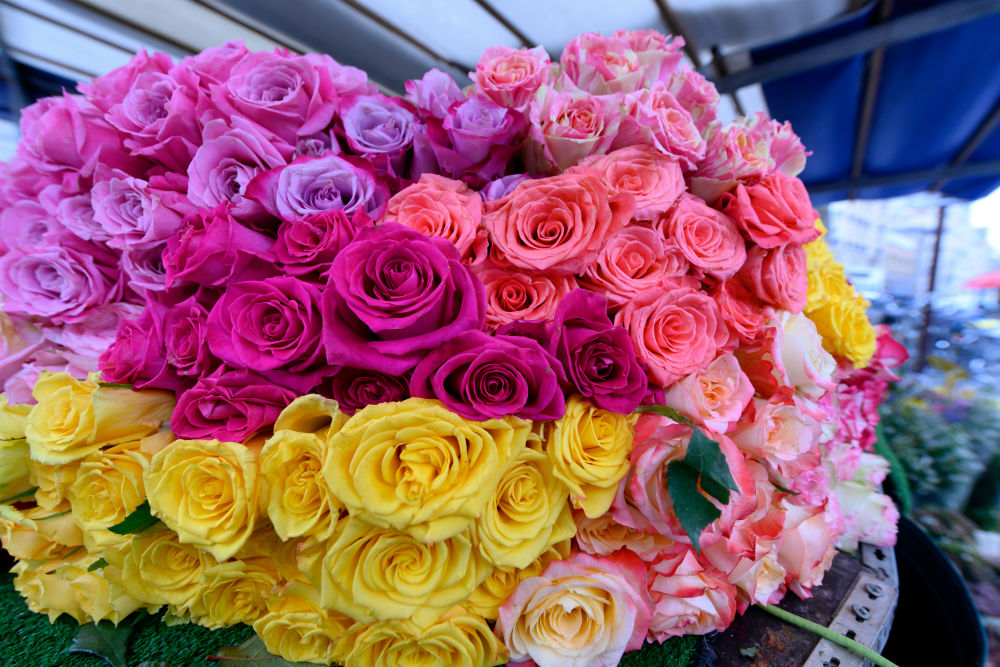 “If St. Francis de Sales, the patron saint of writers, were to whisper in your ear, ‘Take your wife to Paris for the weekend; she works hard and she deserves a break,’ where exactly would you take me and what exactly would we do?”

This is the purely hypothetical question that I asked my husband, a native Parisian, three days before Valentine’s Day. His response was to sit right down and, drawing on his extensive knowledge of Paris and women, craft the following itinerary. I share it here in the hope that it will bring comfort, joy, and a moonlight boat ride to another hardworking girl.

I have taken the liberty of filling in a few details not supplied by my husband, whose descriptions of romantic hotels, streets, and restaurants tend to begin and end with the phrase “It’s nice.” Sometimes he adds a finer detail or two, such as, “There are cobblestones” or “It goes back 500 years.” Where the descriptions are purely those of Patrick Texier—former teenage Romeo, now devoted husband—I have put them in quotation marks. Because he was a teenager in the 1960s, he specified that the car you hire for this itinerary should be a Citroën 2CV, aka a “deux chevaux,” the car Bridgitte Bardot drove in the 1961 romantic comedy Please, Not Now! directed by Roger Vadim. Patrick had one when he lived in Cameroon in the 1960s, and his eyes grow misty with nostalgia whenever he chances upon one rusting away in a patch of weeds. The car is seriously cute—a little like a Volkswagen Beetle, only French. Several companies supply them, with a driver or without.

After your night in the deluxe suite with the Barbie-doll eyes, followed by café au lait and a buttery croissant (my husband’s standard breakfast), you will head out into the morning light, arm in arm with your beloved, and stroll around Montmartre, stopping at the following places: 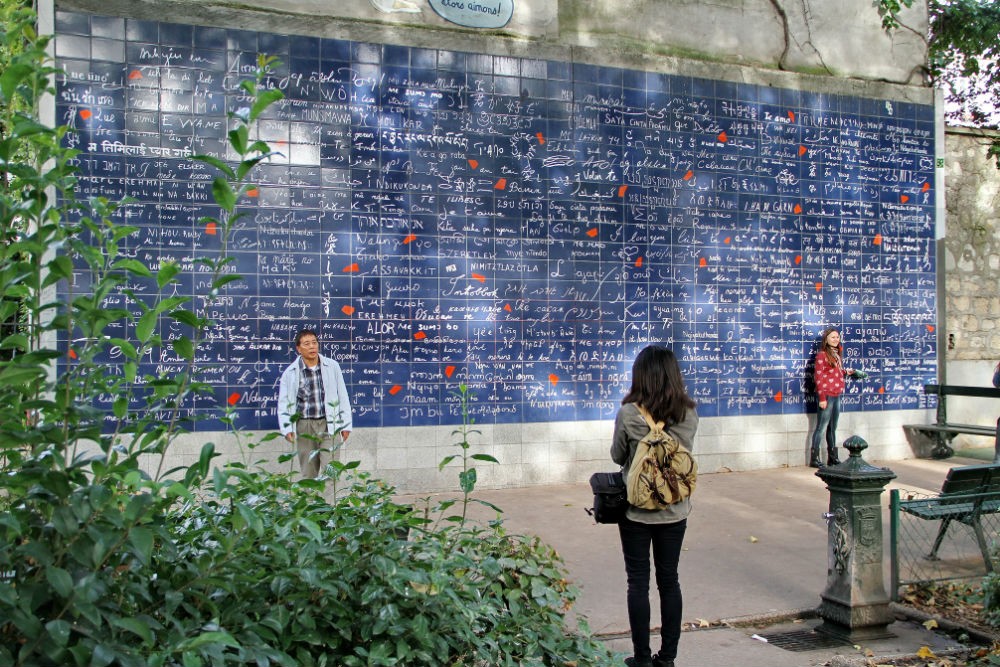 The “I Love You” wall mural in Montmartre, Paris. Photo: Peter Rowley/Flickr

Le mur des je t’aime, a mural composed of 612 tiles of enameled lava inscribed with declarations of love in 250 languages;

The Brancusi sculpture The Kiss, in Montmartre Cemetery, which marks the tomb of a young Russian anarchist driven to suicide by an unhappy love affair. (My husband visited her grave in 1964 with a girl named Irene, who lived below his parents’ flat in Port d’Italy);

Musée de la vie romantique, the 19th-century home of Dutch painter Ary Scheffer (his work was much admired by King Louis-Philippe), where the Friday-night salons, which went on for decades, were attended by neighbor George Sand and her lover Frédéric Chopin, as well as Delacroix, Liszt, Rossini, and later Charles Dickens and Ivan Turgenev. Today you can see the plaster casts of what the City of Paris, which runs the museum, describes as “the writer’s sensuous right arm and Chopin’s delicate left hand,” as well as other George Sand memorabilia (her jewelry, her family portraits, her rare and unique watercolors).

At this point, gentlemen, you may notice that the love of your life is wan from hunger and fatigue, so usher her into the 2CV and head for the center of Paris. Swing by Place Dauphine (“It’s nice. There are cobblestones”), pausing for a double selfie in front of No. 15, where Yves Montand and Simone Signoret used to live.

Have lunch at Le Caveau du Palais, “because the food is good and it isn’t touristy; a lot of lawyers are going there.” Romantic touches include plates of gravlax and magret de canard decorated with expressionist squiggles.

After lunch, stroll through the Square du Vert-Galant,  a little triangular park that juts into the Seine at the western tip of Île de la Cité. “It’s one of the best views of the Seine. You’ve got the river on your left, the river on your right, and the river right in front of you.” The park is named for Henri IV, a renowned vert-galant, which is to say a ladies’ man who is undaunted by a few gray hairs. 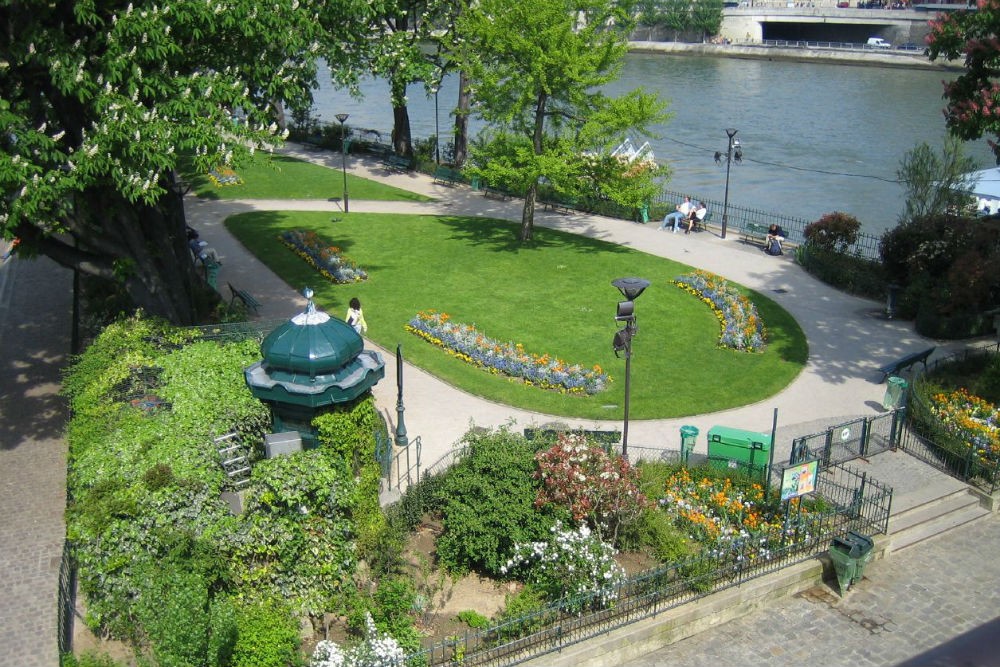 Next, guide your sweetheart around Isle Saint Louis, where “the small streets haven’t changed in 500 years.” When she begins to drag her heels across the cobblestones, return to the 2CV, which you have nimbly parked in a space that a Rolls-Royce would ignore, and head for the hills with the top down. Wind through Buttes Chaumont, “an old neighborhood, mainly Jewish, on a hill, with a very nice park and nice views of Paris”; Butte Bergeyre, a small village that “very few people know about; the houses are low because a lot of quarries are underneath”; and Rue Mouzaïa, “like a village street, with cobblestones and lots of plants” (by which, my husband says, he means trees, shrubs, and rosebushes). Stroll with your lover under the trees, pausing to pluck spring blossoms from her windblown hair. 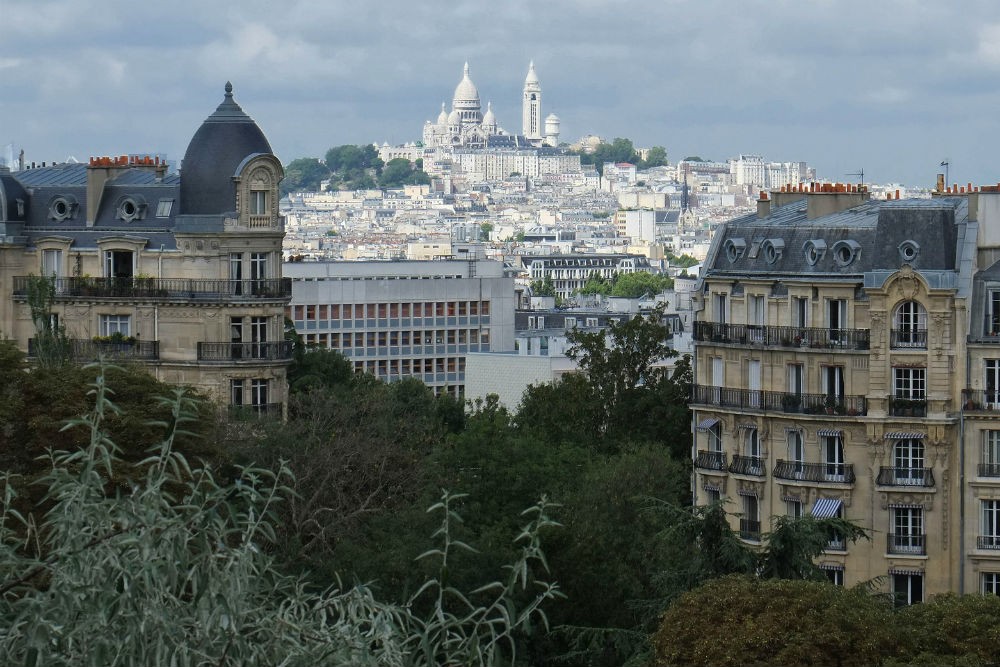 On your way to dinner, drop by Dilettantes, a champagne bar in Saint-Germain-des-Prés. If your date is famished, buy her a handful of macarons (Pierre Hermé; Arnaud Larher) or chocolate (Patrick Roger; Jacques Genin) and feed them to her one by one. Do not allow her to stuff them in her purse “for later.”

Dinner is either aboard a yacht on the Seine or in one of the private dining rooms at Lapérouse. My husband and I had a small argument about this. He claims the boat ride is the more romantic choice. The yacht, which is called the Don Juan II, is small enough to qualify as intimate; the cuisine is by Guy Krenzer, a Meilleur Ouvrier de France; and everyone gets a window seat. And of course, Paris at night, reflected in the river, is spectacular. All good arguments for the cruise. To which I countered that the private rooms at Lapérouse are also pretty darn spectacular, and more intimate, and that any restaurant that contains in its official 250-year-old history the phrases “hidden stairway,” and “criminal activity” deserves a closer look.

And that’s it. Sadly, I have not done most of these things, and I will not be doing any of them on Valentine’s Day. My husband, however, has done them all with one exception. He has never, to my knowledge, booked a room at Hôtel Particulier Montmartre, which only opened in 2007. 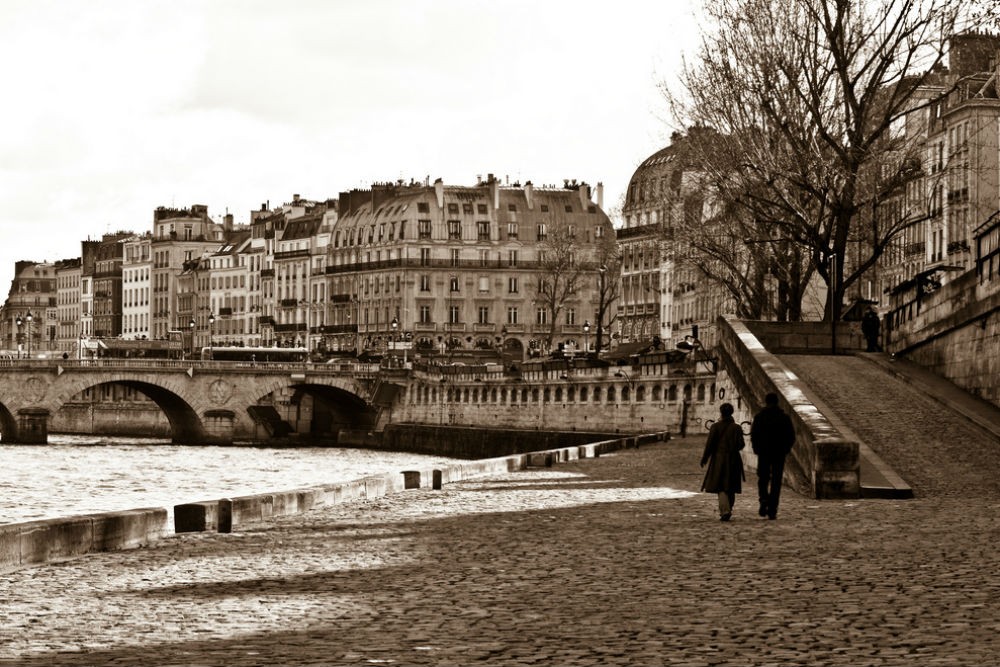 Postscript: While my husband was laboring over the above itinerary, I furtively posted a request on Facebook, where I have many Paris-loving friends, asking for their input. Joël Le Gall, an utterly charming Frenchman who leads tours of Paris, suggested Hotel des Grandes Ecoles, a “fabulous romantic hotel in Quartier Latin,” and seconded the choice of Musée de la vie romantique, pointing out that you can have a drink under an arbor on the terrace.

Jeff Tolbert, an American whose wife is French, recommended Hotel le Crillon, (presently closed for renovation) and a visit to the hammam at the Mosque de Paris or l’Escale Orientale.

Finally, both gentlemen, like my husband, recommended a tour of Paris by Citroën 2CV. The car features in Jeff’s memory of a day-trip to Giverny with Florence, and in the story of a Le Gall daughter’s engagement, which Joël described to me in a Facebook comment thus: “When my son-in-law decided to say to my daughter that he wanted to marry her, he rented a 2CV and drived into Paris in a very old frenchy fashion. How should she be in a situation to say no?” 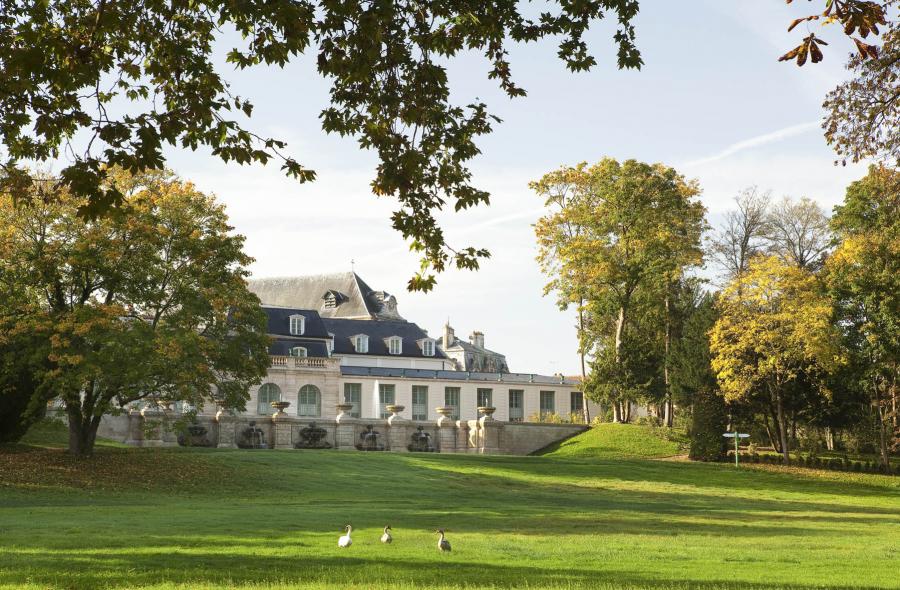 In this Ask Wendy column, Wendy shares some of the best hotels for a Paris Charles de Gaulle layover. 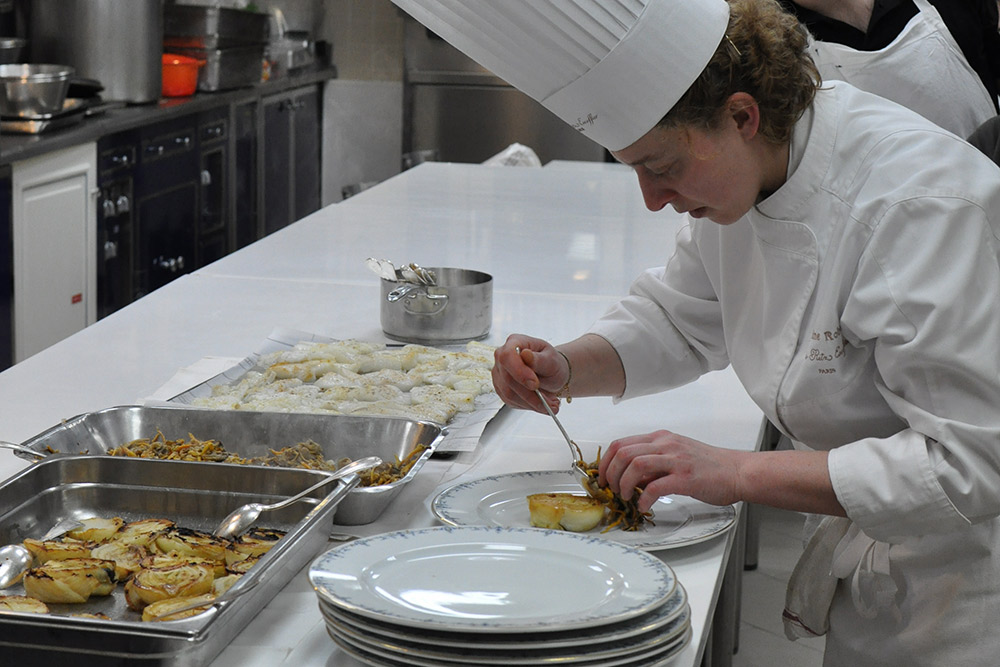 The Wonderful Thing the Pandemic Revealed About Madrid