It Hasn’t Even Opened Yet, but Baha Mar Is Already Transforming the Bahamas 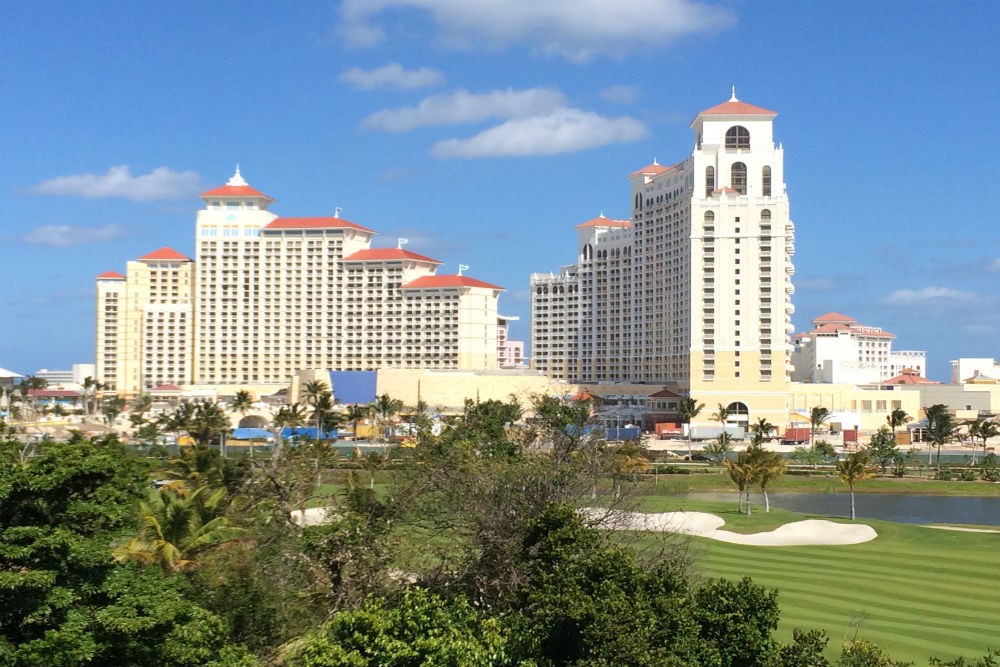 Baha Mar as viewed from the golf clubhouse

Americans seeking a quick escape to a sunny tropical island will soon have a new option at their fingertips: A long-awaited $3.5 billion luxury resort development called Baha Mar is opening March 27 in Nassau, in the Bahamas. Nassau is just a three-hour flight from J.F.K.—and the resorts, on Cable Beach, are just a five-minute drive from the airport—so it will be an easy getaway for many in the Northeast. As I’m one of the only journalists who’s seen Baha Mar—I just happened to be passing through Nassau yesterday and went to take a look—I figured I’d share what I learned.

Baha Mar will have four swank hotels— the Baha Mar Hotel & Casino, a Grand Hyatt, a Rosewood, and a SLS LUX—as well as a 30,000-square foot ESPA, a 200,000-square-foot conference center, and more than 40 restaurants, bars, and shops. There will be 3,000 feet of white-sand beach, a Beachfront Sanctuary filled with sea creatures, and a reef you can swim to and snorkel at.

The development has already transformed Nassau—to build it, they had to move the prime minister’s office and two banks and reroute a road—but that’s nothing compared to the transformation to come. Nassau recently spent $410 million renovating its airport and building a gleaming new terminal, as it plans to grow airline service to the Bahamas by 400,000 passengers within the next year. There are even plans for flights from China.

Big developments on small islands usually make me cringe, but my tour guide—Baha Mar’s director of public relations Paul Turnquest, who was born and raised in the Bahamas and ran The Tribune newspaper there for years, says the locals are happy about Baha Mar because it’s bringing 12,000 jobs and a ton of economic opportunity to the island. “If you’re someone who makes straw bags, your bags could be chosen for one of the hotel gift shops,” says Turnquest. “Imagine the impact that this property will have on the lives of the people here. For many, this is the opportunity for them to be on a world stage.”

Will travelers come? Will they like it? We’ll find out after March 27. Meanwhile, here’s a first glimpse. (I was not allowed to photograph the areas still under construction—which is pretty much everything except the golf course and golf clubhouse.)

Who can guess what I’m checking out in #Nassau #Bahamas today? Hint: It cost $3.5 billion to build, and it opens March 27. Here’s the view of it from Go Slow Bend (where they go way too fast).

It hasn’t even opened yet, but @BahaMarResorts is already transforming #Nassau and the #Bahamas. Comprised of 2,200 rooms across four hotels, it’s expected to draw so many travelers that they built a new terminal at the airport and a new road from the airport to Baha Mar. It’s only a 5-min drive from the airport! (And only a 3-hour flt from JFK.) A photo posted by Wendy Perrin (@wendyperrin) on Feb 19, 2015 at 12:04pm PST

Here’s a miniature model of the entrance to @BahaMarResorts. The building at left is the Grand Hyatt, the one at right is the Baha Mar Casino & Hotel, and in the middle is a lake with show fountains. Wait ’til you see the beach side. #Nassau #Bahamas

Here’s the model of @BahaMarResorts as viewed from the beach side. There will be 3,000 feet of white-sand beach and a Beachfront Sanctuary. You’ll be able to swim with sting rays, turtles, sharks, etc. They’re calling this stretch of Cable Beach, and the whole Baha Mar development, “The New Riviera.” #Nassau #Bahamas A photo posted by Wendy Perrin (@wendyperrin) on Feb 19, 2015 at 12:55pm PST

The SLS LUX at @BahaMarResorts will have Fly, the first rooftop bar in the #Bahamas. You can bet that’ll be a scene. Opening March 27.

Here’s the @BahaMarResorts hotel I’ll be most curious to see: the Rosewood. Baha Mar is an effort to rebrand the Bahamas, and if anyone can invent a new Riviera, Rosewood can. It’ll be the smallest of the four hotels (“small” meaning 113 guest rooms, 87 residences, 5 beach villas) and will share its driveway with the VIP entrance to the casino. #Nassau #Bahamas A photo posted by Wendy Perrin (@wendyperrin) on Feb 19, 2015 at 2:07pm PST

With @paulgturnquest at the @BahaMarResorts golf clubhouse. Paul, the former newspaper editor (and awesome tour guide) who is Baha Mar’s PR Director, says that by 2016 400,000 more travelers will be flying to the #Bahamas annually and Baha Mar will be responsible for 12.8% of the country’s GDP. The development is transforming #Nassau, and the locals are excited about soon being on a world stage. And that’s all, folks, from #TheBahamianRiviera.

Have you been to the Bahamas? What’s your favorite resort there?

French Islands So Pretty You’ll Be Tempted To Skip Provence

Barcelona Without the Crowds and Cruise Ships

What Lockdown Is Like in Other Countries: Life During Coronavirus