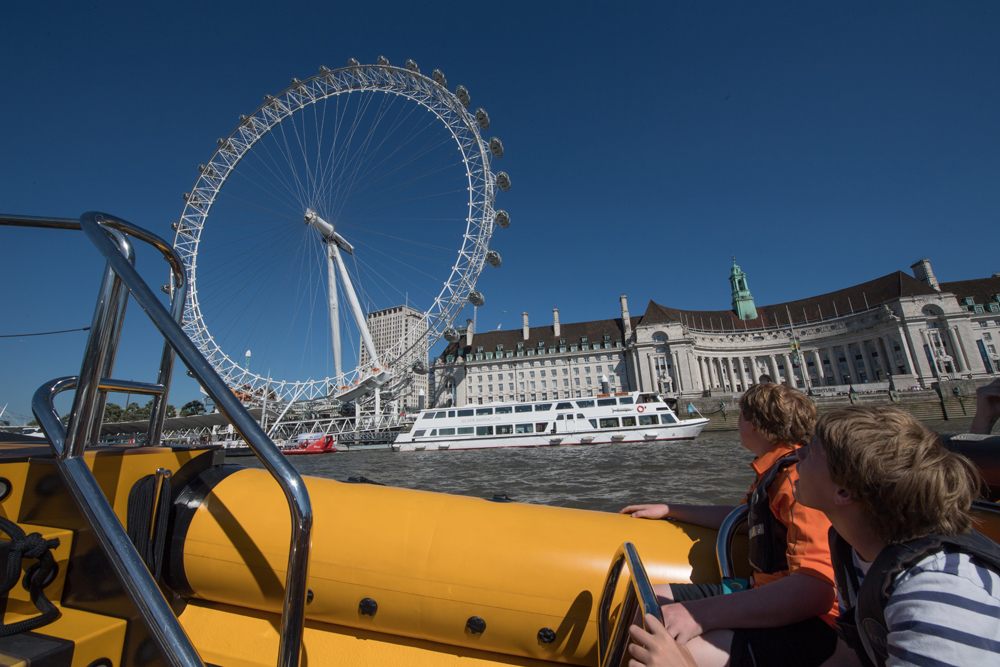 A rib ride on the Thames River is a fun way to see waterfront sights such as the London Eye.

Note from Wendy:  I’m just back from a trip to London with teen and tween boys, and out of 12 days’ worth of family-friendly activities—including a cricket match, the Science Museum, the H.M.S. Belfast, and Kensington Gardens—these are the experiences that my 14-year-old son, Charlie, enjoyed most, as well as those he feels are overrated.  Here, Charlie tells it in his words:

My mom took me to London over the summer and it ended up being an amazing experience. However, there were some times when I just wanted to leave whatever it was that we were doing. So, in this article, I will be sharing do’s and don’ts for London: where to go right away, and what to hold off on.

DO take a rib ride on the Thames.

This ride was both simply thrilling and thrillingly simple, as all it is is a high-speed boat ride. Your kids will love it, and you will probably love it too. It’s basically a tour of London, just much faster. With James Bond music playing, you feel like you’re in a movie. In addition, it isn’t too much of a bumpy ride, and I highly doubt that someone would feel sick after. I recommend getting there early so you can grab one of the front-row seats. 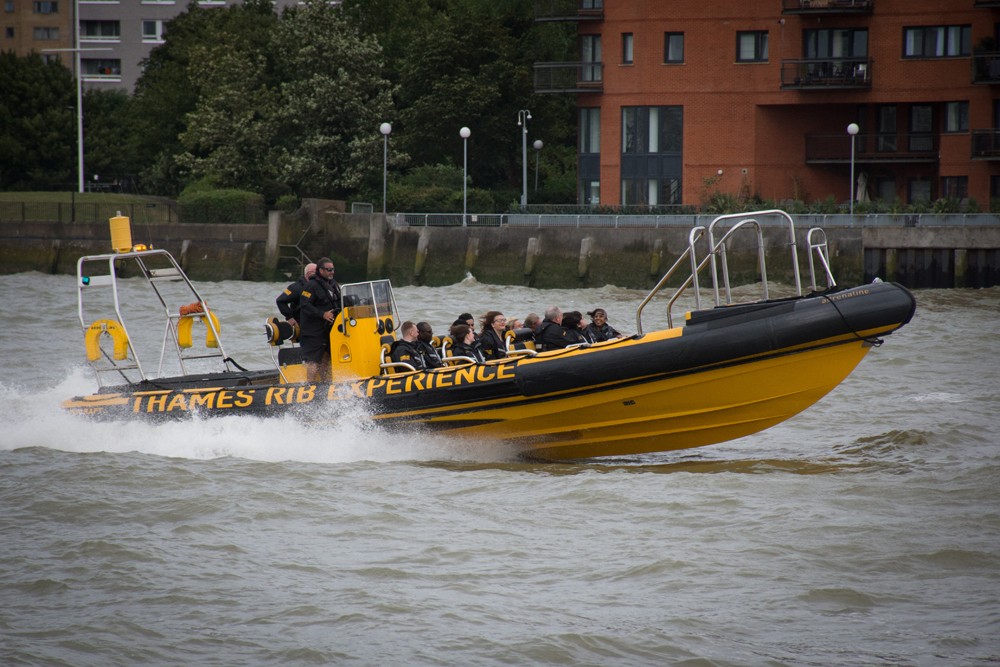 I recommend sitting in the front row on the London rib ride.

Everyone traveling to London has this on their agenda. But this really wouldn’t be too bad a thing to miss. The views aren’t as great as you’d think, and it’s sometimes hard to see because you’re packed in a cell with 25 others. There is also a very long line to get tickets; however, there is a big playground for the kids right next to it. You should still go here, but don’t overhype it or make it a priority to the other sights you’d like to see. If you have time, go for it. 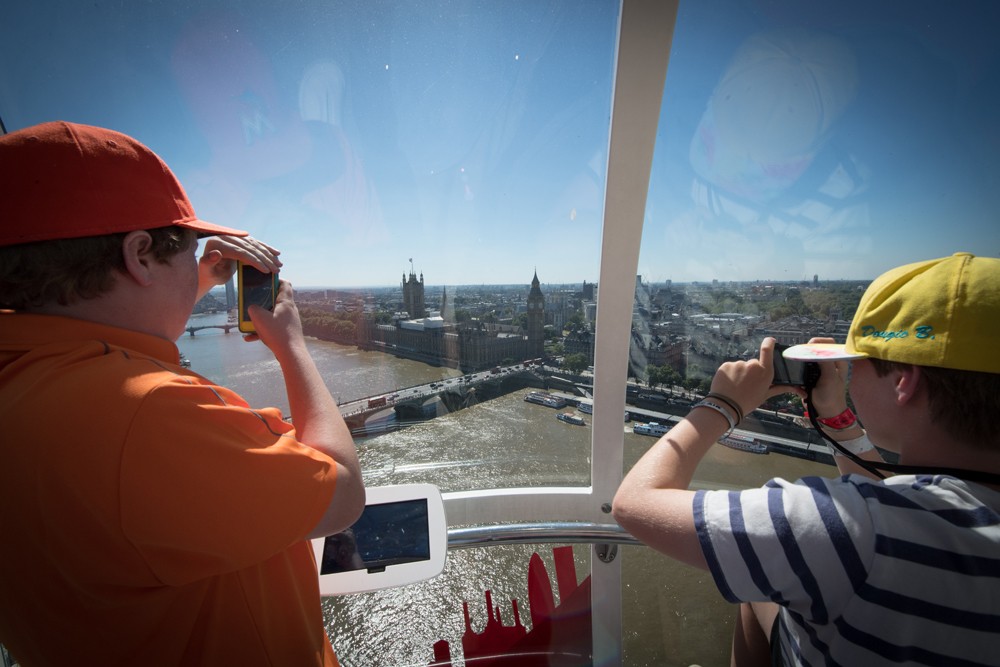 The views from the London Eye are good, but you get better views from other places in London.

DO pay a visit to the Churchill War Rooms.

This place surely exceeded my expectations. It is an exhibit about how Britain was run during the war and Winston Churchill’s life. They had a humongous interactive computer that had a timeline of world history during Churchill’s life. I spent a long time there. They only take groups of 5 or 7 at a time, so try to come when it first opens in the morning. 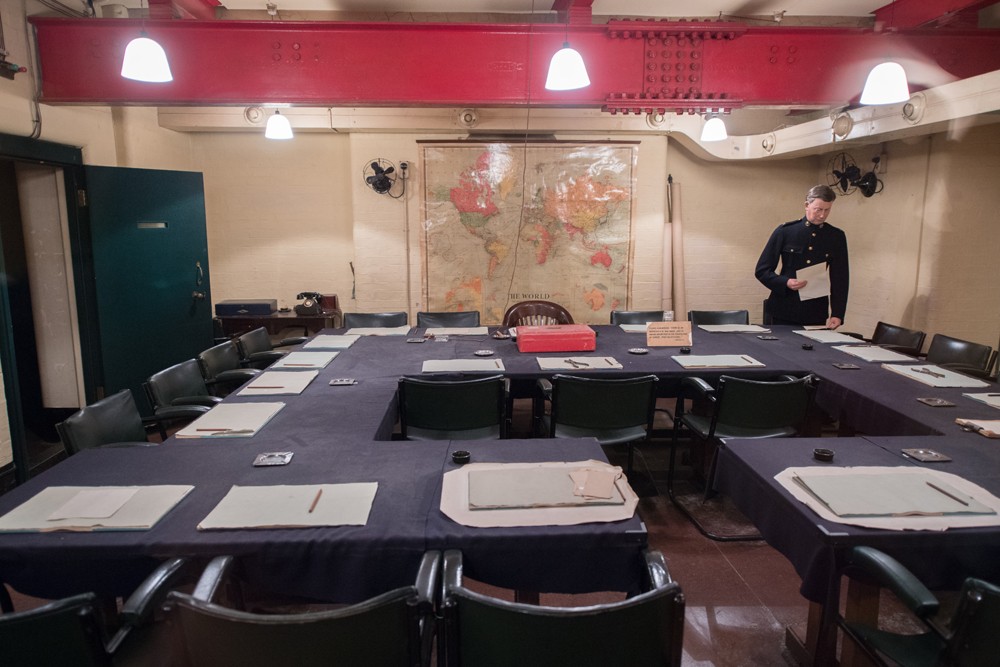 At the Churchill War Rooms you see the World War 2 bunker that shows how Britain was run during the war. 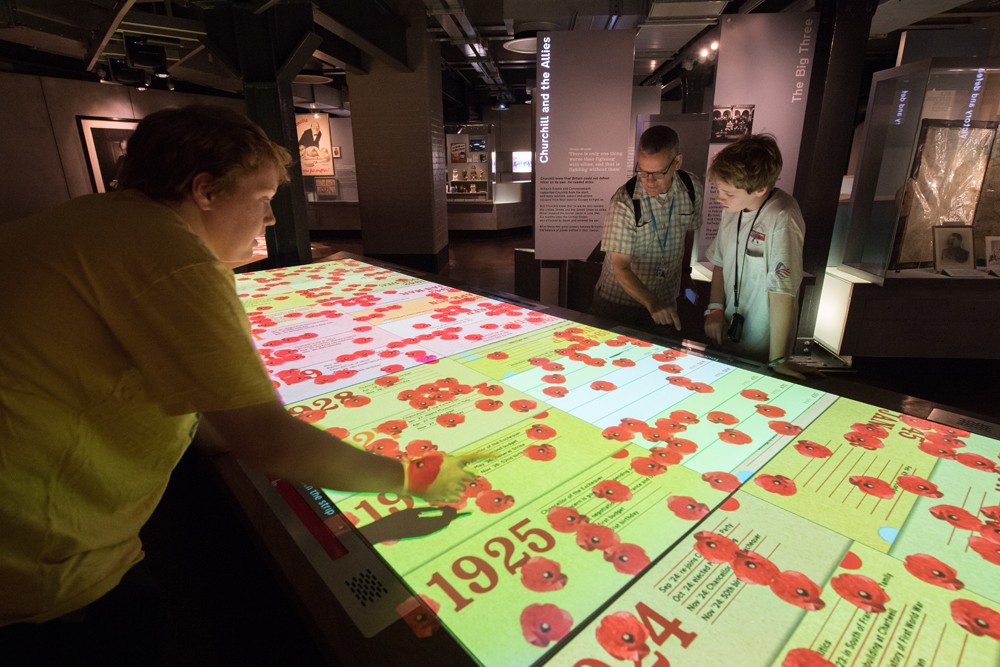 They have a humongous interactive computer that displays a visual timeline of world history during Churchill’s life.

DON’T randomly visit the inside of Tower Bridge.

You should only go to the exhibition inside Tower Bridge if the drawbridge is scheduled to go up. We got lucky and got there 15 minutes before the drawbridge lift. We watched the bridge draw from the glass bottom floors at the top, when it really might have been better to watch from the wings at bridge level. But I only did one, so I can’t tell you which is best. Besides that, there isn’t really too much to see inside the bridge. It’s a worthy destination, but only if you get to see it in action. 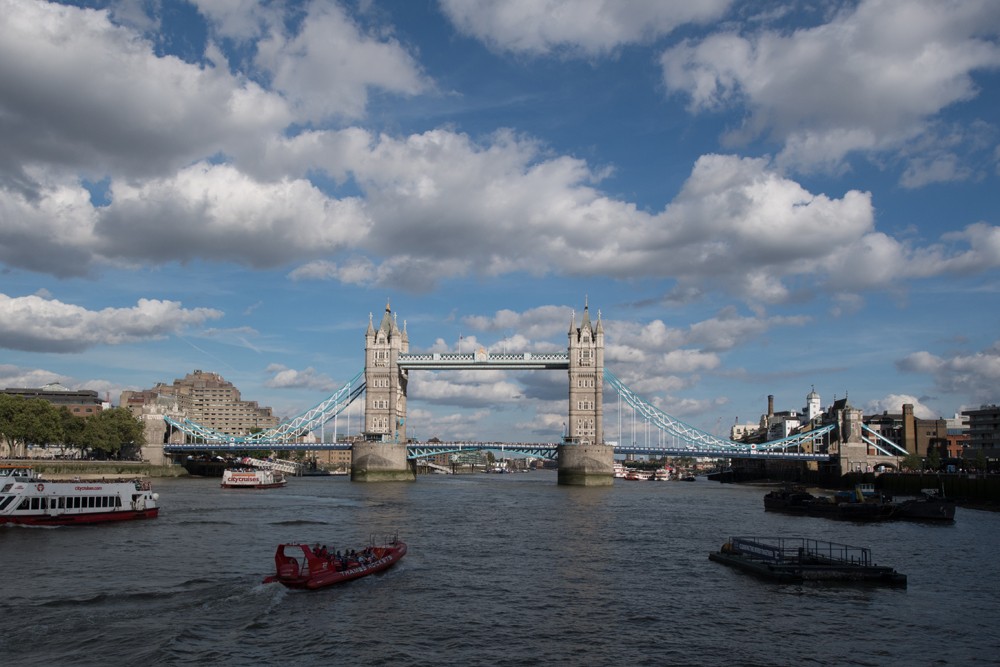 Tower Bridge as seen from the H.M.S. Belfast. 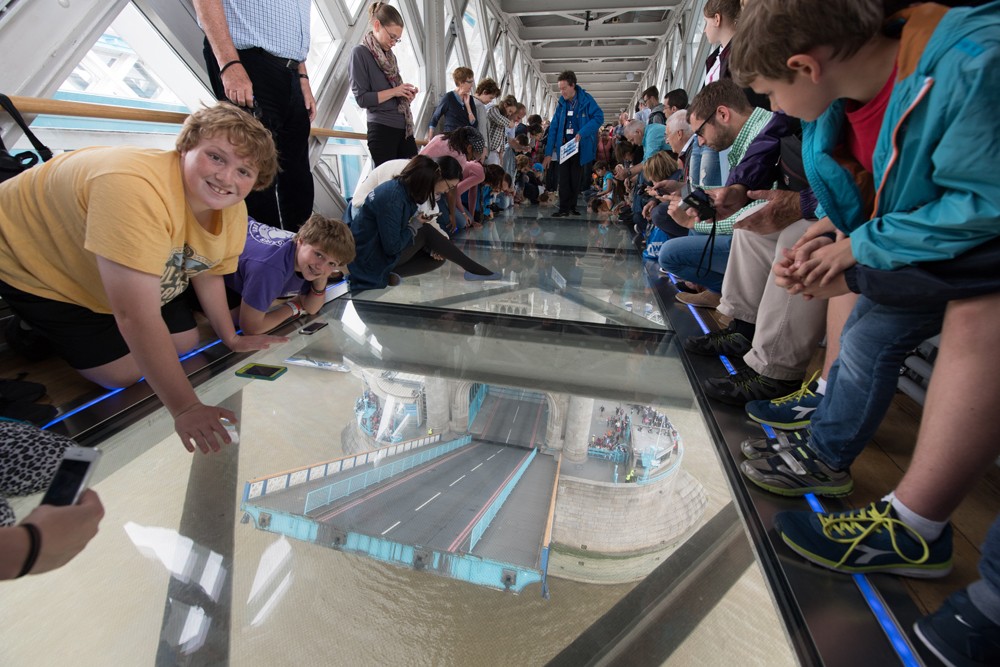 From one of the bridge’s glass-bottomed floors we watched the drawbridge lift.

The view from the top of St. Paul’s is phenomenal, undoubtedly better than that from the London Eye. But instead of a line to get there, there was a climb. And some climb it was. To get just to the second floor, there is what seems like a never-ending spiral to the top. But when you get to the fourth floor, you get the great payoff of going outside and feeling the breeze on your hair, the entire city of London in front of you. This is why I feel that St. Paul’s does the London Eye’s job better. There are even a lot of seniors making the climb for the top, which I thought was great. If you truly can’t make it, I would recommend just going up to the third floor, as the view isn’t that different and you aren’t forced to keep moving like you are at the top. 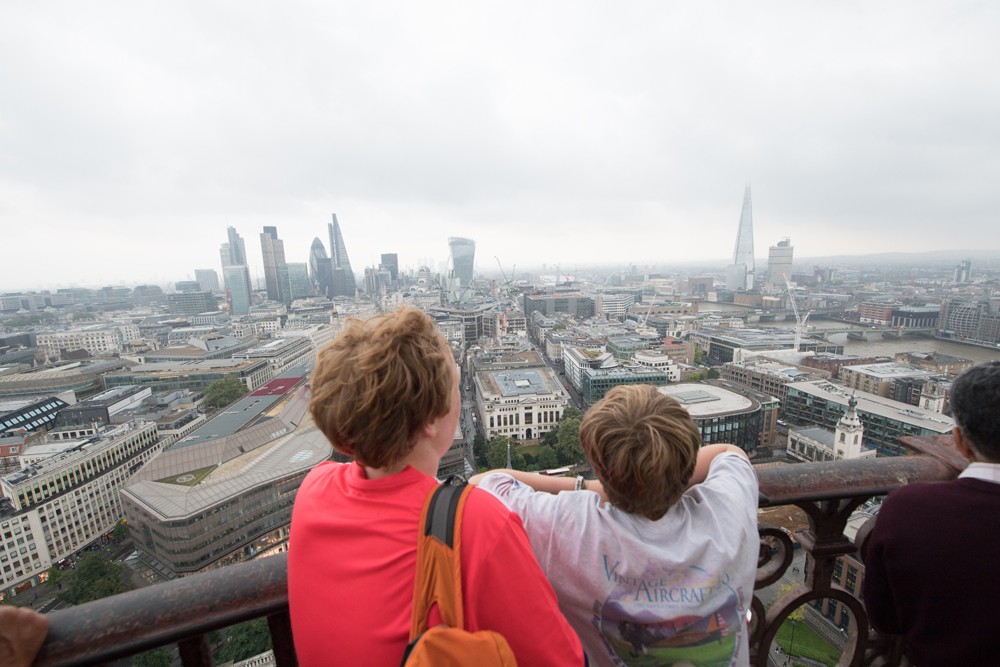 The view from the top of St. Paul’s Cathedral. 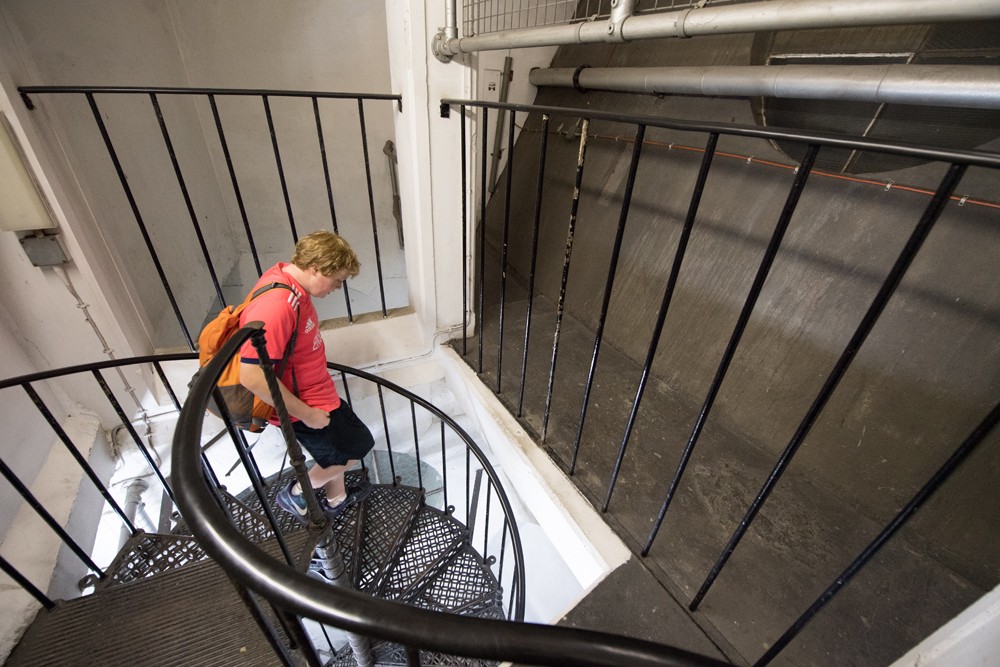 These are the stairs you climb to get to the top of the dome of St Paul’s Cathedral.

DO take some time at the British Museum.

The name is misleading because nothing in this museum is British. Kept here are all of the artifacts and spoils of war that the British have won, stolen, or recovered. You will find things in this museum from every country, including mainly ancient Rome, China, Greece, and Egypt, as well as Mesopotamia, Babylonia, and Assyria. You can also find things from the Americas, Japan, and Southeast Asia. Your kids would have very likely learned about some of this stuff in school, so they can tie what they’ve learned to what they’re seeing in person. No one will come out of this museum unsatisfied or unimpressed. 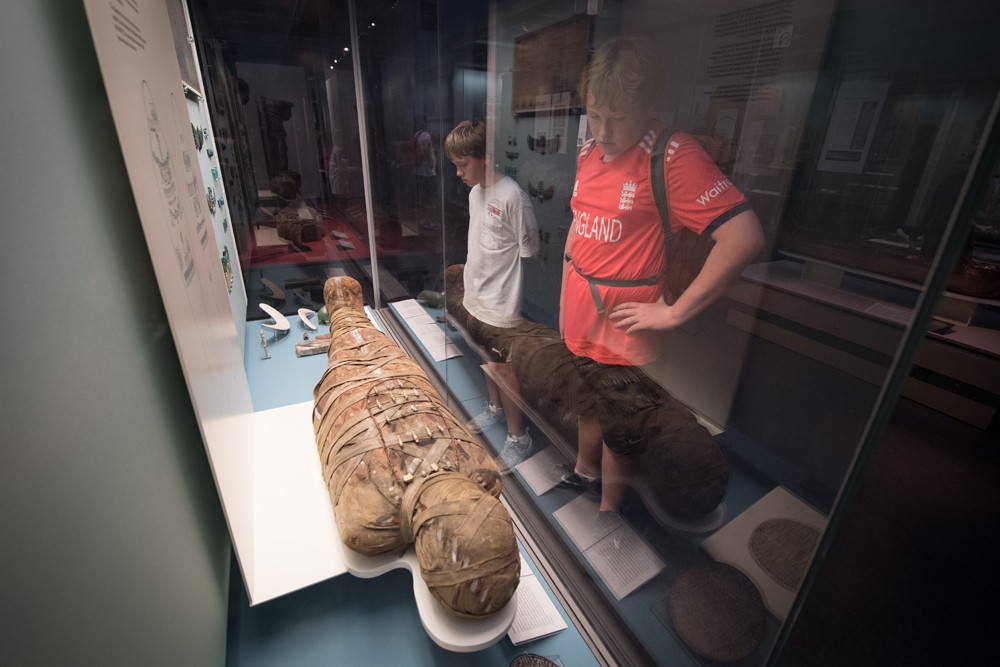 An Egyptian mummy in the British Museum.

DO hire a Blue Badge Guide for a day or two.

Without our guide, Sean, there would be many more things I would’ve wanted to skip. Our guide had insight on nearly everything in the city, he made the Tower of London come alive, and in Stonehenge we would have been lost without him. If you asked him a random question about London, his answer would never be “I don’t know.” We only had him for two days in London, but the amount of things we were able to see with him in that span was exceptional. I recommend hiring one, even if just for a day, as you won’t need one for an entire week. Try making it on the first day because your guide will have insight on what to do for the remainder of your stay. [Note from Wendy: We road-tested an extraordinarily kid-friendly guide who can’t be hired via the Blue Badge site. He is available via Jonathan Epstein, one of my Trusted Travel Experts for England.] 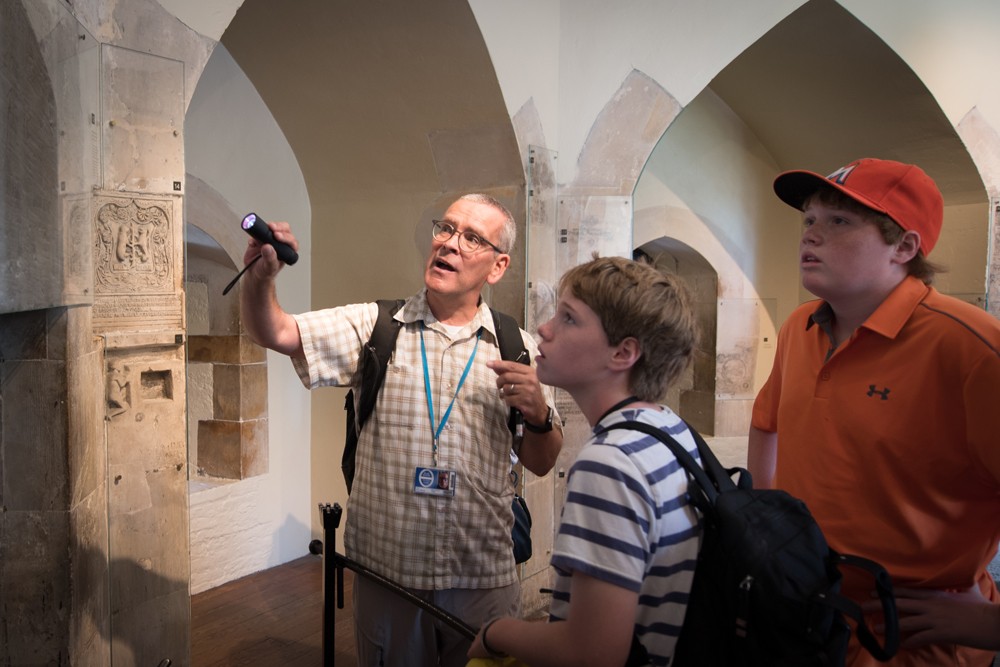 In the Tower of London, Sean showed us “graffiti” carved by prisoners centuries ago.

DON’T wait in a crowd to see the changing of the guard.

Some people will get to Buckingham Palace two hours before the changing of the guard starts to get a prime spot. If this is truly something you want to do, I won’t stop you. However, our guide knew where to go and got us a spot just outside the gate to the Wellington Barracks about 10 minutes before the change started. What’s more is that here, the guards walk right by your face, maybe three feet away. You also get to see the band playing before they start. Make sure you snag a spot in time on the sidewalk and hold your ground. Some people will go onto the cobblestones that they force you off of when the guards start and try to stand in front of you. Kindly ask them to move. 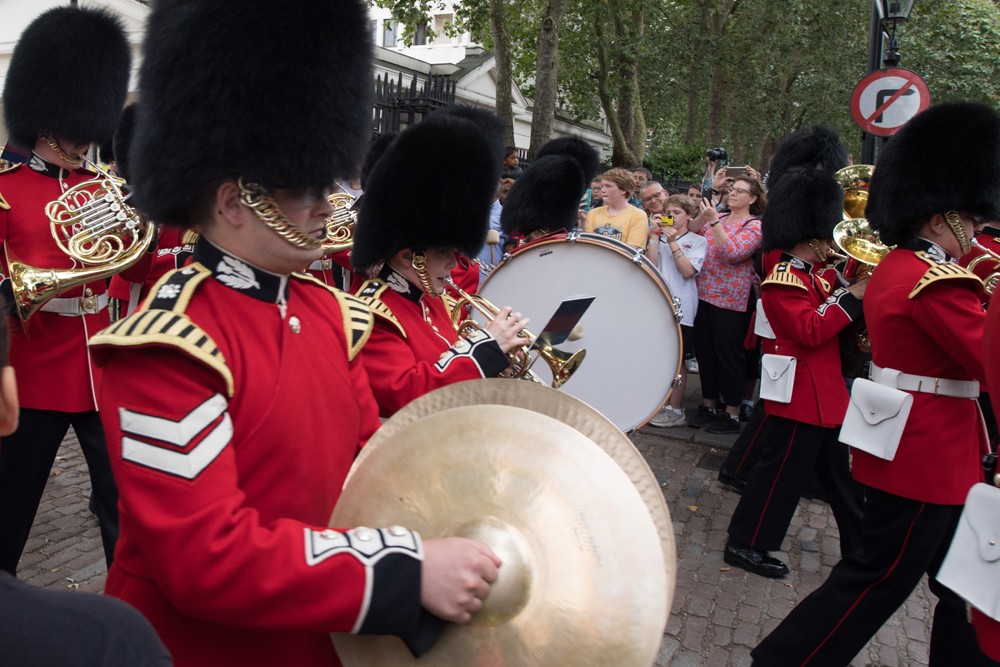 Here’s the band marching out of Wellington Barracks toward Buckingham Palace. My mom and brother and I all videotaped it.

DO spend some time at Borough Market.

Borough Market has been in business for more than 1,000 years. Schedule lunch there for one day, whether you have a bite in one of the restaurants or sample the many booths. There is some very interesting food there. The closest stand to where we ate sold ice cream from goats. Saturday is rush hour there, so if you want something less hectic, aim for a weekday. 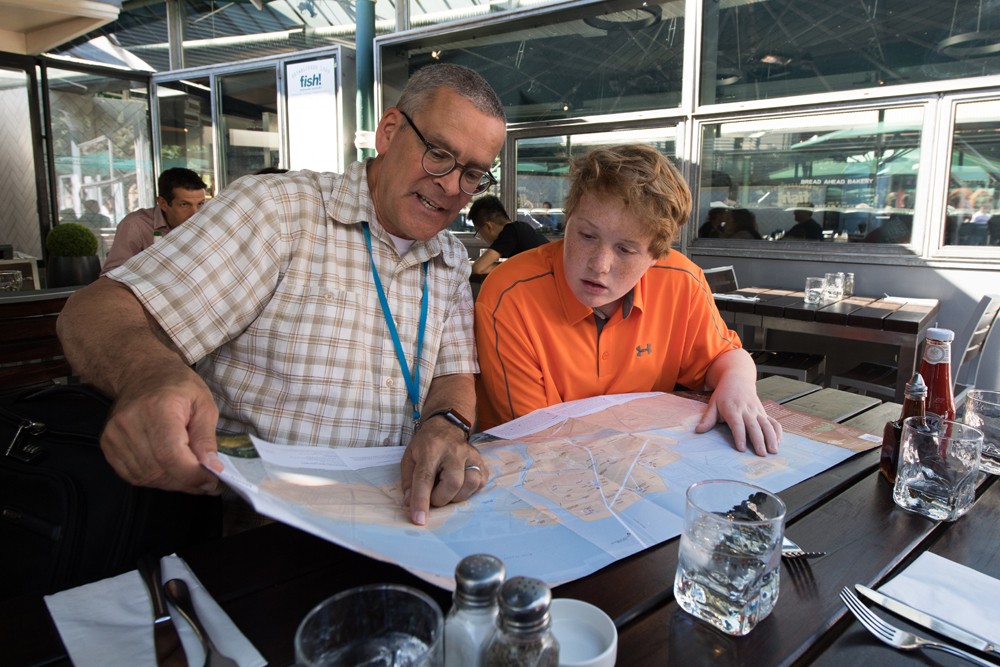 Our guide Sean taught me the geography of London during Roman times over lunch at Borough Market.

DON’T bring your wallet to Harrods.

Harrods was probably one of the most overrated places we visited. There’s not a lot to really see that you can’t see anywhere else. If you can drop in for a visit, go for it, but don’t prioritize it over something else. On top of that, the prices are marked up way too far. There was a toy there that in Hamley’s—which is definitely a place not to miss if you have kids—cost £3 for 2. In Harrods, the same exact toy cost £15 for 1, which is a 900% markup from Hamley’s. As for the food halls, there are 2 places within 10 minutes of our house that have better sushi than what we tried. However, if you buy anything at Harrods, the food is the way to go. 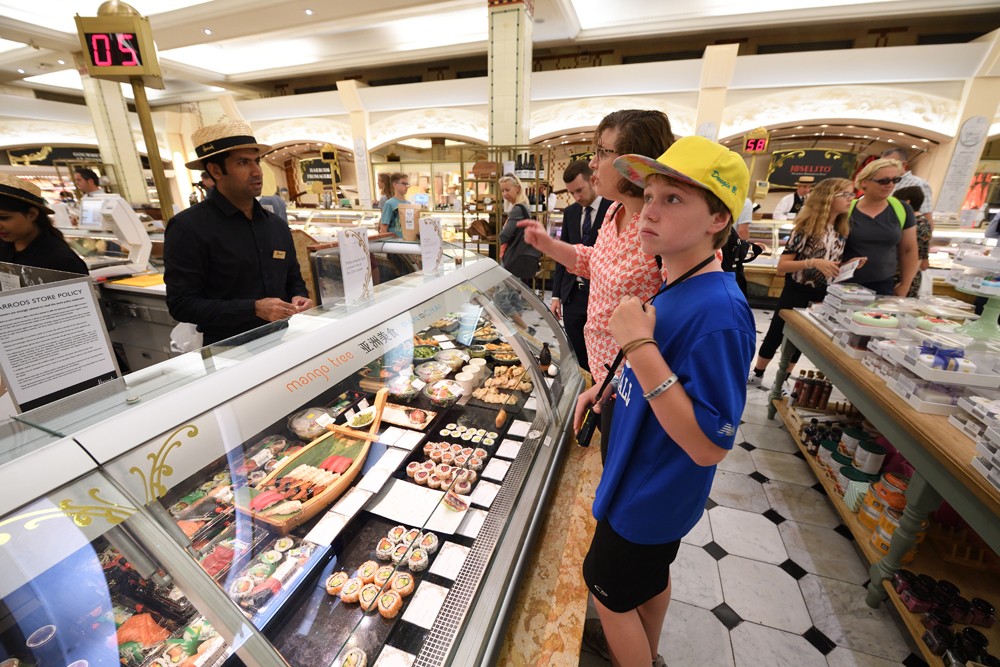 My mom and brother ordering sushi in the food halls at Harrods. 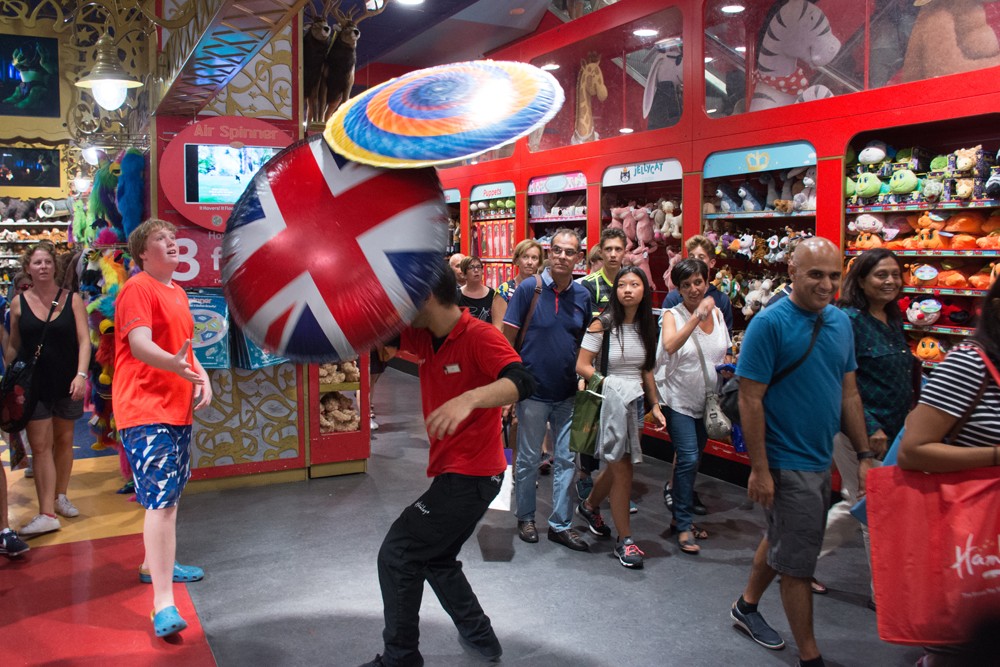 At Hamley’s, testing out the toy that ends up grossly overpriced at Harrods.

DO spend an evening at Covent Garden.

Come here with no plans but maybe a dinner reservation, and you’ll leave happy. There are lots of shops and restaurants to spend your time in, but the best part was the performances in the square. I saw this pantomime starting his act while I was waiting for my brother and mom to get out of a shop, and we all ended up watching his show until the end, laughing the whole time. Spend an evening here and it won’t go wrong. 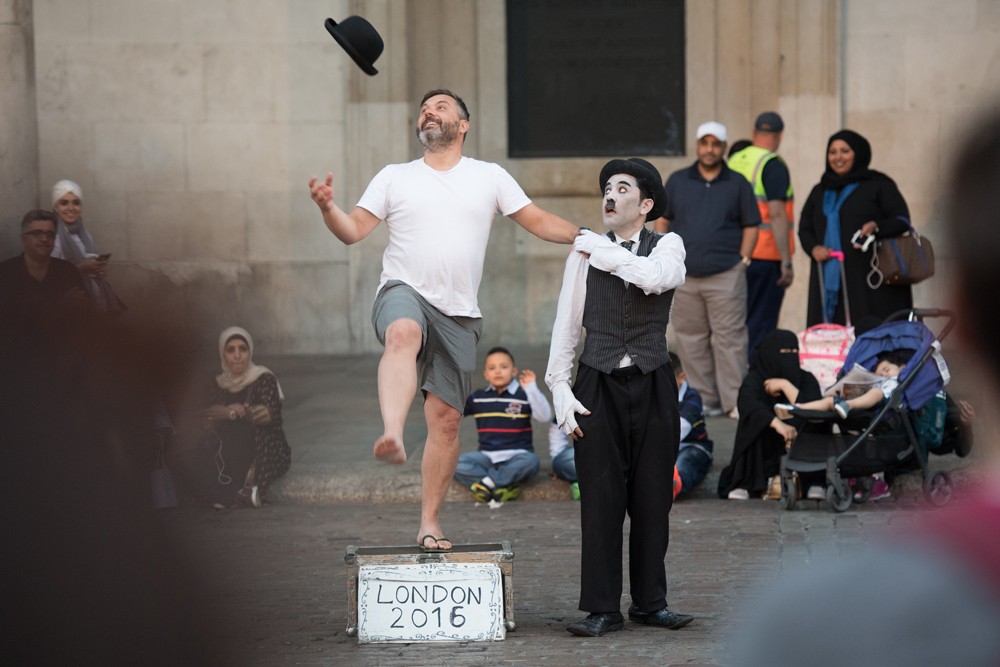 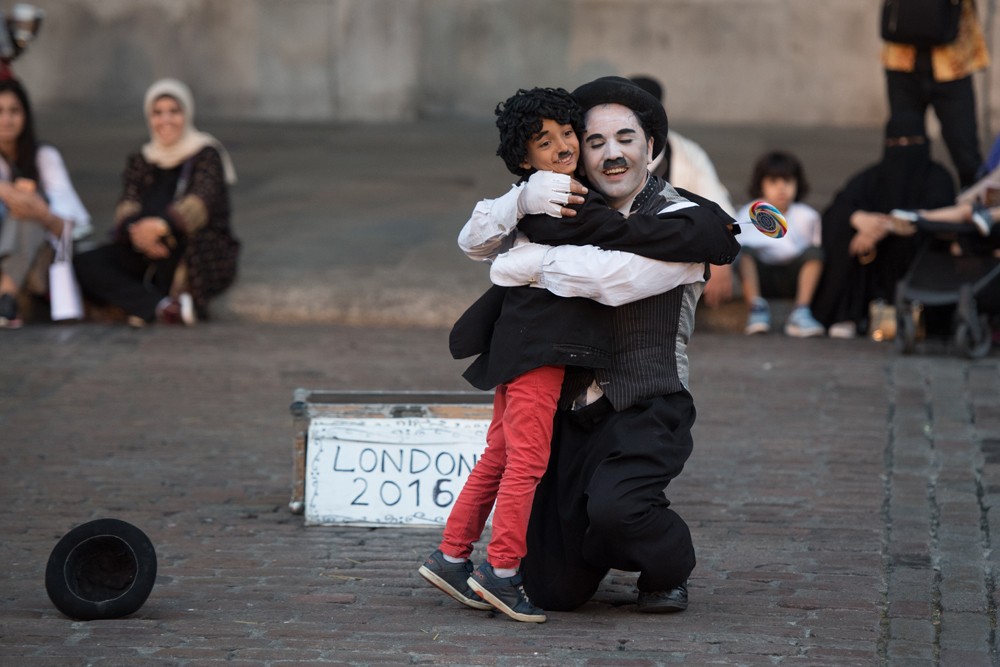 At the end of the show he gave a hug to his sidekick plucked from the audience.

What Not to Do in the Caribbean