My Best Travel Mistake: Climbing Mount Sinai for the Sunset 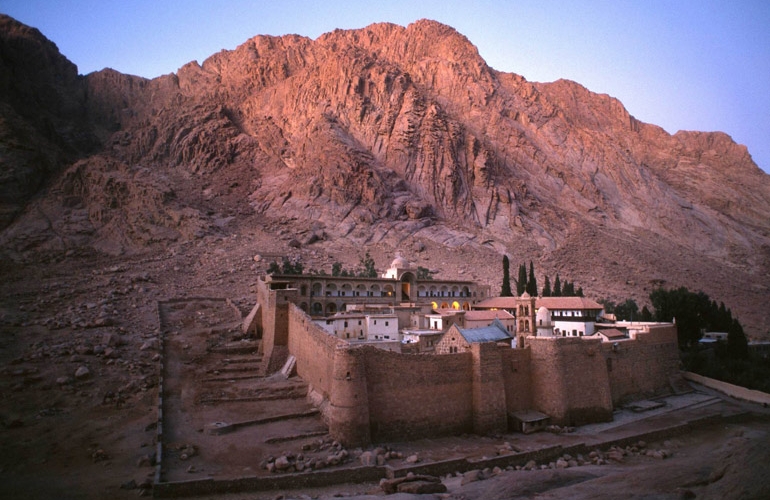 We’ve all been through travel nightmares that over time have turned into fond memories. Maybe you were lost for hours in a maze of back alleys in some gritty Beijing hutong where nobody spoke English but you eventually found your way back to your hotel. Maybe a flight cancellation stranded you on a remote Pacific island for three days but you ended up making great friends and learning how to boil kava.

My biggest travel mistake happened in Egypt. Tim and I had driven across the Sinai Desert to see St. Catherine’s Monastery—the sixth century cloister at the foot of Mount Sinai—and had decided to climb to the top of the mountain for the sunset. The path was rocky and precarious, but after about two and a half hours we had made it up the 7,500 feet. We were virtually the only people at the summit at sunset. It was one of those perfect travel moments.

Until the sun disappeared behind the mountain and we realized there was no light anywhere in the desert. We somehow had to get all the way back down that mountain in the pitch dark. The descent was treacherous, and the only reason I’m alive today to tell the tale is that I was wearing sturdy shoes and Tim happened to have a Mini Maglite flashlight in his pocket.

What turned this ordeal into a cherished memory was what greeted us when we finally reached the bottom. It was like we had landed in Lawrence of Arabia. A blanket of stars had come out, and beside the ancient cloister, crouched around a flickering campfire, was a group of friendly Bedouin and their camels, making dinner and telling stories in an incomprehensible but mesmerizing tongue. We were, again, the only travelers around. That movie-set finish to our day is seared in my memory, and somehow over time that harrowing Mount Sinai descent has turned into one of the highlights of my travel history.

1. The next time I climb to the top of a mountain, it will be for the sunrise.

2. No matter what time of day, I’ll be carrying a Mini Maglite.

3. Don’t let State Department travel alerts cause you to misperceive the real risks. As is often the case, the risk of death by violent human attack or explosive device is far less than the risk of death from simply wearing the wrong shoes.

What was your worst travel mistake that turned into an amazing memory? I just might collect the best stories and share them with everyone.

A New Solution to a Big Consumer Travel Problem