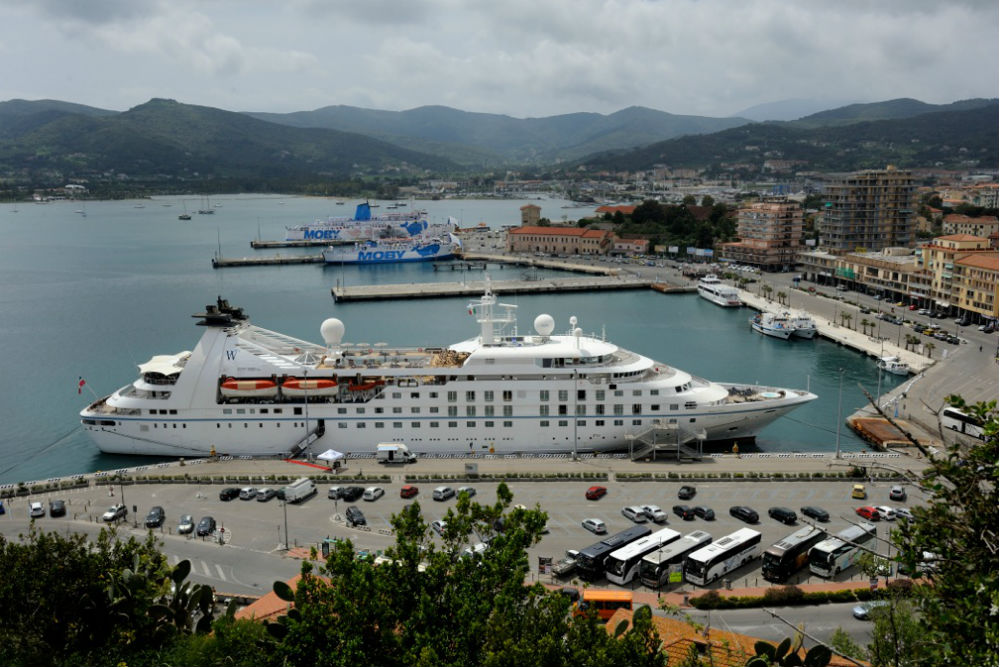 Windstar’s Star Breeze on the island of Elba, during the inaugural cruise when Wendy was godmother. The Star Breeze was the only cruise ship in port that day. Photo: Tim Baker

Many years ago Windstar changed my view of what a cruise could be.

I was invited onboard as a guest lecturer, and I took my dad. We sailed to all these little Caribbean islands you’d normally never get to—Bequia, Ile des Saintes, Jost Van Dyke, Virgin Gorda…. What we loved most were the picture-postcard views as we sailed into and out of each harbor. In every port we were the only cruise ship. And what my dad really loved was that our bartender remembered his favorite drink from Day One and just automatically brought it to him, whenever he showed up.

Fast forward a few years. I was scheduled to be a guest lecturer again, and it was right after my wedding, so I took Tim, and it morphed into our honeymoon. Again we went to all these little unusual ports, this time in the Mediterranean: Kefalonia, Zakynthos, Monemvasia, Taormina, Corsica, Elba…. We even had the same bartender. His name was Danny. The fact that I even remember his name speaks volumes: Every time you’re back on Windstar, you’re back with family.

What I love most about Windstar is that it takes you to those hidden-gem places that would otherwise be too logistically difficult, time-consuming, or expensive to get to. That’s why Windstar changed my idea of what a cruise could be.

So I was honored when, a couple of years ago, Windstar named me godmother of its new ship Star Breeze. And I was happy to invite Windstar to sponsor the 2nd annual Wendy Perrin Global Travel Summit and to have president John Delaney share news about the company’s plans for 2017. Here’s a sneak peek at what’s coming: 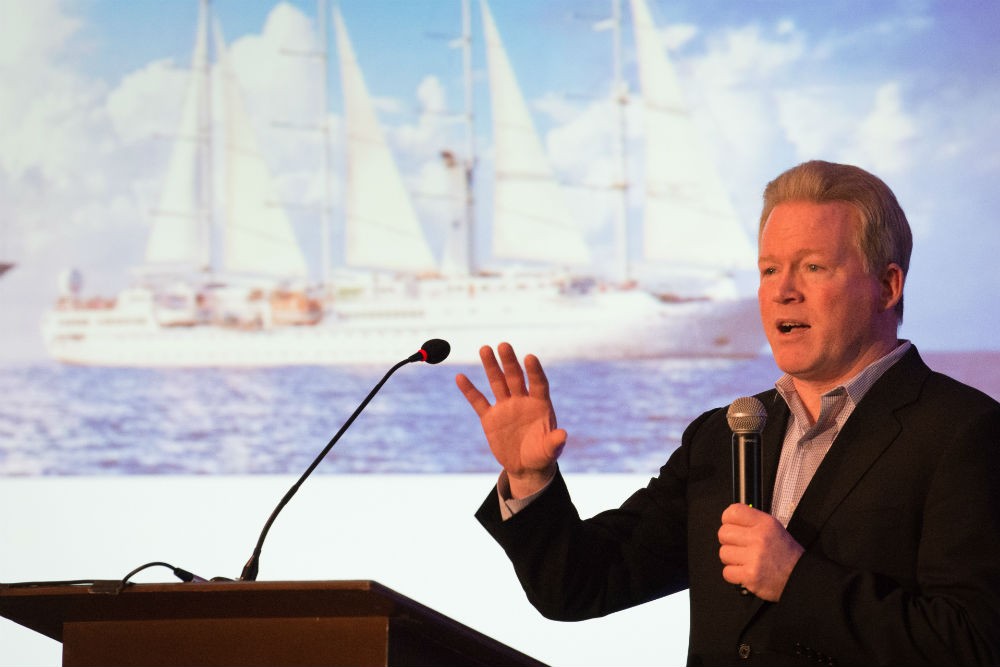 Returning to an old favorite

I’m so proud of Windstar for being one of only a few cruise lines sailing to Turkey in 2017. The port of call is Kusadasi. “We truly struggled with our decision to cancel Turkey last year because people love it, and it delivers,” Delaney told us. “But clearly we’re never going to do something that isn’t safe. We couldn’t accept the level of risk in Istanbul. But Kusadasi was never in the warnings by the U.S. State Department; that part of Turkey wasn’t included. And [nearby] Ephesus is a bucket-list place.”  To maintain a level of safety, he says, Windstar will continue to rely on State Department information and warnings.

The line is adding new itineraries in new regions, most notably Alaska and Asia (with completely new trips to the Philippines, China, and Japan). “On every itinerary, there will be at least one port you physically can’t get into with a bigger ship,” Delaney said.  In Alaska, for example, guests on the 212-passenger Star Legend will be able to float right into Misty Fjords and Kenai Fjords. “Our ship that is doing Asia is the largest that can go all the way up the river to Bangkok,” he added. “Seville is another great example: We can sail right into downtown Seville. And the Corinth Canal—being able to do that wonder of the world is an incredible experience.”  In addition to introducing these new ports, Delaney says, Windstar will be extending port hours and adding more overnights on a variety of sailings across the board.

Delaney, who joined Windstar as president only seven months ago, shared what he described as his own personal focus for 2017: creating small, bespoke shore excursions open to only a handful of travelers at a time. “What I want to do is create regular offerings as part of our shore-excursion program that are the types of experiences WOW List travel specialists are able to put together: accessing ancient ruins before they open to the public, being in a local family home for a true cooking experience in Tuscany, etc. We’re trying to create once-in-a-lifetime experiences.” You can expect these to roll out on European sailings in the summer of 2018, though Delaney says he will be improving Windstar’s regular shore excursions along the way too. “We’ll make sure guests are seeing the best of the best,” he said. “We don’t plan shore excursions the way the big lines do—we don’t have to plan for thousands of passenger throughout. We’re small and different.”

Enhancing the onboard experience

Delaney says Windstar is also finding ways to improve the shipboard experience. Two new hires are going to help with that: Last week, Peter Tobler joined the small-ship cruise line as Director of Marine Hotel Operations, and back in November, cruise-industry veteran Christopher Prelog was brought on as Vice President of Fleet Operations. These may sound like bigwig positions that couldn’t possibly have any effect on your personal time onboard, but in reality they have quite an impact. Tobler has more than 30 years’ experience in the culinary side of cruising, and his new programs—which Delaney says will include changes such as locally inspired menus, special events, enhanced wine offerings, and new cocktail menus—will create the flavor of your foodie experiences onboard. Likewise, the arrival of Prelog suggests that Windstar is interested in finding ways to upgrade its ships with more luxurious and personal touches. As an example, Delaney mentioned a possible “sleeping program” that would let guests choose from a menu of scents, pillows, herbal teas, and turndown music or video. “Chris has a knack for innovation and surprise,” he said, “So stay tuned.”

I’ll be watching—not only because I’m godmother to the Star Breeze, but also because it was fascinating to watch a cruise line president get up on stage at our summit to give a presentation about what’s coming in 2017, and then watch it evolve into a collaborative brainstorming session with our Trusted Travel Experts.  John was eager to hear their thoughts and feedback on what he’s introducing, and I have no doubt that our WOW Listers just gave Windstar a few more ideas about what discerning travelers like you really want. I’ll be eager to hear about your upcoming experiences onboard Windstar ships.  Please keep me posted! 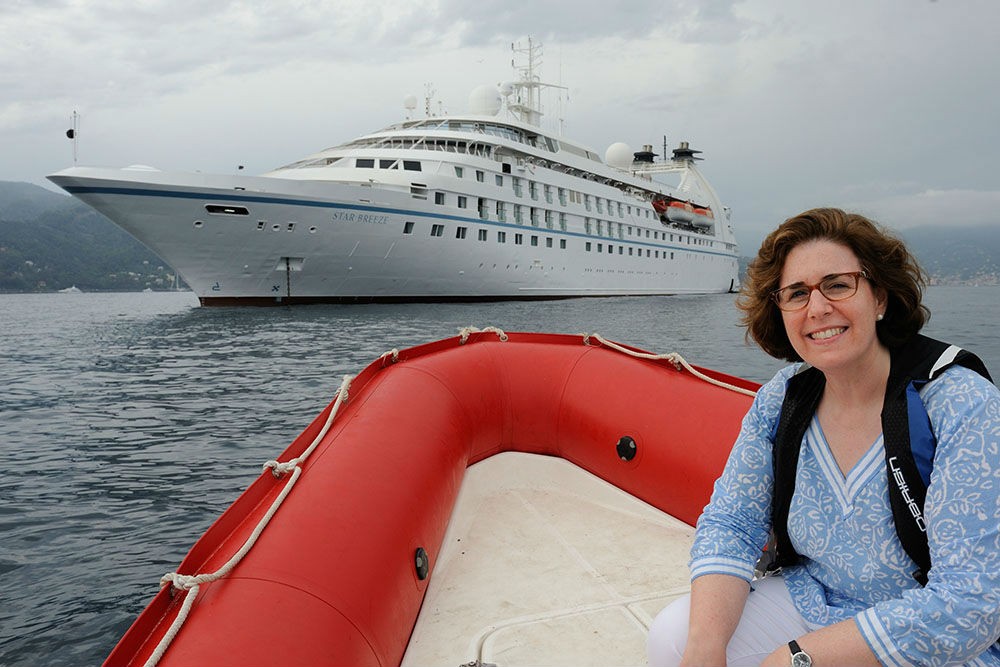 Last week I christened Windstar Cruises’ newest ship, the 212-passenger Star Breeze, and then hosted the inaugural voyage to Rome.

Is a Small-Ship Cruise Right for You? These Photos Will Help You Decide 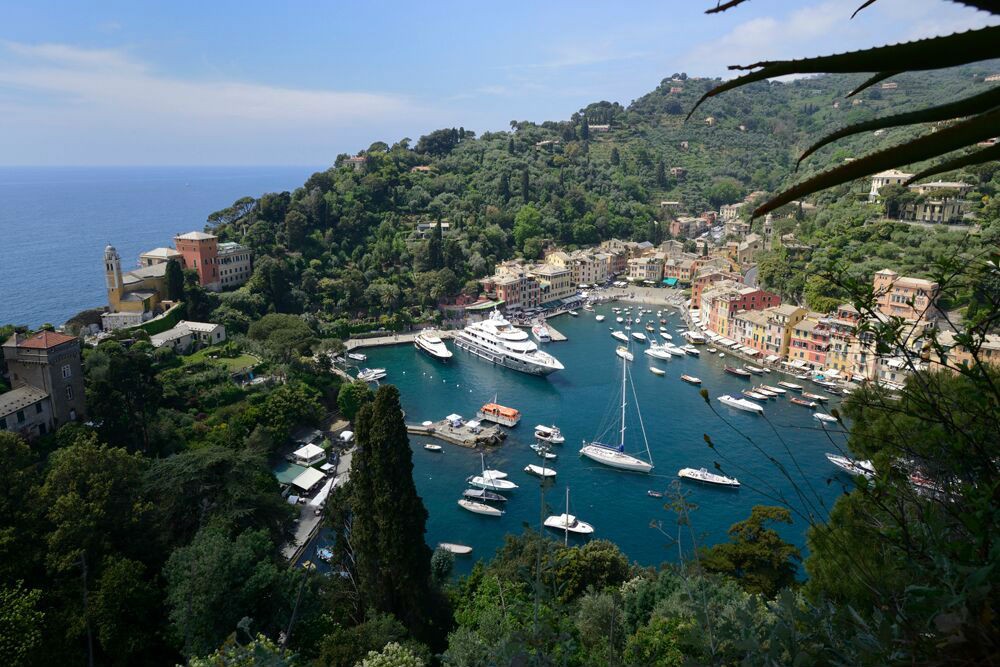 As the husband of the godmother of a cruise ship, I got to experience, and photograph, the inaugural sailing of Windstar Cruises’ Star Breeze.

WOW Moment: A Fjord of One’s Own