My Biggest Travel Surprise: A Ski Trip to Andorra 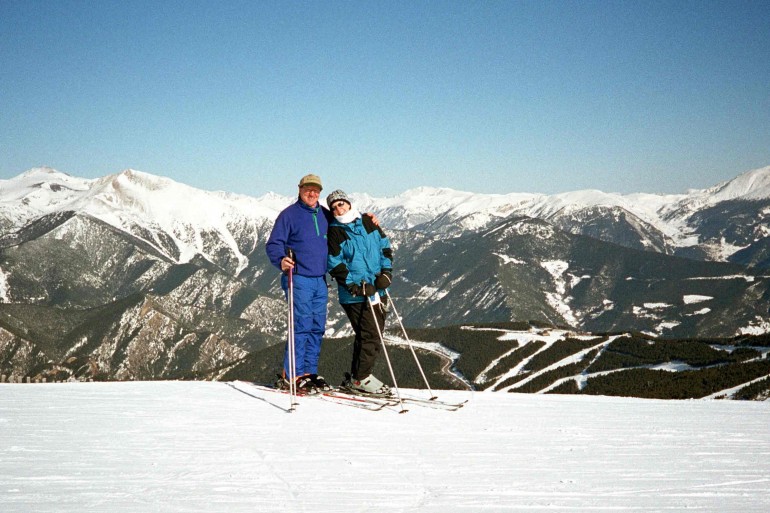 My most romantic trip ever: a surprise ski vacation in the Pyrenees with Tim

My most romantic trip ever came as a total surprise. One evening when the kids were toddlers and we were living in midtown Manhattan, the doorbell rang and there stood two unexpected visitors from California: Tim’s sister Linda and brother-in-law Ken. Tim had arranged for them to watch the kids for five nights so he could whisk me away on a surprise Valentine’s Day trip. He handed me an already packed suitcase, and we were off to J.F.K.

Thus began our first trip alone together since the kids were born. I didn’t have a clue where we were headed. In fact, when we landed in Amsterdam for our connecting flight and the Immigration officer asked me what my final destination was, I had to answer, “I have no idea!” His reply: “Are you being kidnapped?” Me: “Sort of.”

Even when I learned that our connecting flight was to Barcelona, I still couldn’t guess our final destination. It couldn’t be Barcelona, since Tim and I had already been there together; I knew he would choose a place where neither of us had ever been, so we could discover it together for the first time.

At the Barcelona airport we picked up a rental car and drove north until I finally figured out where we must be headed: Andorra. Yes, Europe’s sixth smallest nation—the one between Spain and France. Since the month was February, and we were in the Pyrenees, clearly we would be hitting the ski slopes.

Now, when I say that this was my most romantic trip ever, don’t misunderstand: Andorra itself is hardly romantic. It’s not the dreamy, charming European principality you probably envision. It’s got more than its fair share of ugly buildings, traffic (there’s only one road in and out of the country), and discount stores (it’s a tax-haven shopping mecca for European deal seekers). It’s definitely not Spain, and it’s certainly not France, and even after several days there, I’m still not sure what it is. It’s an unusual place. But investigating unusual places is what Tim and I like to do, and we were thrilled to be able to do it the way we used to, B.K. (Before Kids). Plus the sky was blue, the skiing was great, and the Mephisto shoes were 40 percent off.

So you can get a feel for Andorra, here’s my photo album:

A traditional pitcher called a porron

The most charming town we found: Ordino

Caldea: the best nightlife we found

Driving from Andorra into France

How Omicron could affect your travels