Dispatch from Paris: What It’s Like to Travel in France Right Now 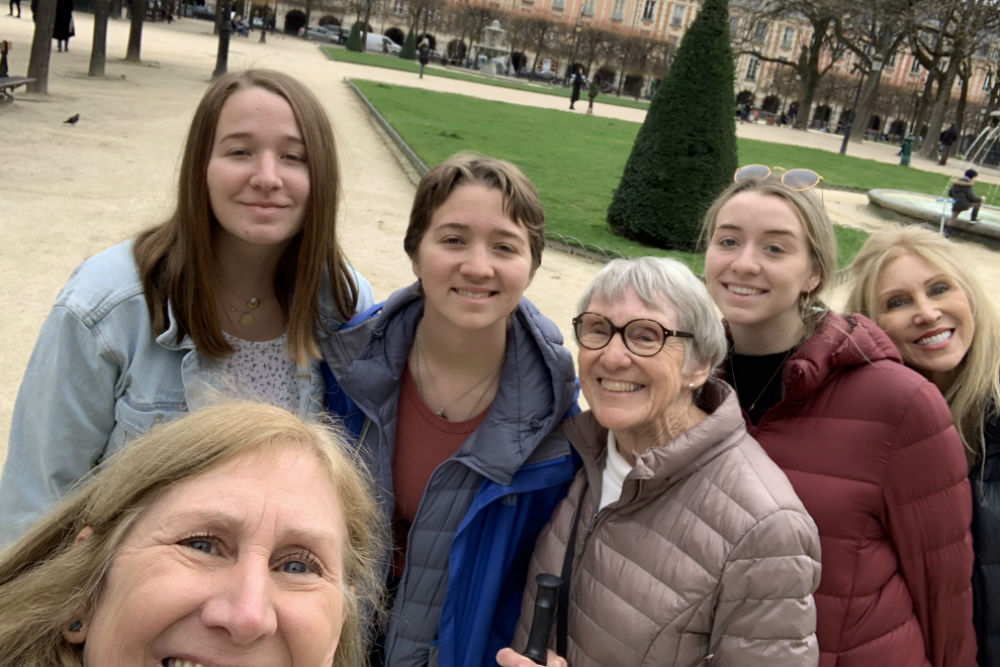 PLEASE NOTE: Our ongoing efforts to check in with travelers who are currently overseas does not necessarily mean we advocate international travel during the COVID-19 epidemic.  Public health officials are advising older adults and people with underlying health conditions to abstain from travel.

In our continuing effort to answer readers’ questions about travel in this uncertain time, and to touch base with those who are traveling internationally now, we are interviewing readers who are currently overseas.  Although we are speaking with them at the moment they are abroad and publishing as quickly as possible, we realize that the situations in those locations and around the world are changing quickly, and therefore travel alerts, health advisories, and even these travelers’ opinions may soon be different.

We are grateful to WendyPerrin.com reader Deborah Wente, who spoke with us from Paris on Sunday, March 8. Mrs. Wente is a frequent traveler to France. She spent a college semester in the south of France. lived there after graduation, and now visits the country every year. “I know the city well, I’ve been in Paris five times in the past four years,” she told us over the phone as she walked around Montmartre. “Life is normal.”

At the time of the interview and writing of this article, the U.S. State Department had France at a level 2 travel alert—for terrorism concerns from April 2019. The coronavirus count in France did see a surge in the past week: On March 6, when Mrs. Wente flew from Chicago’s O’Hare airport, the count was 577 cases and 9 deaths. When she and I spoke on March 8, the count was 959 cases and 11 deaths. (It’s not clear whether this apparent surge is from actual virus spread or from increased reporting.) School closures in two departments (similar to states) were announced March 6, and the Paris marathon has been rescheduled from April 5 to October 18.

Though a lot of this escalated once Mrs. Wente was already in Paris, she said she and her family never considered canceling. The trip was to celebrate the 18th birthday of one of Mrs. Wente’s nieces, who is living in Toulouse. The rest of the group consisted of Mrs. Wente’s other two nieces, her sister, and their 81-year-old mother, who accompanies Mrs. Wente on her other trips to France each year. (Public health officials are advising older people, and people with underlying health conditions, not to take planes right now and to keep space between yourself and others.) The Louvre and other museums are open.

Mrs. Wente, from Sheboygan, Wisconsin, shared photos, video, and candid thoughts with us:

Q: Was there really no hesitation in your group about travel to France at this time? 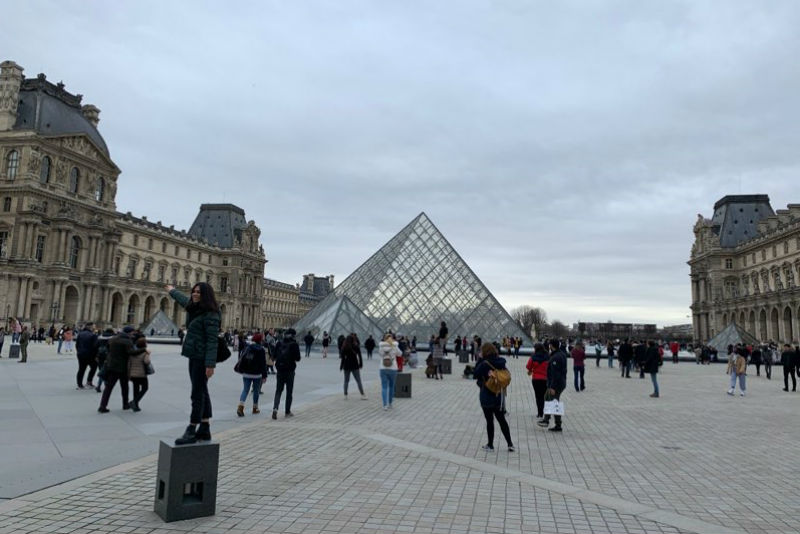 Contrary to some misconceptions, even by Parisians, the Louvre is open. The entrance looked uncrowded when Mrs. Wente passed by, but she saw a long line to get into another museum, the Pompidou Centre. Photo courtesy Deborah Wente

A: Well, it seems a little blown out of proportion. But I did read something in The New York Times that helps me understand that they’re trying to get it under control. I also just feel like I don’t worry about terrorists when I come to Paris. If it’s for the greater good of society, then at some point I might not go, but I just feel like you have to live your life. My mom is in the vulnerable category, but we kind of didn’t worry about that either.

Q: What is it like there now? How does it feel?

A: I’ve been to Paris a lot, I know the city well, and I speak French so I talked to my Uber driver and other people. The Uber driver said, “Look at the French, we don’t care, we’re going to live our lives.” He thought tourism was down; he said they were seeing fewer travelers. But another woman I spoke to in Place du Tertre by Sacre Coeur said it’s just not a big weekend. It’s early March and cold and raining; it’s not high season. Then yesterday I was walking past the Pompidou, and it was packed. That was Saturday mid-afternoon. Tons of people. So I don’t really know if it’s quieter. Is it because it’s early March?

One woman Uber driver kind of went on a rant about how she cleans the car all the time and wipes stuff down when passengers leave and doesn’t touch any of their stuff. But other than her, they’re just like meh. 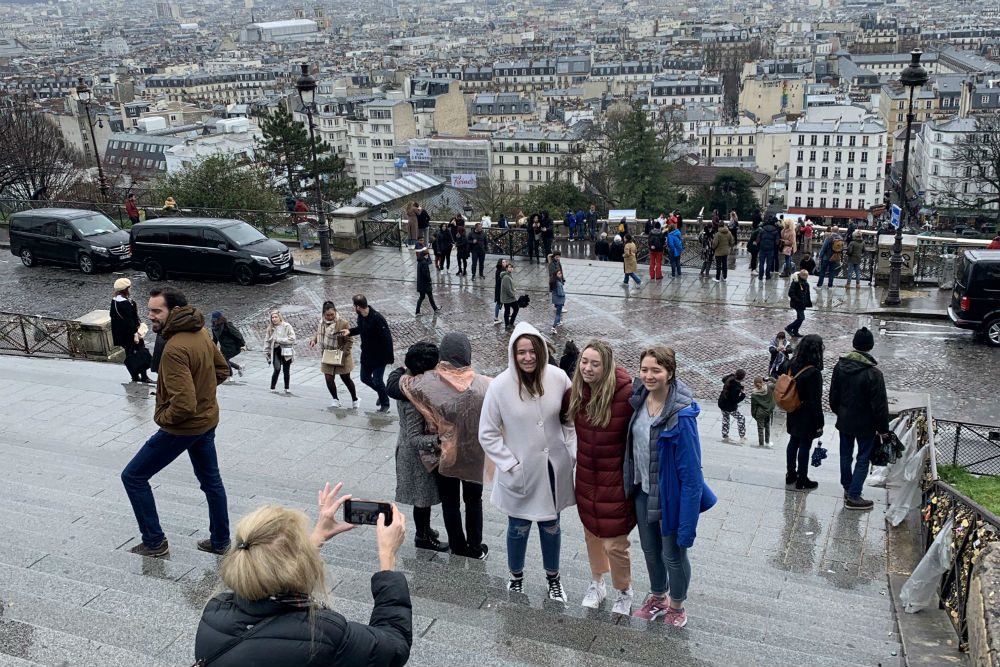 It was rainy and cold the weekend Mrs. Wente and her extended family visited Paris, and she wonders if the season was part of the reason it seemed less crowded. Photo courtesy Deborah Wente

Q: What have you been doing during your trip? Is the coronavirus affecting what you’re doing and seeing?

A: We went to the Rodin Museum and it was quiet, but it was Friday afternoon. We went to the Breizh Café in Le Marais. We went to our friends’ house for dinner about 45 minutes outside the city. And today, my sister went to the Catacombs with her daughters; I didn’t go because I’ve done that. And then we went to the Village Royal; it’s a little street with high-end stores, and an artist put up a canopy of pink umbrellas there. I took a photo because I was trying to show that it’s not that crowded. We walked past the Louvre but we didn’t go in. There are people, but it’s not crazy packed. There was that huge line to get into the Pompidou yesterday. We thought about going to another museum today but didn’t want to wait in line.

Q: Have you been reading or watching the news in Paris? How is it different from here?

A: I get the New York Times daily briefing and the Times’ coronavirus briefing, and that’s all I’ve been reading on vacation. I did learn how to clean my seat on the airplane. I’m washing my hands and sanitizing and doing the things that the CDC says are important.

Q: What kind of precautions are you seeing around the city?

A: There was hand sanitizer at our hotel. The restaurants have sanitizer. The Breizh Café had a big hand sanitizer, but they’re still bringing out baskets of bread. It’s all the France that I know and love. I’m standing right now in Montmartre, and there’s a man playing the accordion, and it’s like a French movie.

Life is normal. We’ve maybe seen like three masks on people. There are always Asian people with masks anywhere you go. We just haven’t seen that many masks.

A: People are so nice. We had so many special little experiences with people. Like three older women we met at a restaurant. When the waiter brought dessert and a glass of Champagne for my niece’s birthday, we started singing “Joyeux Anniversaire.” And they joined in singing and then came over and chatted with us. One was 83 and used to sing in a chorus. It was so nice.

Q: How is being there different than being in the US?

A: I feel like people at home are way more concerned. I have been watching on Facebook, and it’s spring break now, and a lot of my friends have kids in school, and they are cancelling trips. I haven’t watched the news here, but I feel like there’s way more hype at home. I get that it’s important and we want to stop it from spreading, but I feel like it’s much calmer here in Paris. There were more people wearing masks in the Chicago airport than here. I saw the picture of the plane that ran in your Italy story. Our plane was not empty. I walked through, and coach was pretty darn full. 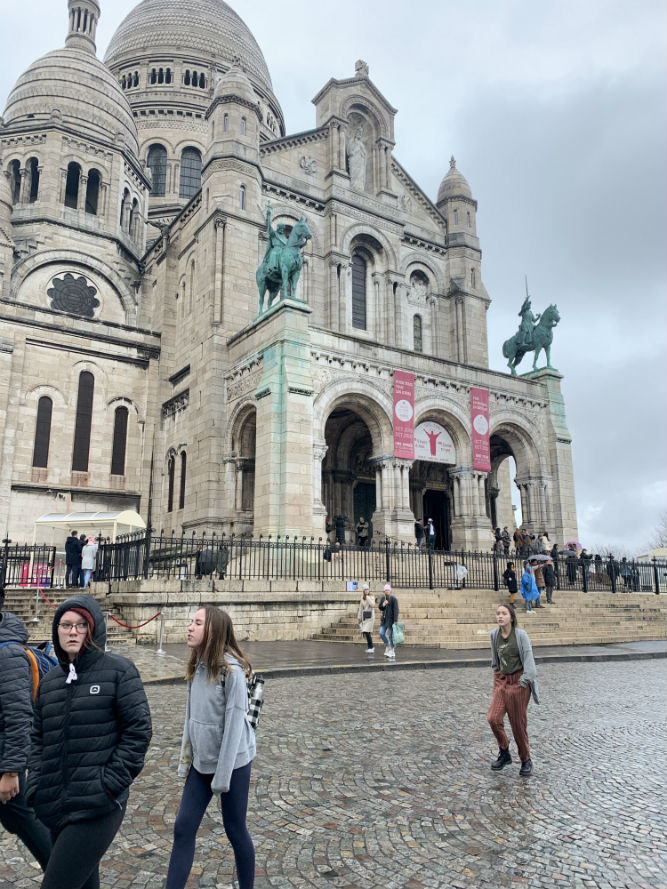 Mrs. Wente didn’t see many people wearing masks as she walked around the Sacre Coeur area in Montmartre.

Facebook0Twitter1Google plus0
On the road

Traveling through Europe as the Coronavirus Spread: A Family’s Experience 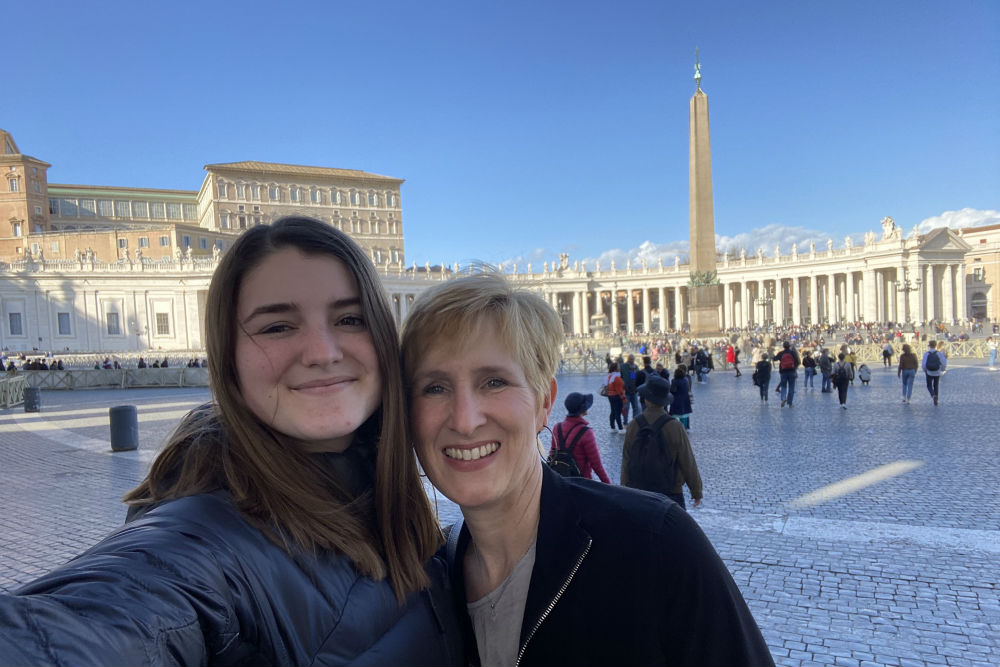 A lot of our readers, frequent travelers that they are, have asked what it’s really like out there for those who are forging ahead with their trips. As a result, we’re interviewing WendyPerrin.com readers who are traveling right now.

Everyone has a different comfort level when it comes to travel during the COVID-19 outbreak. Whether you’re overseas or staying home, cancelling a trip or planning one, my team and I are here to advise you as best we can. Click through to read what our travelers are doing and how to proceed wisely.