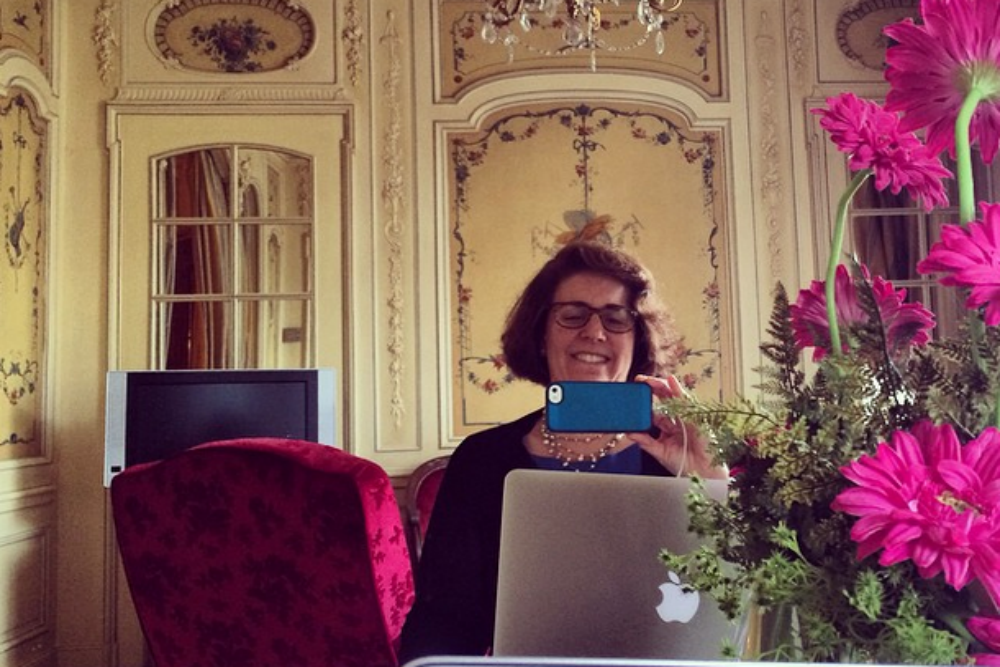 A selfie Wendy shot while working in her room at the Hôtel Raphael in Paris last month.

I’m just back from Paris, where the big travel news is the new wave of Asian-owned ultra-luxe hotels challenging the city’s five-star old guard. The Peninsula Paris just opened in August after a billion-dollar investment and joins two other properties built since 2010, the Shangri-La Hotel and the Mandarin Oriental, with the aim of pampering a fussy new breed of mega-rich international travelers from Asia and other emerging economies. Trying to keep up, the grande dames of the Paris hotel scene have been sprucing themselves up: The Bristol just finished a six-year renovation, the Hôtel Plaza Athenée a $268 millon facelift.

Well, I did not stay in any of them. Instead I chose a classic family-owned hotel that’s just across the street from the Peninsula (and a stone’s throw from the Arc de Triomphe): the Hôtel Raphael. It’s quintessential Paris: an old-world mansion with a stellar concierge desk, a breakfast room out of a Parisian film, and a roof garden with panoramic views of the city. It’s even got a sister hotel, with a fabulous indoor pool you can use, a two-minute walk away. The pièce de resistance was this lovely room, fit for an empress (30-second tour shot with my iPhone):

Asian-owned hotels that cost upwards of $1,300 a night may be getting all the publicity these days, but classics like the Raphael shouldn’t be overlooked—and here’s my Instagram album to prove it.

My classic old-world home in #Paris. More than 60 movies have been shot here. #HotelRaphael

The #HotelRaphael’s rooftop terrace/garden/bar is closed for the winter, but I snuck up anyway. #Paris #TourEiffel

Bonjour from #Paris! Here’s a 15-second taste of the 16th arrondissement from my balcony at the #HotelRaphael. (Yes, that’s the new Peninsula across the street.)

My delightfully #Parisian room at #HotelRaphael in the 16th, a stone’s throw from L’Arc de Triomphe. #fitforanempress

Every once in a while it’s nice to have a #mosaic in one’s #bathtub. :) #HotelRaphael #Paris

Back on Avenue Kléber, one of the 12 boulevards that lead out of the Place de l’Étoile and prime Haussmann territory.

The Hôtel Raphael was kind enough to provide me with complimentary accommodations. In keeping with my standard practice, there was no request for or expectation of coverage on the hotel’s part, nor was anything promised on mine. I simply adored the hotel–its intimacy, its old-world charm, the hop-to-it service shown by its polished yet warm staff—and so I want to be sure you know about it, as a convenient five-star alternative to the new $1,300-a-night hotels that are getting all the press nowadays.

What’s your favorite hotel in Paris?