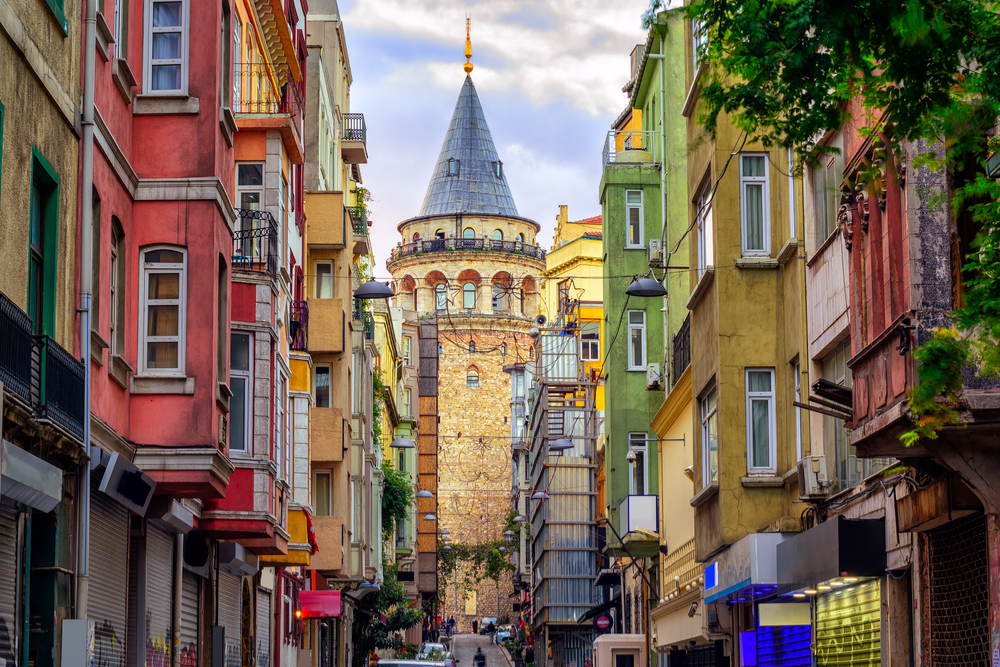 The insider advice on this page is from one of Wendy’s Trusted Travel Experts for Turkey: Earl Starkey of Sophisticated-Travel.

Turkey has been Earl’s second home since he first ventured to Cappadocia 20 years ago. He opened Sophisticated Travel in 2002 to offer travelers tailor-made luxury itineraries with a wider array of cultural and culinary experiences than were typically available at the time. He now lives half the year in Istanbul but is constantly crisscrossing the country to stay abreast of the latest hotel, restaurant, and gallery openings and to collect even more uniquely Turkish experiences that other travel firms don’t offer—say, a private cooking lesson in the home of a noted chef or access to a normally off-limits ancient ruin. Earl knows that a guide can make or break a trip, and he is known for handpicking only the savviest, all of them highly educated, personable, and accomplished in their own right. 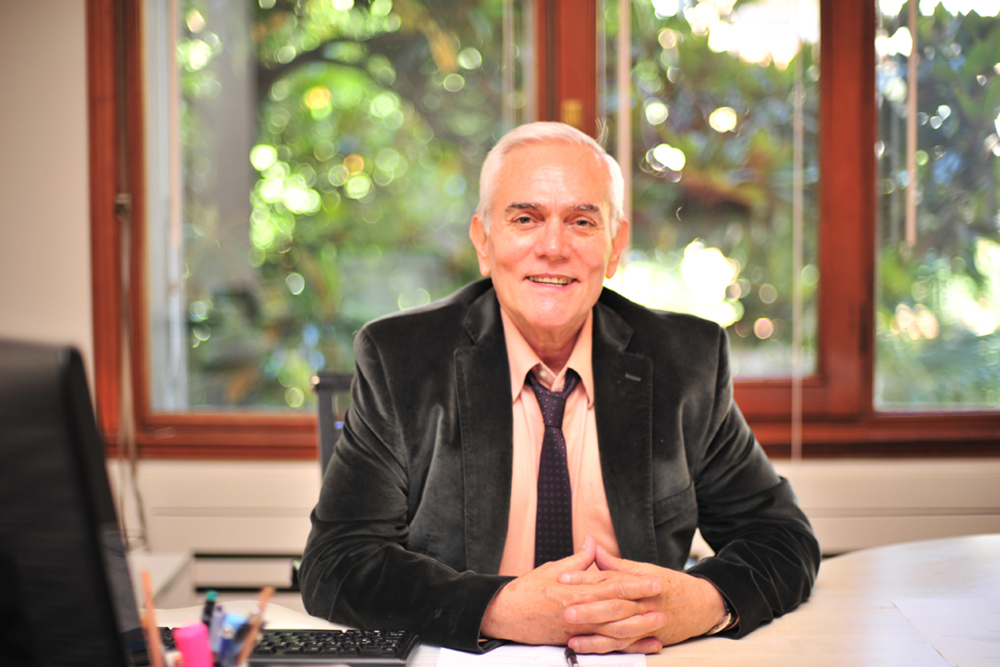 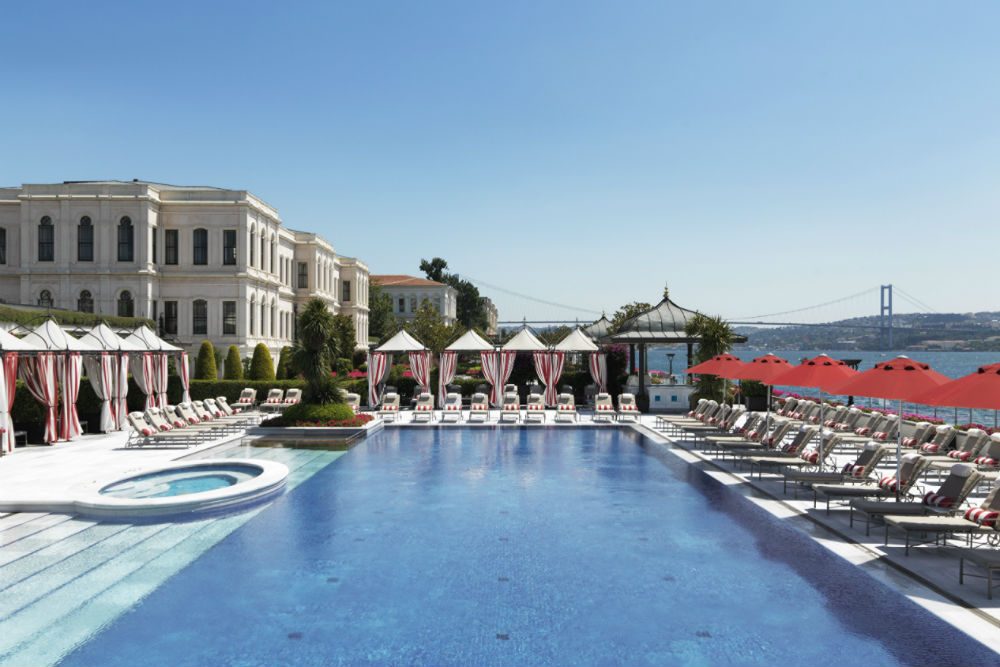 Hotels worth the splurge

The Four Seasons Bosphorus is the best hotel in Istanbul. Book one of the Courtyard rooms or Palace Courtyard rooms, as they’re a third the price of Bosphorus-view rooms—you can enjoy the views of the water from the hotel’s huge terrace or the restaurant and save a fortune. Earl’s travelers receive a full American breakfast, either in their room or in the restaurant, a $100 food and beverage credit, and a one-category upgrade based on availability.

People also love the Park Hyatt. There is no view here, but the rooms are beautiful, and there is a lovely pool on the terrace. The hotel is in the Nisantasi neighborhood, which is one of the chicest areas of Istanbul. Earl’s travelers receive breakfast and a space-available upgrade here.

If a fabulous vista is a top priority, your best option is the St. Regis, also in the Nisantasi neighborhood. The rooms are wonderfully done and there’s also a Spago restaurant on the roof and a large spa (though no outdoor pool).

There is also a Raffles, with probably the most gorgeous rooms in all of Istanbul (and the largest, among the five-star options). Book one of the Signature Rooms, which have floor-to-ceiling windows that look out on the Bosphorus.

At Ciya Sofrasi, in Kadikoy, on the Asian side of Istanbul, Chef Musa Dagdeverin is a culinary archaeologist, unearthing long-forgotten Anatolian foods from all over Turkey and preparing them with the finest and freshest ingredients.

Savoy Balikci is a local fish tavern, and a favorite hangout among locals. Have whatever fish is in season—in winter, order the hamsi (fried anchovies). All the mezes are great, too.

Nrbizade Street, behind the Cicek Pasaj, has always been popular. There are lots of taverns here, and most of them are good, but Nevizade Restaurant is the most reliable.

Turks often like a simple place that serves international cuisine—pizza, burgers, steak. There are quite a few such restaurants now in Istanbul, and Big Chef is one of the best. You will definitely see mostly locals there.

Turks take breakfast very seriously—Turkey is probably the only place in the world where you will be invited to someone’s home for breakfast. The next-best thing is to have a long, leisurely brunch at Kahve 6. Try the cilbir, lush pide bread with a layer of spinach and two poached eggs, or menemen, a Turkish dish of tomatoes and scrambled eggs.

Mikla still leads the way with its Scandinavian/Turkish fusion cuisine. The food is world-class, and the views from the top of the Marmara Pera overlook the Golden Horn and the Bosphorus.

Turkish cuisine is world-class, and there are many dishes worth trying, but one standout is hunkar begendi—said to have been a favorite of the sultans. It’s lamb served over an eggplant puree. Delicious! And the best place to have it is at Hunkar in Nisantasi. Also try the simit, a bagel-like bread covered in sesame seeds that is a Turkish staple for snacking. You can find vendors who sell them everywhere. And, of course the mezes, a myriad of small appetizers, are delicious. 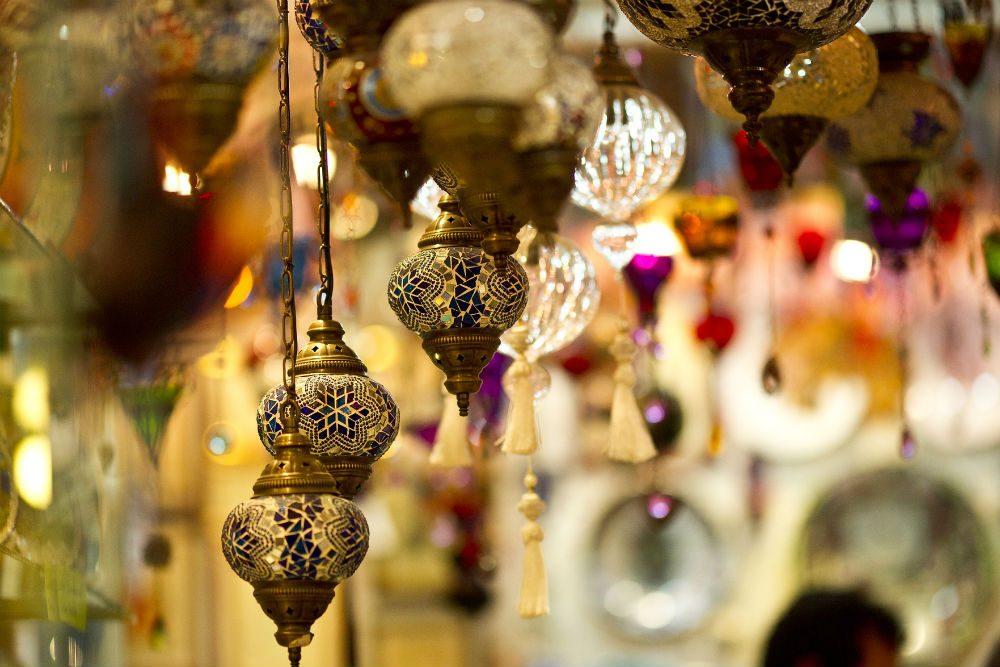 The Asian side of Istanbul, which has many worthwhile places to see, including the beautiful summer home of the sultans, Beylerbeyi Palace, and the charming little village of Kuzguncuk, nearby; Kadikoy and its teeming markets; Bagdat Caddesi, Turkey’s Fifth Avenue, and Camlica Hill, which has incomparable views of the Bosphorus.

Staying in Sultanahmet. Istanbul’s Old City, Sultanahmet, is no doubt beautiful, but it’s also very touristic and you miss out on the real day-to-day life of Istanbul if you stay there. It’s better to base yourself on the European side, where the hotels and restaurants are better. (Both the Old City and the European side are in Europe, but the European side is called that because the embassies to the Ottoman Empire are located there.)

Hidden gem
Rustem Pasa Mosque is a beautiful little mosque with Iznik tile that’s hidden down an alleyway near the Spice Market; it’s definitely worth searching out.

Emirgan Park, which covers 117 acres and is home to April’s Tulip Festival and three lovely pavilions. The Pink and Yellow pavilions are in the Ottoman style, while the White, now a restaurant, is neoclassical.

Once the imperial gardens of the palace of Sultan Abdulhamit II, Yildiz Park is filled with plants from all over the world and has commanding views of the Bosphorus. A porcelain factory that was established there in the nineteenth century, during the reign of Abdulhamit II, is still in operation today.

Downtime
Take a ferry across the Sea of Marmara to lush and lovely Buyukada, the largest of the Princes’ Islands. It’s like going back in time: There are no cars, so you tour the island by bicycle or horse-drawn carriage.

A visit to the ancient St. Nicholas Monastery is considered a pilgrimage, but if the hill is too steep, you can rent a donkey to carry you up.

If you don’t spend a night at the Splendid Palace Hotel in Buyukada, at least go for a cocktail. Entering this 110-year-old gem is like stepping back in time. 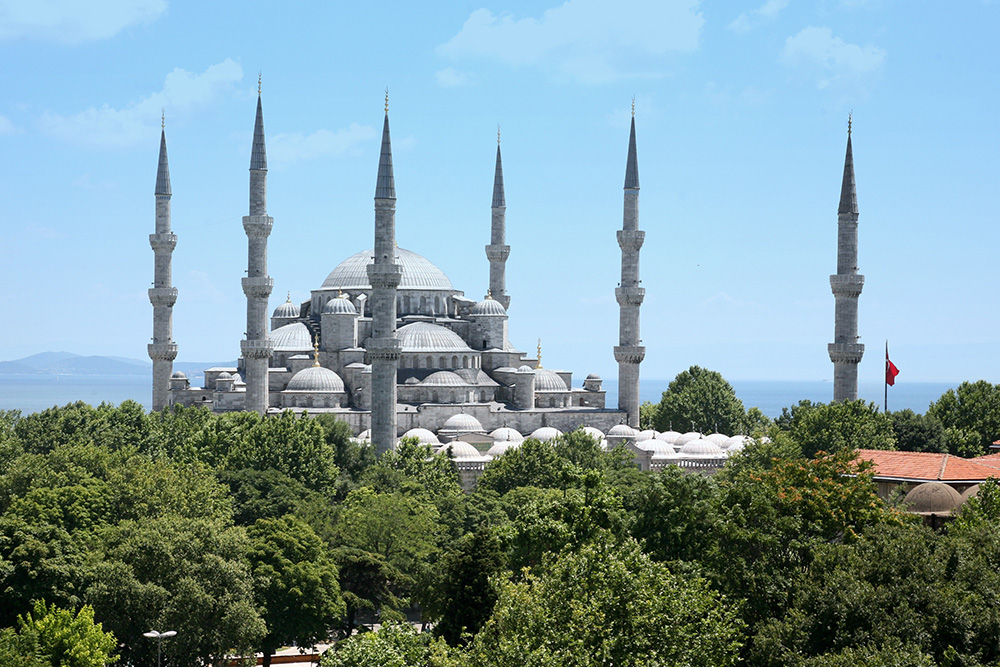 The souvenirs
Evil eyes, lanterns, and hookah pipes make perfect souvenirs and can be found all over the Grand Bazaar in a wide range of prices. Turkish towels are renowned the world over: Haremlique sells excellent ones and also has great linens.

You can’t go wrong at Armaggan, a magnificent store with unique and gorgeous designer items from Turkey.

I like Nakkas has excellent carpets and beautiful jewelry. 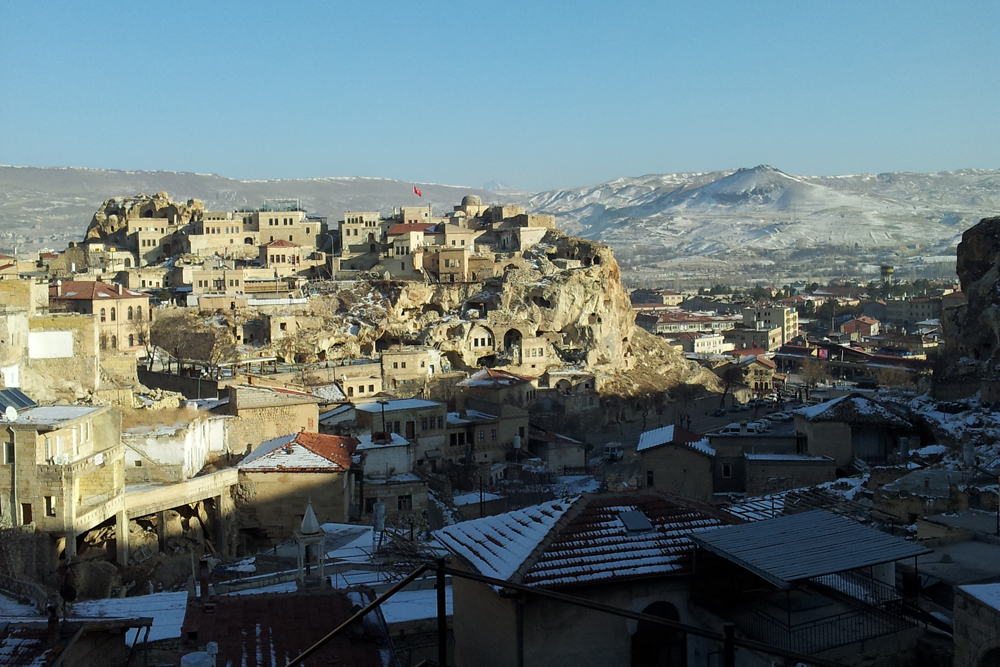 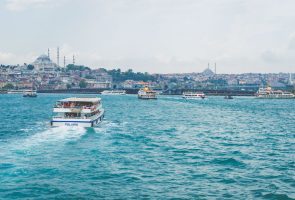 April, for the annual tulip festival, when the city is awash in millions of colorful blooms, and May, June, September, and October, when the weather is at its sunny-and-mild best and before the heat and humidity of summer or the gray rains of winter set in. December is good too: Istanbullus love the trappings of Christmas, and they have turned New Year’s into a similar celebration, with the city beautifully decorated with lights. There’s a huge fireworks display on New Year’s Eve, a night that families get together to exchange gifts and share a special meal.

There’s no bad time to come to Istanbul; it’s a vibrant city year-round. Even in winter you can sit outside, as the restaurants all provide outdoor heating. If you’re sensitive to heat, August can be steamy but not unbearably so—you can always find a cool place to sit.

Turks are a friendly and very helpful people, but they are naturally reserved. They would not normally approach someone unless they perceived they were having a problem. If someone comes up to you and starts chatting, they either want money or to sell you something. These touts can be charming, but they can also waste your time—so be wary. 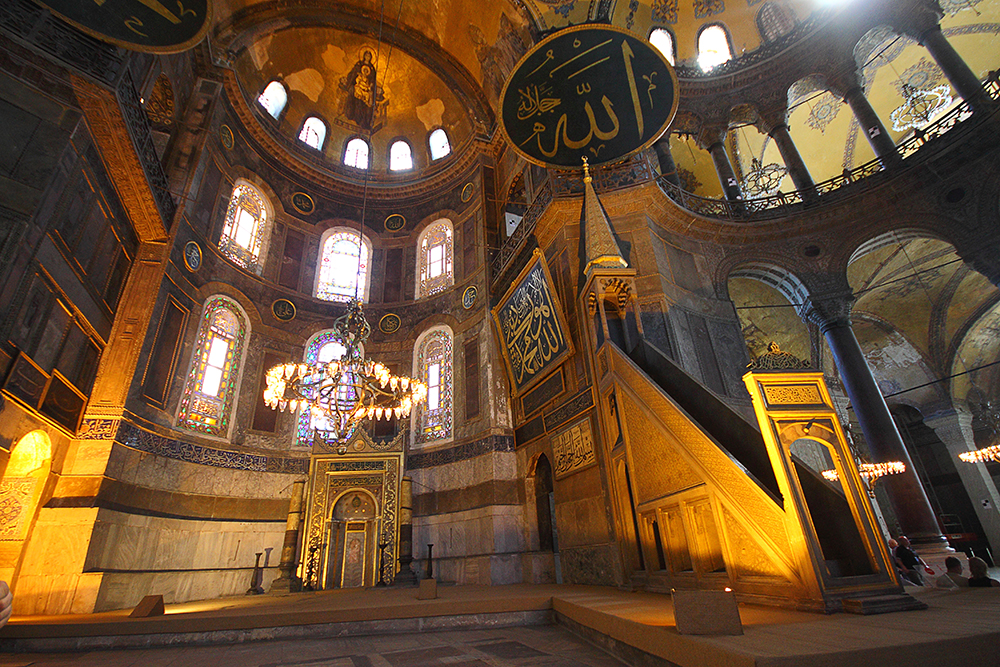 The line to get into Hagia Sophia is sometimes hours long, but Earl can arrange for you to have this massive sixth-century structure, which has served as both cathedral and mosque, all to yourself for two hours, accompanied by one of the city’s best guides. Travelers work up an appetite taking in the domes, arches, mosaics, and other artwork, so Earl typically follows the tour with an elegant dinner at Nar Lokantasi, located in Istanbul’s most chic design store.

Earl can also arrange a tour that includes a visit to the rooftop of the Grand Bazaar (off-limits to most everyone but James Bond, as seen in the movie Skyfall) or a climb to the top of a minaret (though not at one of the city’s iconic mosques).

The art scene in Turkey is booming, and for any of Earl’s guests who are interested in buying pieces or just window shopping, he has a contemporary-art concierge who can recommend exhibits, introduce you to artists, and help organize visits to the hippest galleries in Istanbul.

Galata Tower is popular with tourists for a reason: Come at sunset and put up with the crowds for a glorious photo of the sun setting on the Bosphorus and the city bathed in a warm pink glow.

One really has to be careful of the taxi drivers in Istanbul, especially the ones from the airport. Even though it calls a little more, it’s worth arranging your transfer through Earl or your hotel. It’s always best to take taxis from hotels or restaurants where they’re familiar with the taxi stand. If you must hail a cab on the street, make sure there is writing on the side of the taxi; it means they are from a taxi stand and more likely reliable. If you feel you are being ripped off or have any trouble at all, take down the taxi’s number. Another common scam is that you give the driver a big bill and he shows you a smaller bill and says you didn’t give enough money.

Istanbul Airport is modern and easy to navigate (the domestic and international terminals are connected by a short walkway). It’s good to have a euro coin or a lira coin so that you can get a luggage cart. The baggage allowance on domestic flights is lower than on international flights, so you may want to leave some of your luggage in the secure luggage room to avoid paying extra charges for overweight bags.

You cannot leave a tip on your credit card; tip in cash. Ten percent is customary in restaurants. Turkish people do not tip taxi drivers.

Bring a European plug for your electronic equipment. Women should bring their own headscarf for visiting mosques. Some of the streets are made of cobblestones, so a comfortable pair of shoes is a must.

Less expensive than the group...