Five-Star Brazil: Insider’s Guide to the Best Things to See and Do 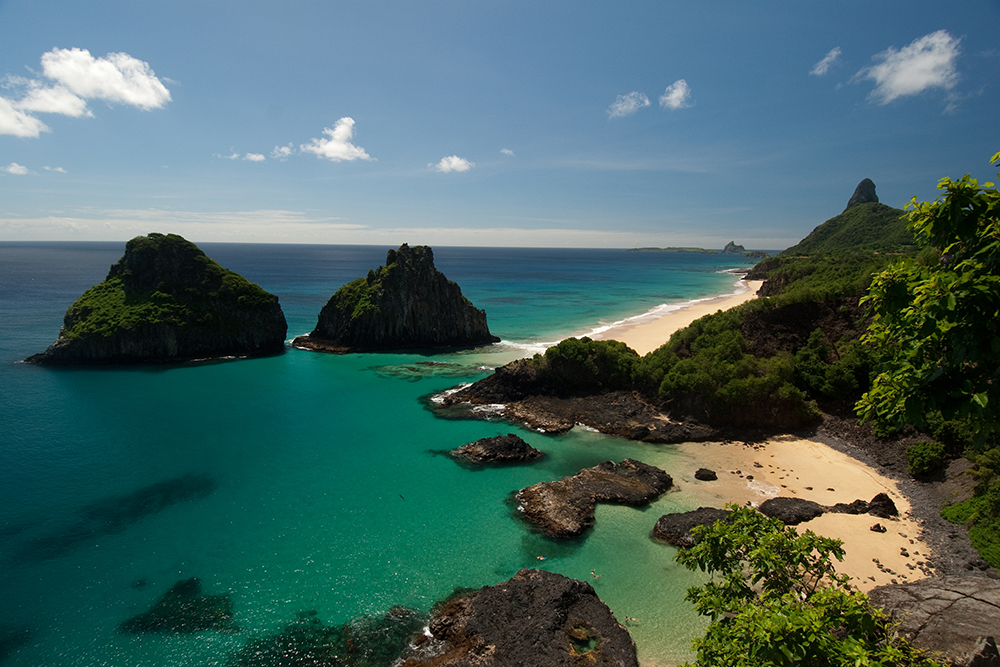 The Fernando de Noronha archipelago, off the northern coast of Brazil, has some of the most stunning scenery in the country, including the famed Doie Iramoas hills. Photo: Matueté

The insider advice on this page is from one of Wendy’s Trusted Travel Experts for Brazil: Martin Frankenberg of Matueté.

A former tech executive and Brazil native who is based in São Paulo with an office in Rio de Janeiro, Martin opens doors in his country that nobody else can—such as to his portfolio of exclusive Rio apartments, snazzy beach villas, and private farmhouses throughout the country. He orchestrates bespoke itineraries throughout the country, but is particularly known for offering the most magnificent custom-tailored experiences of the Amazon in existence. In addition to cultivating relationships with the region’s top hoteliers and convincing anthropologists and biologists to moonlight as guides, he holds a spare set of keys to many of the finest private yachts in the Amazon, which he regularly charters for his travelers for the ultimate adventure. 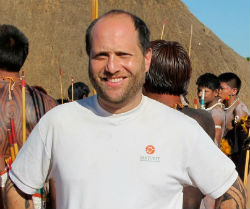 The rule of three

For first-timers to Brazil, it’s easiest to divide the country into three regions: beaches, cities, and nature. Ideally, you’ll see at least one example of each, and spend at least three nights in each destination (since the country is large and connections are less than ideal).

Lençois Maranheses National Park is a desert of white sand dunes, dotted with thousands of crystalline fresh-water lagoons; it’s like nothing you’ve ever seen before, and it’s completely undiscovered by international tourists. If you don’t mind roughing it in the basic accommodations that are available nearby, come to walk and quad-bike around the dunes, and to go swimming, boating, and kite surfing in the lagoons.

Paraty is a quaint little colonial village on the coast halfway between Rio and São Paulo, where the mountains drop into the sea; it’s one of the most gorgeous bays in the country, and a perfect place for travelers who want culture and history with their beach time.

The historic towns of Minas Gerais, first settled by gold-seeking Portuguese in the 17th and 18th centuries, are overlooked, even though they’re within driving distance of Rio; we prefer it that way, as it conserves their baroque beauty.

Most overrated place
Florianópolis is known for its beach parties; Porto de Galinhas and Morro de São Paulo for their lovely stretches of sand and sea. But none of the three have accommodations that will suit sophisticated, high-end travelers—and Florianópolis is cursed with awful traffic jams. 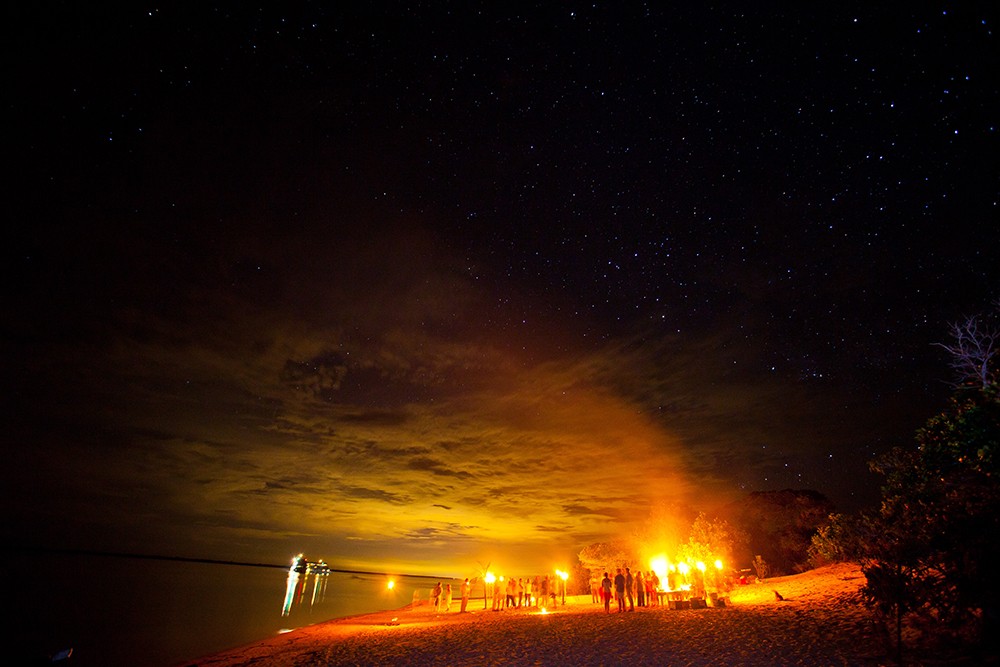 The Tapajós River, in the Amazon region of Brazil, is one of the area’s hidden gems. Photo: Matueté

The Tapajós River is one of the rare blue-water sections of the Amazon region—the “Caribbean of the Amazon,” according to Jacques Cousteau. This is one of the most beautiful and well-preserved areas of the river system, accessible only by private yacht.

Most travelers stay at a jungle lodge when in the Amazon. By chartering a private yacht instead, we can start your trip where the typical tourist circuit ends, allowing you to take a much deeper dive into the “Lungs of the World.” The range of yachts we have access to runs from rustic adventure cruisers to Mediterranean-style luxury vessels. You pick the one that best fits your group and style, and we bring aboard our highly trained crew and guide, who can arrange everything from a private dinner on a secluded beach to a jungle survival course for your kids. See our Insider’s Guide to the Brazilian Amazon.

On Sunday the main beach avenues in Rio close down to traffic and turn into huge bike lanes. Go for a ride after breakfast and then enjoy the afternoon lying on the beach—it doesn’t get more local than this. 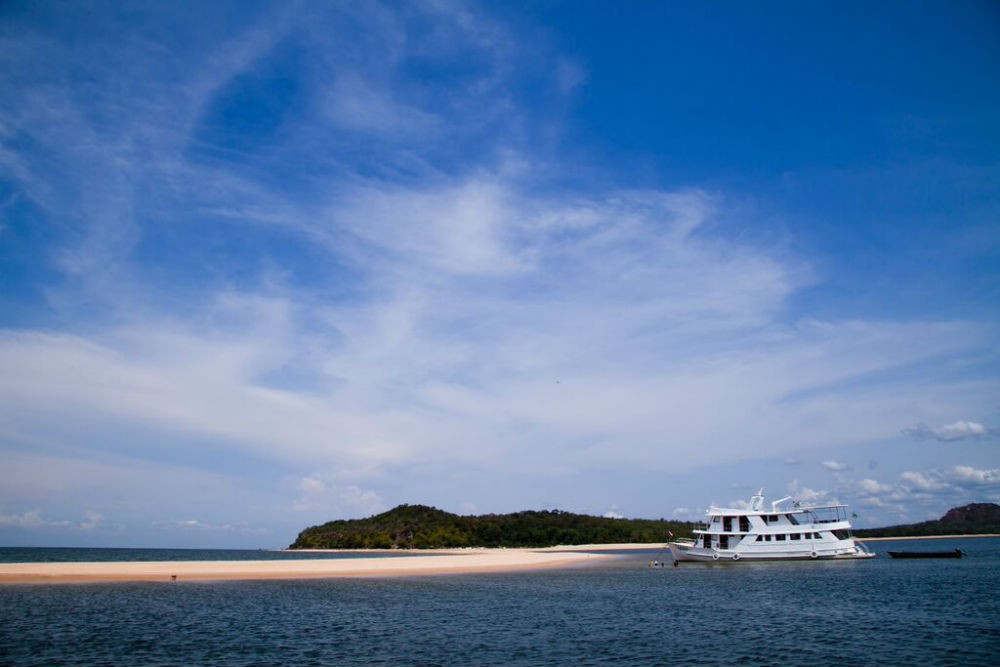 Setting sail aboard a yacht on the Tapajos River. Photo: Matueté.

In Minas Gerais, the Reserva do Ibitipoca is the best countryside/farm hotel in Brazil, expertly straddling the line between luxurious and rustic. And with rates starting below $500 per couple, including all home-grown meals and activities (guided hikes, horseback riding, mountain biking, birdwatching), it’s hard to find a better value. Profits from the 18th-century farmhouse-turned-hotel support the nearly 10,000-acre reserve, as well as the local community.

Restaurant the locals love
Salvador has plenty of touristy spots, but you’ll find the locals at Paraíso Tropical. It feels like a farm in the middle of the city, and the trees surrounding the dining area contribute their fruit to many of the dishes. Try the moqueca, a fish stew made with the restaurant’s own coconut milk.

Dish to try
Even people who don’t normally like saltwater fish enjoy the less sharp flavor of an Amazon catch; pirarucu is the largest fish in the region, and Banzeiro Restaurant, in Manaus, does a delicious barbecued version.

If there’s one national dish in Brazil, it’s feijoada, a bean stew usually made with pork and served with rice. Bar do Mineiro, in Rio’s Santa Teresa neighborhood, is an especially atmospheric place to try one excellent version.

Meal worth the splurge
D.O.M., in São Paulo, makes it onto every list of the world’s best restaurants; no other restaurant has turned native Brazilian ingredients into such haute cuisine. Plan ahead, as the tables fill up months in advance. 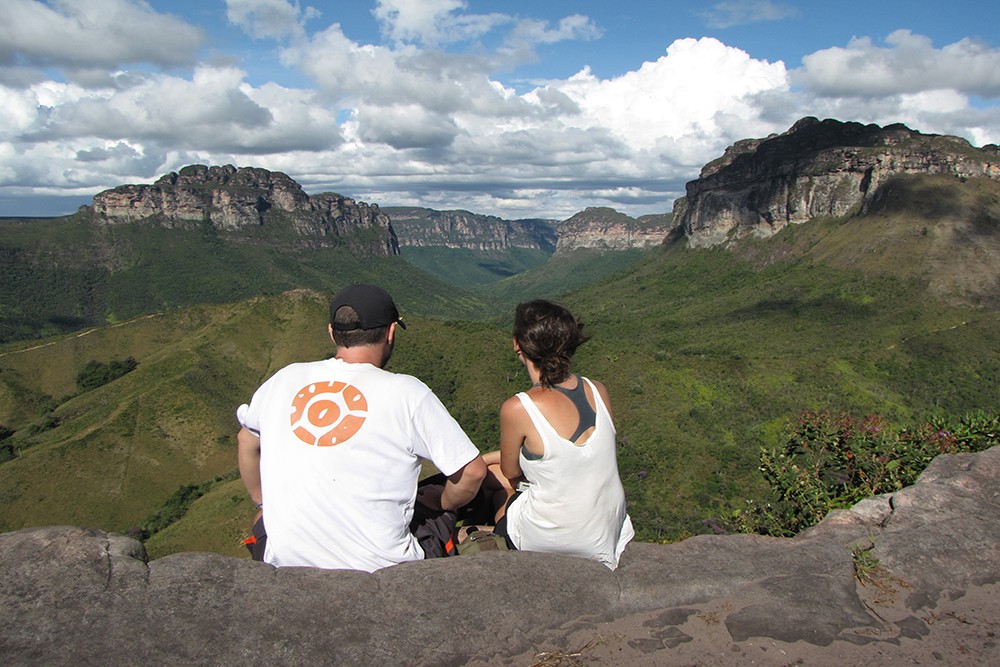 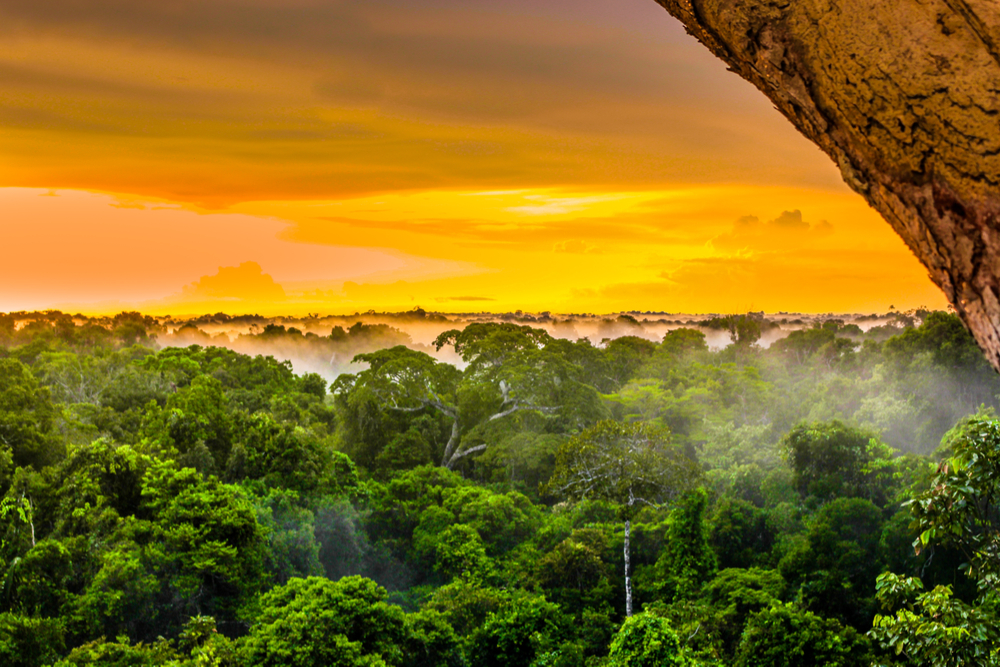 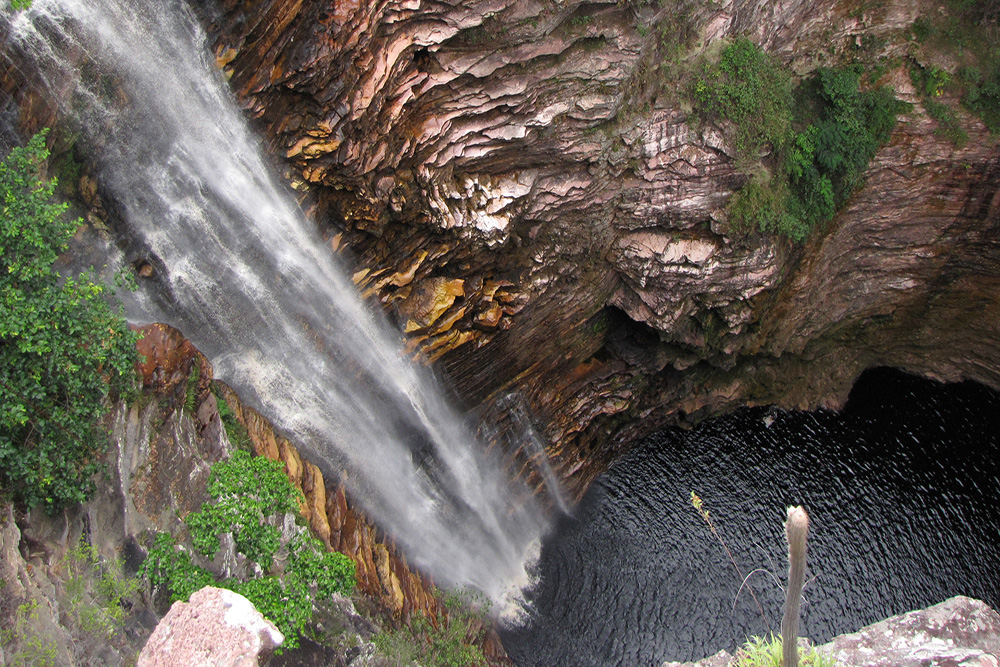 Given its large mass and varied geography, the perfect time to visit Brazil depends on what parts of the country you hope to see. Salvador and Trancoso, in the northeast, are sunny and pleasant from December to March; the Amazon’s “dry” season runs from August to December, when it rains much less, the river levels go down, and beautiful beaches form. You’ll have the best animal sightings in the Pantanal wetlands from May through August. Rio is a year-round destination, but you’ll get the sunniest skies and a more gentle mood in April and May.

Carnaval and New Year’s are major holidays in Brazil, with crowds and prices to match. If those details don’t dissuade you, joining in the revelry can be a once-in-a-lifetime experience—and we know some hidden gems that you can get away to after you’re done partying.

Thinking you’ll see abundant wildlife in the Amazon; the Pantanal is actually the place for that, although in the Amazon you’ll see lots of birds, fish, piranhas, and sometimes river dolphins.

Relying on credit cards or ATMs; outside of São Paulo and Rio, be sure to have cash, in local currency.

Sunset on Fernando de Noronha, the largest island in the same-named archipelago off the country’s northern coast. From August to December, the sun is perfectly framed by two hills (the Dois Irmãos) as it dips below the horizon.

Samba is music made by the people, for the people; to be charged outrageous prices to hear it in a sterile environment surrounded only by rich gringoes completely misses the point—but that’s what you’ll get at one of the “samba houses” in Rio de Janeiro. Better to hear it on the street (such as in the very traditional Pedra do Sal neighborhood every Monday), or at one of the bars in the Lapa district, where locals and tourists mix. Anytime between August and Carnaval, we can also get you into a samba school’s rehearsal session for a truly authentic experience. 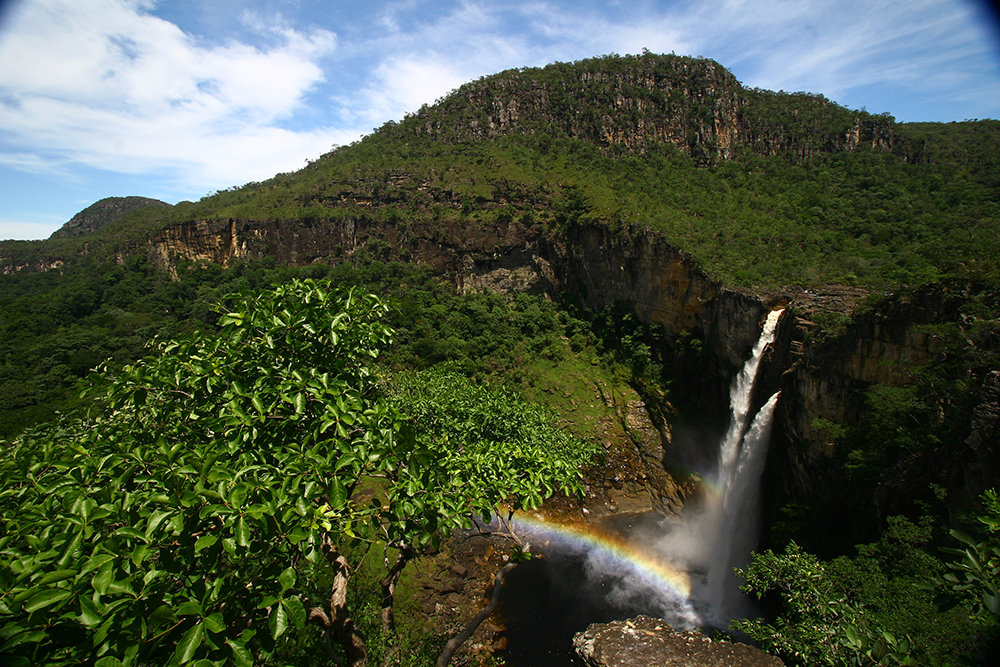 A cachaça (a liquor made from sugar cane) produced in a small, artisinal distillery in Paraty—not the industrial versions you’ll find at the airport.

Bike Rio and, in São Paulo, Bike Sampa let you borrow bikes to ride around the city. Each system has lots of stations, but make sure to check the tires before riding away. Biking is an effective way to avoid traffic and get to know the cities, which have surprisingly good networks of cycle lanes.

Gate assignments often change at Brazilian airports, and you probably won’t understand the English announcements, so pay attention to the monitors. Also be aware that both São Paulo and Rio have two airports; make sure to check which airport your flight departs from.

In restaurants there is a 10% service fee already included in the bill; you needn’t add anything more.

Mosquito repellent is always useful, even in cities.

We really wanted to see jaguars…

Our best trip ever.

"We were in paradise…"