Croatia: Insider’s Guide to One of Europe’s Most Popular Spots 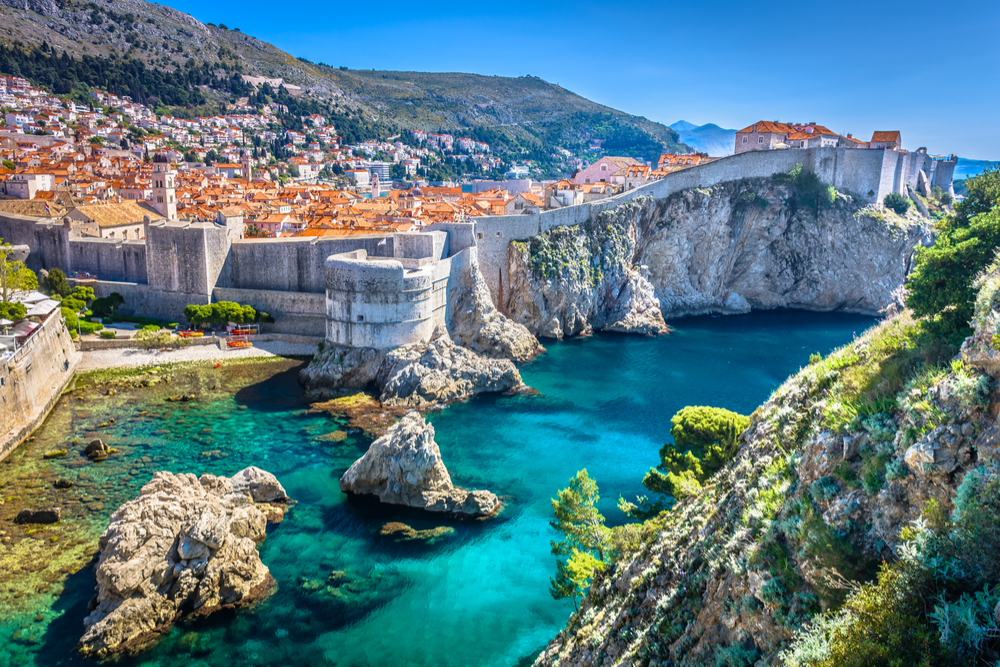 Get a different perspective on the old town of Dubrovnik, Croatia, by seeing it from the water. Photo: Shutterstock

The insider advice on this page is from one of Wendy’s Trusted Travel Experts for Croatia: Ala Osmond of Exeter International.

Thanks to frequent trips to the former republics of Yugoslavia during the nearly two decades she spent in the hotel industry in Europe, Ala excels at crafting itineraries that combine the coastal must-sees (think Dubrovnik and Kotor) with historic gems (think Sarajevo and Split) and the picturesque countryside in between—all while avoiding tourist traps, navigating travelers around the cruise-ship crowds that plague the coastal cities, and wisely negotiating border crossings. Food and wine are a priority for most of her travelers (and for them she can arrange truffle hunts, in-home cooking classes, and workshops with local artisans). Charming 5-star and 4-star hotels are a focus for her: She’s always up on the latest openings and will warn you away from the more run-down boutiques. Ala can also charter crewed luxury yachts along the Croatian and Montenegrin coasts, for either day trips or multi-night voyages. 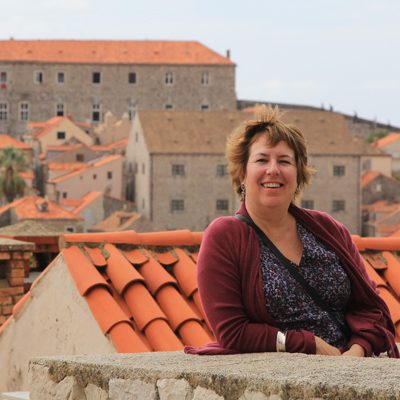 The Maslina Resort on the island of Hvar is located 25 minutes from the characterful hidden gem of Stari Grad. Broad ocean views from the majority of the rooms, a stunning spa, and the culinary excellence you would expect from Relais & Chateaux property make it possibly the best hotel in Croatia. There are no bad rooms here, but Ala’s favorites are the Panoramic Sea View Rooms and Bay View Suites. If you are traveling with family or friends, the resort’s private villas are the ultimate in privacy and service.

Restaurants the Locals Love
In Split, Bokeria Kitchen & Wine Bar pays homage to the culinary fabulousness of the whole of Croatia with only the freshest seasonal local ingredients and great wines, served by knowledgeable staff in a gorgeous setting. Also check out their fashionable sister restaurant, Pizzeria Bokamorra, for inventive pizzas. 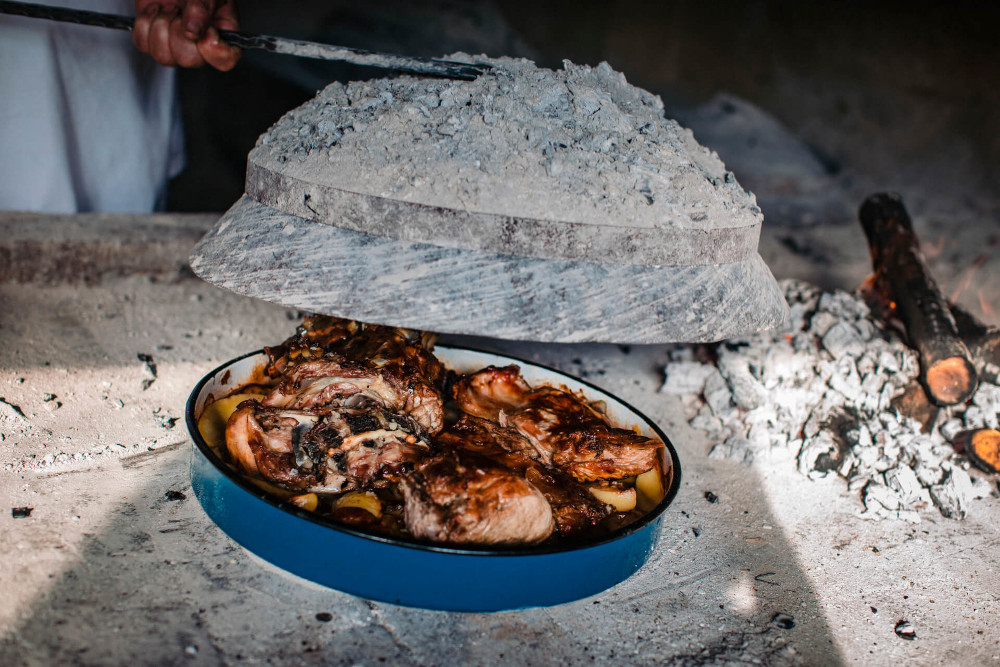 Peka is a traditional, hearty dish of vegetables, fall-off-the-bone meat, and plenty of herbs, all slow-cooked in a domed metal pan set over a fire. Photo: Katija Zivkovic

Dish to Try
While Croatia is a land of fabulous seafood, don’t miss the traditional peka, a hearty dish of vegetables, fall-off-the-bone meat, and plenty of herbs, all slow-cooked in a domed metal pan set over a fire. Konoba Dubrava, five minutes’ drive from Dubrovnik’s Old Town, serves a particularly fine version. It takes several hours to prepare, so make sure you pre-order at least 12 hours in advance.

Meal Worth the Splurge
Monte, in the beautiful Istrian town of Rovinj, focuses on the abundant local produce. It received the first Michelin star in the country but retains an unstuffy atmosphere. Order the five- or seven-course tasting menu, accompanied by a stellar Croatian Malvasia wine. Children are welcome and specially catered to. 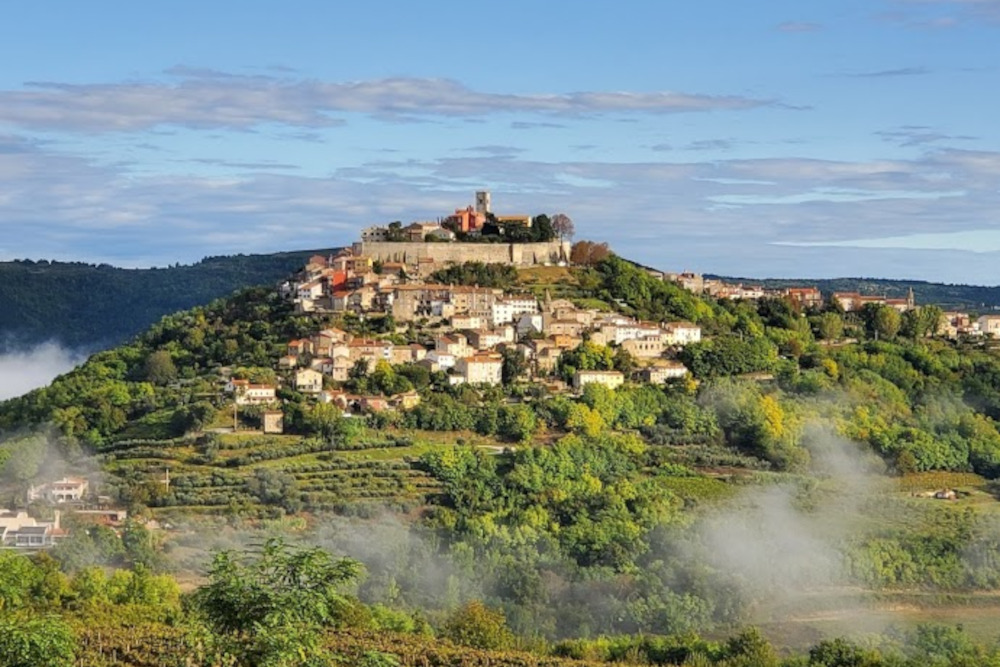 The Istrian Peninsula is underrated by many travelers, but it’s rich with Roman ruins, Venetian architecture, and hill towns (like Motovun, pictured) reminiscent of Tuscany. Photo: Exeter International

Most Underrated Place
Istria, while becoming better known, is still considered by many travelers the poor cousin to Dalmatia. The Romans called Istria terra magica (magical land), and even today you can feel the strong Italian influence in the architecture and food. Truffles and pasta are a focus on many menus, and Istria is the culinary center of Croatia. Resplendent with Roman ruins, Venetian architecture, and a landscape reminiscent of Tuscany, Istria is well worth a visit; it’s also home to some of the country’s finest hotels.

Most Overrated Place
Plitvice Lakes is the most famous of Croatia’s eight national parks, so it’s crowded all year long—extremely so in summer. For hiking or kayaking, go instead to Krka National Park, close to Split. 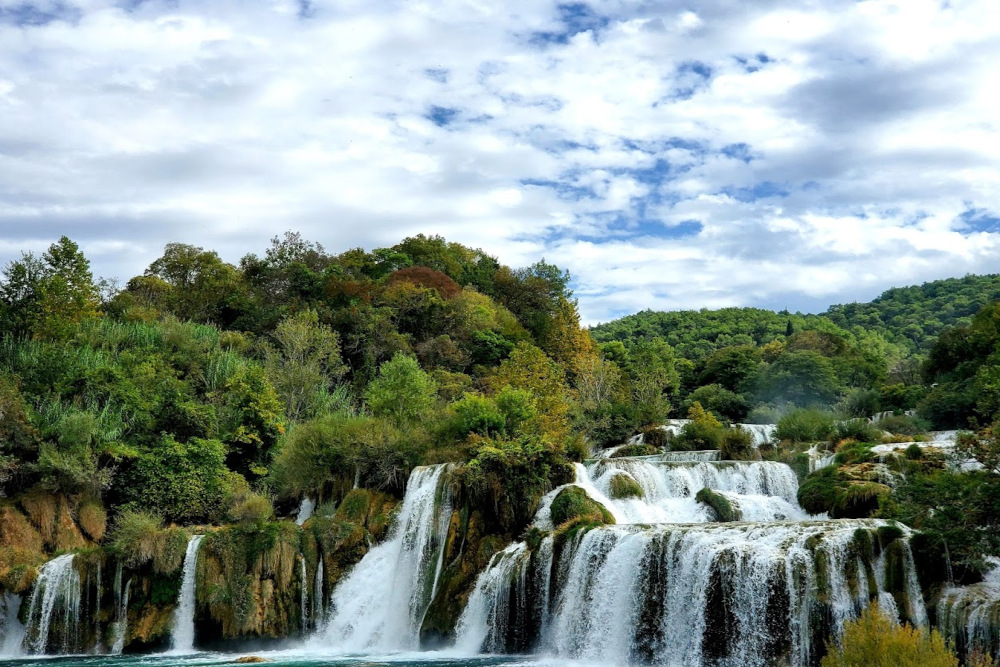 For a taste of nature, go to Krka National Park instead of overcrowded Plitvice Lakes.

Hidden Gem
Stari Grad (literally Old Town), on the northern side of Hvar Island, is full of atmosphere, with winding cobbled streets and beautiful hidden squares. If you’re staying on Hvar, it’s the perfect place to stroll before dinner in a local restaurant.

Don’t Miss
If you choose one thing to splurge on in Croatia, hire a private boat for a day or more to take in the natural beauty of the Adriatic. Having your own boat allows you to visit secluded coves and other parts of the islands that are otherwise inaccessible and gives you a completely different perspective on the mainland. 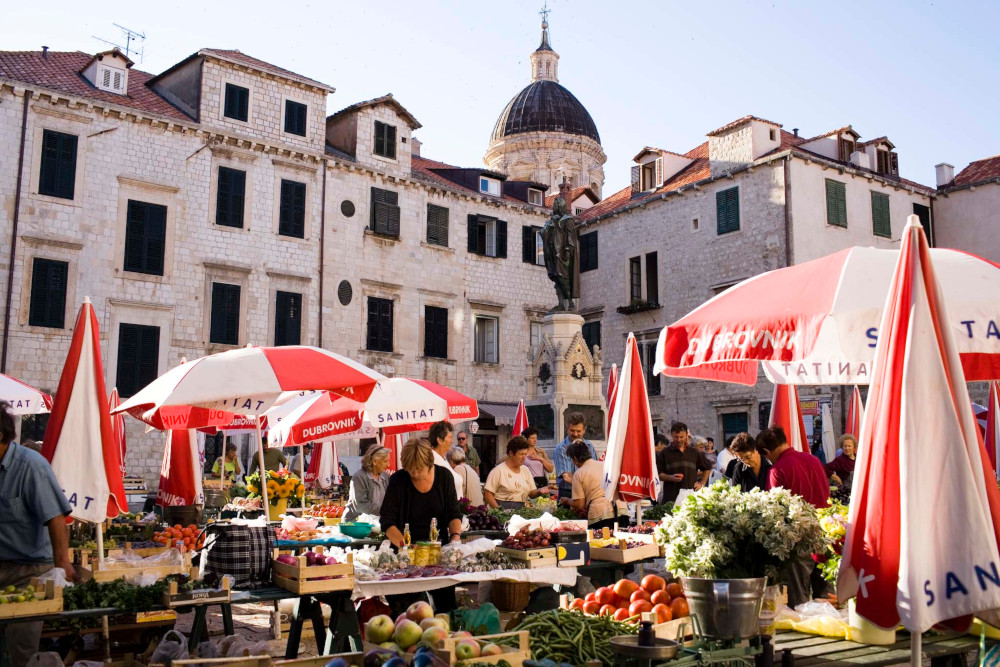 You’ll find an abundance of both fresh produce and local shoppers at any of Croatia’s open-air food markets. Photo: Rob Howard

Cheap thrill
You’ll find an abundance of both fresh produce and local shoppers at any of Croatia’s open-air food markets; one of the most extensive outside Zagreb is in Split. Go early in the day with a local guide to sample the produce and connect with the traders.

How to Spend a Lazy Sunday
Sunday in Croatia is all about family. Although almost everything is open as normal (as the country derives most of its GDP from visitors), the best thing to do on a Sunday is to have a long, lazy lunch and people-watch the locals. In Split, promenade along the Riva and embrace the café culture. In Dubrovnik, take a seat at Kopun, a restaurant that specializes in very traditional recipes and is located in one of the prettiest squares in the old town—Boskovic Square. In Istria, lunch overlooking the hills at Konoba Tončić is a must. 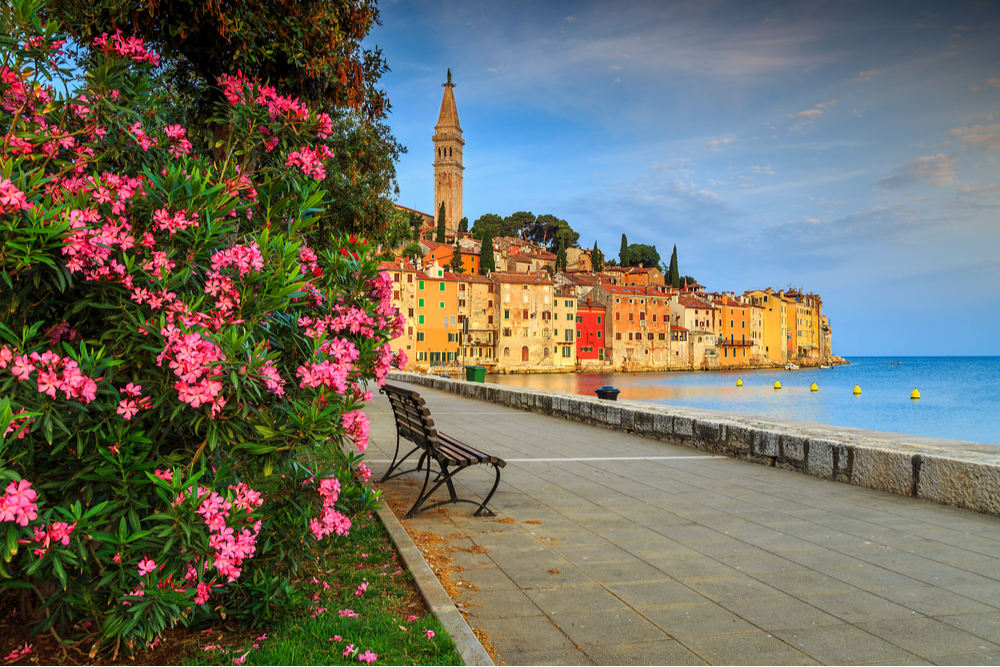 Rovinj is one of the charming towns in Croatia’s, Istrian Peninsula—and its home to the restaurant that received the country’s first Michelin star, Monte. Photo: Shutterstock 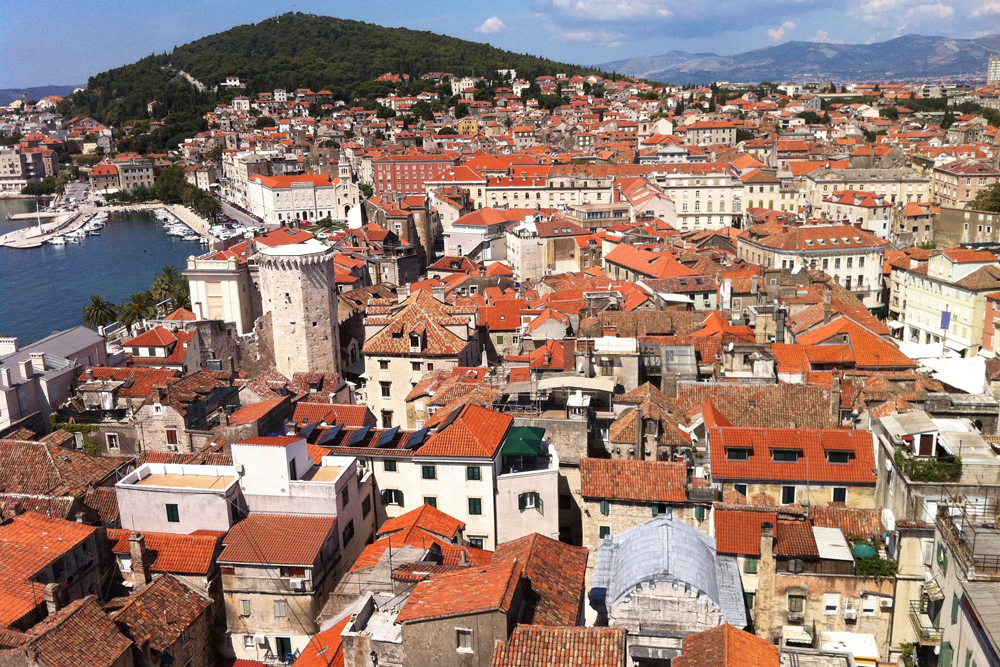 Late April, May, September, and the first half of October have good weather, fewer tourists, and lower hotel prices than at the height of summer.

July and August are very busy with both European travelers and cruise-ship passengers, and some hotels have a four-night minimum or charge higher rates for shorter stays.

November through March are wet and cold. 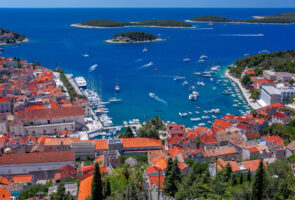 Thinking that you can easily jump on a ferry with your rental car. Croatia has 1,000 islands that are connected to the mainland by a network of ferries and catamarans, many run by the state company, Jadrolinija, and others private. Between June and September there are 500 departures; the options can seem overwhelming, and the booking process is complex. Without the assistance of an expert to help arrange anything more than a simple day trip, you can easily spend three-plus hours waiting in line for a car ferry.

Do not attempt to add Montenegro or Bosnia as a day trip. You will spend more time in the car—and possibly in a line at the border—than in your destination. You need at least two nights to add another country to your Croatia trip (or just one if all you want to see is Mostar, in Bosnia).

A shot from the top of Dubrovnik’s Srd Hill, in the early morning or at sunset, captures the postcard views of the Old Town’s red roofs and white walls, and the azure waters of the Adriatic. You can hike or take a cable car to the summit.

It’s easy to drive around Croatia, but parking can be a challenge, especially in summer. Come prepared with the excellent PayDo app, which covers parking in 77 Croatian cities.

You may need to bring an additional bag just for the bottles of olive oil, truffle oil, and wine that you’ll want to carry home. (Some vendors also sell protective boxes for these bottles). Easier to pack is one of Croatia’s most famous inventions: the silk cravat, which originated here in the 17th century. Silk and embroidery are also major crafts in the Konavle region, close to Dubrovnik, where you can visit local artisans.

A microfiber towel that folds up small and dries quickly is great for drying off after an impromptu dip in the sea, or as a picnic blanket in a secluded spot.

"Thank you for your incredible..."