How to Choose the Right Boat for Halong Bay, Vietnam 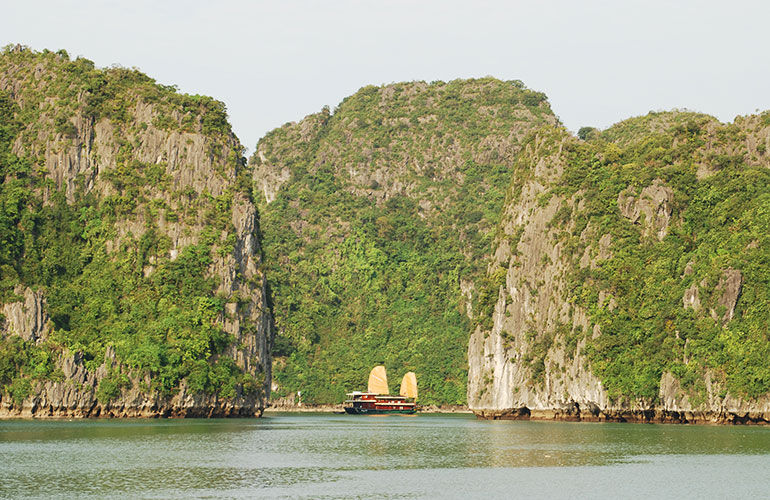 Your post about Billie Cohen joining WendyPerrin.com includes a picture of Ms. Cohen cruising Halong Bay. I’m wondering if she’d be willing to share her thoughts on that excursion and destination?  My wife and I (with my brother and sister-in-law) are planning our first visit to Vietnam—specifically, Hanoi and Halong Bay—this fall, and we’d be grateful for any recommendations on which ship to sail on and the best way to make reservations.  Thanks!

Hi Doug, Billie here. That’s a great question, and of course I’m happy to answer it. To get up-to-the-minute intel, I spoke with April Cole, two of Wendy’s Trusted Travel Experts for Southeast Asia.  We recommend working with an expert like April who can match you to the right boat for an extraordinary experience and put you way ahead of the crowd

Think about the size of boat you want

There are all kinds of ships, from small and private to large and almost cruise-ship-style, and they range in price from backpacker to luxury. So you need to be aware of your budget. I prefer smaller boats; the service is better, and you get a more intimate experience.

Know which bay you’re going to

There are actually two bays; Halong is the bigger bay, and it’s where the majority of ships go. Bai Tu Long Bay is smaller, and for years no one had permission [from the government] to sail there. A few years ago, the government opened that bay to a specific company, Indochina Junk, and they run the Dragon’s Pearl boat and offer some private boats too. (They got permission by doing philanthropic work with the villages in that bay.)

The benefit of Bai Tu Long Bay is that you’re one of few boats in the bay, whereas Halong Bay can sometimes be like rush hour. The government regulates where the boats anchor, when they go out, etc.

However, the boats in Bai Tu Long Bay are not as luxurious as some of the ones in Halong Bay. I arrange private boats with your own guide and cook. Especially for families, it’s a great way for them to have their own space and activities and feel like they’re having a more intimate experience.

Consider whether you want to sail for one or two nights

With most companies, you go out on a big boat the first day, and on the next day, you get on a little boat that takes you around (while the big boat goes back and picks up new people), and then you come back to the big boat. So there’s no difference between your second night and the first group’s first night. It’s a little less personalized—you feel a bit shuttled around. The ships I recommend, through a company called Indochina Junk, do a dinner in a cave on the second night, which is pretty spectacular.

Once you board the boat, you’re stuck with it, so ask a lot of questions up front to make sure you’re purchasing the experience you want.

•How many cabins are on the ship (to determine size and intimacy of the experience)?

•Can you handle special meal requests?

•Do you provide a shared transfer or a private transfer? Usually, the company picks you up from your hotel for the three-hour drive from Hanoi and brings you back, and if you opt for a shared ride it’s a good way to bring the price down, but it can add time to your travels.

Talk to the crew

It’s easy to go sit on deck and watch the views go by—because it’s absolutely stunning—but if you want to have those intimate moments of experiencing the culture and the people, befriend the captain and crew.

Since you mentioned you’re also going to be in Hanoi, we picked April’s brain for insider tips for that city as well. Here’s what she had to say:

Choose a hotel in the Old Quarter

Picking a good hotel with a good location is one of the best things you can do. In Hanoi you want to be downtown in the Old Quarter, because that’s where the culture and the people come together.

Know what day is it

On Monday, everything is closed—all the museums. So make sure you don’t plan to tour the city tour on a Monday, because you’ll be disappointed.

Be respectful of the country’s history

For Americans, it’s good to keep in mind that Hanoi was the seat of Communism during the war, so a lot of what you’re seeing is propaganda. You might hear things that aren’t true—your guides have to say what they have to say. Don’t get offended; this is propaganda and you have to see it as that.

The cool thing about Hanoi is its balance between ancient and modern. You’ll turn one corner in the Old Quarter and see a woman carrying a traditional basket and she’ll make you soup right there out of her basket. And then you can walk a few blocks and you’re in the financial district and it’s a very capitalist society.

The other thing to remember in Vietnam, especially in Hanoi, is that people are tough. They’ve been through some wars; they can take care of themselves; they are feisty. A lot of our guests come from somewhere quieter, like Laos, and they are surprised. Hanoi is such a bustling city, and there is so much going on there. It’s loud, and busy, and you could get ripped off—and it’s important to come in knowing that’s what you’re going to see. But when you get to talk to people one on one, they’re just so nice. This is one of my favorite places.

I really like the Temple of Literature, even thought it’s very touristy.

I also suggest getting out of Hanoi for a day. I can arrange tours that go to old villages where you can meet the village chief and have lunch. If you’re on your own, you can go to “handicraft” villages, where lacquer, woodworking, and sewing thrive. Just say to your guide: We want to get out of Hanoi and visit a village or go to a market. When you get there, go one step further and ask questions of the villagers. Everyone waits for those magical travel experiences to happen, but sometimes they need a push. [The villagers] are used to seeing a lot of tourists, but they’re not used to telling their stories—and people love to talk.

People want to see Uncle Ho. But if the line is long, I tell my guests it’s not worth it. Instead, try the Ho Chi Minh Museum—it’s nearby and it’s fascinating. It’s a tribute to Ho Chi Minh, so for some Americans it’s off-putting, but it’s smaller and not as visited, so you don’t see a lot of tour groups there.

Be careful crossing the street

The city itself is fascinating, but you have to remember that crossing the street is dangerous. I suggest finding a little old lady—one who has the traditional baskets. Then literally stand next to her and cross when she crosses.

I encourage my guests to be adventurous—Hanoi has great street food. I like Banh Cuonziet in the Old Quarter, started by a woman name Le Thi Thanh Thuy. They cook traditional Vietnamese steamed rice balls out front on the street, and you choose what you want in it.

Now's the Time For Caribbean and Mexico Beach Resort Deals

Uzbekistan Is the Family Vacation Idea You've Been Missing

Dispatch from Turkey: What Travelers Can Expect in Istanbul and Beyond

12 Beautiful Bookshops Around The World

Summer Vacation Idea: British Columbia for Every Type of Traveler

Winter Escape: 10 Places You’d Rather Be Than in This Cold Weather